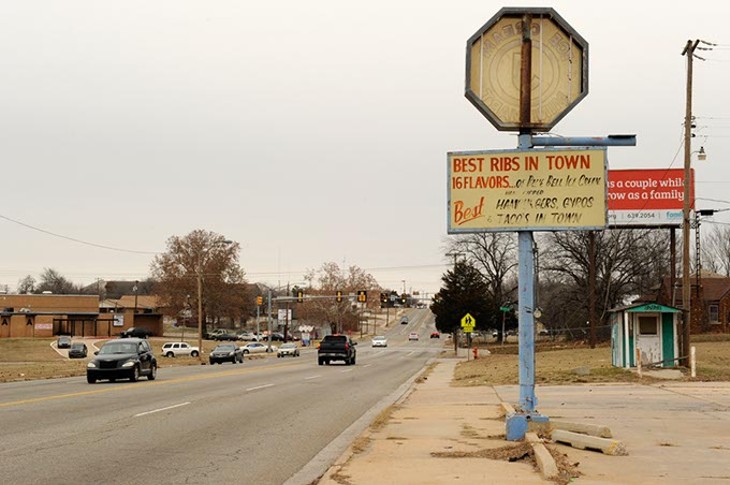 Kenneth Barnes works eight-hour days, then rides the No. 22 bus for nearly an hour — as far as he can — before another seven-block walk to his house near Edwards Park.

“It’s a job,” Barnes said when asked if the commute bothers him. “I’m happy to have a job.”

Nearly 1 in 5 residents in the 73117 ZIP code — where Barnes lives — are without work. The area east of the University of Oklahoma Health Sciences Center medical complex might be one of the city’s largest employment hubs, but its residents suffer with the metro’s highest unemployment rate.

With a median household income half the state average, this mostly African-American community is an economic desert in a city that frequently makes headlines for its recent economic growth.

However, after years of public investment in downtown and midtown communities, the city is preparing to use urban renewal and tax-break tools in the northeast.

“This is the first true major economic development plan for northeast Oklahoma City,” said Ward 7 Councilman John Pettis Jr. “Years ago, there were different, smaller plans, but this is the first plan that actually lays out true economic development for northeast Oklahoma City, using the plan the city has used in other neighborhoods.”

The Oklahoma City Council recently approved the creation of the Northeast Renaissance Redevelopment district. It opens stretches of 23rd and 36th streets, Martin Luther King Avenue and other northeast OKC thoroughfares to urban renewal plans and policies. This month, the council also will be asked to approve a new tax increment financing (TIF) district to encourage development through property tax revenue.

“The neighborhood could use some help,” Barnes said in front of a doughnut shop sandwiched between two vacant storefronts.

Some residents say they are happy about the city’s drive to improve the area. However, they also have many questions and concerns. Many longtime district residents say that prior development plans and promises of blight removal ended without meaningful results.

“The plan is apparently a good plan, but there are some areas we identified that need to be more specific,” said David Sparks, president of the Capitol View Neighborhood Association. “We were not informed about most of the meetings held over the past year on this.”

Gina Blaylock, another northeast resident, wants to know why some neighborhoods were omitted from the new district. “We do have a lot of vacant property around there,” Blaylock said about her neighborhood.

The approved district gives the city’s Urban Renewal Authority power to enforce building policies and redevelopment requirements, along with the ability to use eminent domain to acquire properties that do not fit neighborhood development goals.

As one example, Pettis cited a recent need for eminent domain with a proposed grocery store at 23rd Street and Martin Luther King Ave.

“Sadly, just east of their proposed development, [there is] a crack prostitution hotel where the owner refuses to turn it into something that is good,” Pettis said. “That’s what eminent domain will be used for.”

Many residents who spoke with Oklahoma Gazette said they wanted dilapidated and crime-tied businesses cleaned up or removed. However, they’re also concerned about what eminent domain enforcement could mean for residents.

During a discussion of the plan at last week’s council meeting, Ward 1 Councilman James Greiner said he was not comfortable expanding eminent power for the Urban Renewal Authority. Also, Ward 2 Councilman Ed Shadid asked that the council be allowed to make final eminent domain decisions.

“[Eminent domain] shouldn’t be [decided by] just five unelected people,” Shadid said, referring to the Urban Renewal Authority. “It looks like we are going to be using eminent domain as a law enforcement mechanism or a means for retribution for those who won’t play ball.”

Shadid’s proposal to require the area’s eminent domain decisions to come before the council was voted down by the council 6-3.

This month, the council also will be asked to approve the creation of a new TIF district to further encourage development in the new district. South of the new district, the city has another existing renewal district in the area. However, urban renewal officials said the absence of TIF funds prevents redevelopment in the older district and also will inhibit growth of the new area.

“We really didn’t have any additional resources that we might be able to use to make redevelopment happen,” Cathy O’Connor, director of The Alliance for Economic Development, told the council in her presentation about northeast TIF use.

City officials said they want to inject new economic life into the northeast, which, if successful, could improve income levels, access to retail and employment opportunities in a community that ranks low in each area.

“I feel pretty excited about what is getting ready to take place,” Pettis said. “This is a new day for the northeast.”

Print headline: Infrastructure, Recent Northeast Renaissance Redevelopment district designation means that some of OKC’s most in-need neighborhoods might soon get the attention they deserve.