During the late 2000s, paintball was a fairly popular pastime. Nearly 5.5 million people nationwide played at least once in 2007, according to a report from the Sporting Goods Manufacturers Association, making paintball one of the most popular extreme sports in America.

By 2013, participation had fallen to 3.5 million and domestic sales of paintball equipment had dropped from an estimated $240 million to $139 million, according to the Sports & Fitness Industry Association. Paintball manufacturing facilities and parks were closing across the country. Many analysts blamed the Great Recession, and golf saw a similar decline in participation.

Dustin Hester — a veteran paintball player himself — blamed something else. The Oklahoma City resident said that industry leaders moved to make paintball more and more extreme, designing markers that fired up to 20 paintballs per second and marketing the sport to experienced thrill-seekers, mostly male.

That shift in attitude influenced Hester and his wife, Leslie, to fulfill their dream of opening their own paintball park.

The dream is now a reality, and the metro’s newest paintball facility, Battle Park, 14805 W. Industrial Road, is open for business in Guthrie, catering to new players and the parents who accompany those players by adding a touch of refinement to the playing experience, equipment and amenities.

“There’s been a shift in the paintball industry. It’s more family-friendly,” Dustin said. “We chose our business model based on that.”

Battle Park features 18 acres of playing fields, including three different maps. The fan-favorite Town map gives players a taste of urban warfare with 16 storefronts encircling a town square. Surrounding woods give players the option to flank their opponents. The Auto map features a service garage and sales office, complete with cars and tires to hide behind. The Cemetery map boasts gravestones, statuary and a mausoleum for players to navigate. 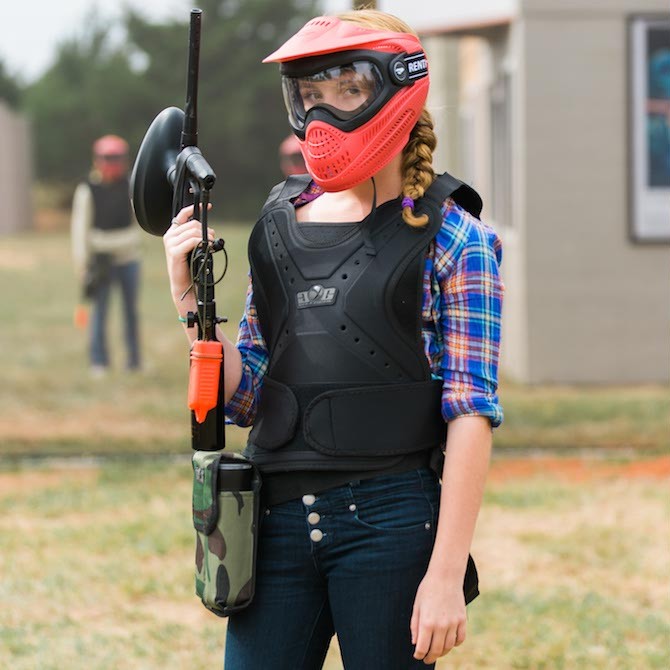 Many golfers relax in luxurious clubhouses after their round, so why not paintball players? Battle Park features a 1,500-square-foot clubhouse with a lounge and party area where parents and players can watch television, use complimentary Wi-Fi or grab a snack from the concession stand. Indoor restrooms and a gravel parking lot and drive are other touches that set Battle Park apart, Leslie said.

“Before I met my husband, I’d never played paintball,” she said. “I’ve been amazed at how much fun it is and how different it is from what I expected.”

Players can rent equipment at Battle Park, which offers three packages based on age and experience, including a low-impact setup for younger players that uses smaller, .50-caliber paintballs that fly slower and impact at one-third the velocity of standard, .68-caliber paintballs. Anti-fog thermal goggles and chest armor are also available.

“If you put a rubber band around your wrist and then pop it, that’s about what it feels like to get hit by a paintball,” Dustin Hester said. “If you’re worried about that, the low-impact is about one-third of that.”

The couple chose to locate in west Guthrie because of its close proximity to northwest Oklahoma City and Edmond, and they didn’t want to open too close to competitors in Piedmont, Choctaw and east Guthrie, Dustin said.

“We’re already seeing a bigger market share than we anticipated, so either we’re capturing more of the market or we’re growing the pie,” Dustin said.