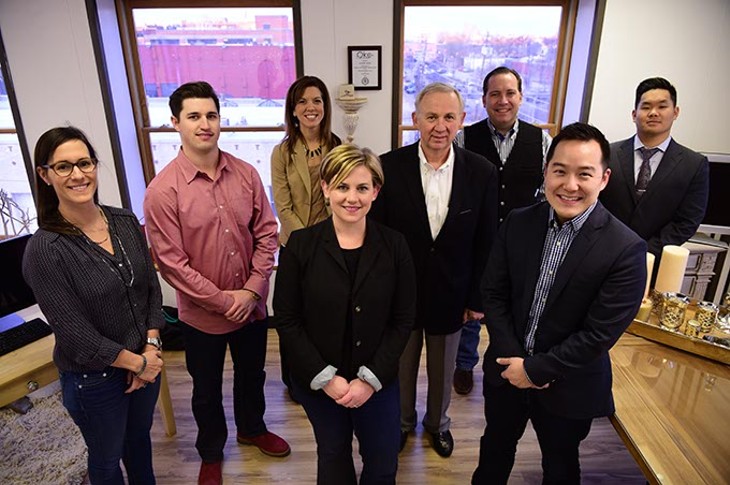 Ten Oklahoma City entrepreneurs will give away $1,000 every month to recipients who have a business, plan or project to improve Oklahoma City. Daniel Chae, owner of All About Cha in Nichols Hills, started the OKC Awesome Foundation. Chae was a “micro-trustee,” as members are called, of the Ann Arbor, Michigan, Awesome Foundation after graduating from the University of Michigan.

Chae said the only criteria for the OKC chapter are ideas that the group deems “awesome” and will benefit the community, not just the individual applying for the grant.

“The money can go to support a startup, an existing business or project or a charity like a 501(c)3,” Chae said. “It is seed money to be used for the community, even if that means the money is being used to upscale a current business.”

Like all of the micro-trustees in the metro chapter, Melissa Vincent has many years of experience working with startup businesses. Vincent is co-owner of 9Tribe, an Oklahoma City- based firm that works with technology startups or businesses that need to implement technology in their models. In addition to the money, Vincent said there are two other components that will benefit recipients.

“We don’t just see ourselves as a group that will be giving money,” Vincent said. “We intend to act as a pool of mentors for the projects we choose. Our expertise will be available to the recipients, as well as a crowd- funding platform that can get even more people involved.”

The crowd-funding platform will give recipients an even bigger pool of potential capital from investors. “The projects will automatically be added to the platform, making it possible for the whole community to get behind the idea,” Vincent said.

Michael Zserdin founded newAnthropy, the funding platform, and he, too, is a trustee. Chae has assembled a small group with networking connections that number in the thousands and expertise in technology, marketing, publishing, real estate, community development and many other fields. Chae recruited Vincent, Zserdin and others because of this expertise and because they shared a similar desire to help the community.

Another primary benefit of receiving money from the foundation is that it allows people with good ideas to skip some difficult barriers to entry that make finding funding difficult. Chae said many good ideas never get funding because two of the main routes are complex and cost-prohibitive.

“Two of the main sources of funding are charitable contributions to a 501(c)3 or other tax-deductible charity or via government grants, but that requires some ability to actually write the grants or even pay for a business plan,” he said.

While working with the homeless as part of county government in Michigan, Chae learned about the complex network of barriers firsthand.

In any complex, bureaucratic system, simple rules or standards meant to ensure order or structure can create substantial barriers to those who want to provide services and those in need of the service. It is a lesson people in social service careers learn quickly, and that same complex network of barriers applies to all kinds of charities and small businesses.

When Chae saw how the Awesome Foundation could enable trustees to subvert those barriers, or at least avoid them, he joined the Ann Arbor Awesome Foundation. The lessons he learned there are now helping create direction for the OKC chapter, including the idea that an inability to qualify for traditional funding does not mean a person’s idea is a bad one. That is another reason Chae does not want to focus on a few narrow fields; he wants to be open to many different ideas.

Mickey Clagg, another member of the group, likes Chae’s approach.

“Daniel doesn’t want the group to limit itself in terms of what it considers worthwhile,” Clagg said. “We want to consider all kinds of ideas.”

Clagg has lived in Norman since 1978, and he grew up in Lindsey, so he has the deepest Oklahoma roots of the trustees. For most of his professional career as a real estate developer, he has worked in downtown and Midtown Oklahoma City. His work with Midtown Renaissance was instrumental in the redevelopment of an area of Oklahoma City that is now thriving.

Chae invited Clagg to join OKC Awesome after meeting through mutual friends. Clagg liked the concept and saw it as a way to continue to develop the city.

“There are many ways to look at philanthropy,” Clagg said. “You can do it in large or small ways and by various means, but I think this model is the best way to bring together people with very different backgrounds to focus on amplifying the impact of the money.”

Even those awarded the grant can benefit from the group’s expertise, Clagg said.

“There will be applicants who do not get the money, but they may need mentoring or input or an idea, and we can do that for them,” he said. “A thousand dollars can be significant or not depending on the circumstances, but the expertise of the trustees, as well as the collective network, creates additional ways to help.”

The foundation will meet over lunch once a month to review applications, and each member will bring a $100 bill. Chae said the money will be private funds, not company money. OKC Awesome Foundation will meet the first week of February, and the award will be given soon after. According to Chae, they have already received more than 100 applications for February.

The Ann Arbor Awesome Foundation is part of a global network that began in Boston in 2009. The group distributes cash monthly to an applicant chosen from submissions to the foundation’s website, awesomefoundation.org. Applicants choose their location and fill out a brief application that outlines their idea. Chapters are autonomous and can focus on any criteria they choose, such as arts, business or health.

print headline: Spreading Awesome, A new foundation is giving away money to any person, group and business that they think is helping make the metro more awesome.