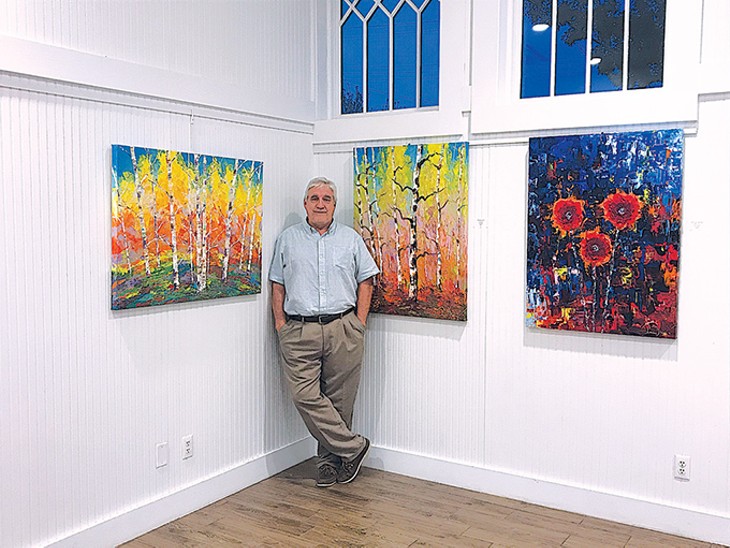 10 years later, Kenney has painted in every state and all of Oklahoma’s 77 counties, and The Depot, 200 S. Jones Ave., in Norman is hosting Tim Kenney: A Burst of Color until Sept. 1. Kenney will host a Q&A session and live painting exhibition 2 p.m. Sunday.

“People walk in and really walk into a burst of color; we’ve had that comment made several times,” said Nancy McClellan, gallery manager at The Depot. “It’s a very bright and exciting show. People love Tim Kenney’s work.”

Kenney recently unveiled a large aspen mural on the east wall of 415 W. Grey St., and the new exhibition at The Depot is his first dedicated exhibit in the gallery that promotes the work of Oklahoma artists.

“I’m going to talk about my story, and it will be fun. Hopefully we’ll have a crowd,” Kenney said of the Sunday session. “It’ll be fun painting for people that have never seen me paint live. A lot of artists don’t like people watching while they paint, but I don’t mind at all.”

Kenney said he hopes to showcase his style and share his life story, which might help other people see that it’s never too late to pursue a new field.

Kenney moved to Oklahoma from Virginia at age 14, graduated from University of Oklahoma and pursued a career in sales and marketing for 30 years across a variety of business types.

After his mother moved in with him later in her life, Kenney pivoted careers to have a more flexible work schedule. He started working as a contractor, installing drywall and doing interior and exterior wall painting.

Out of the blue one day, Kenney got a call from his nephew who owns an art gallery in Santa Fe and asked if he would be willing to transport five paintings from Santa Fe to Dallas. He wasn’t sure right away until the deal got serious.

While in route to Dallas, one painting in particular caught Kenney’s eye. It featured a giant white aspen tree, which reminded him of his time fly-fishing amongst the aspen trees of Colorado and New Mexico.

As Kenney dropped off the paintings at large homes in Dallas — the kind of homes where people can afford to spend $50,000 on art — he began to wonder if he could learn what it takes to become an artist.

With the image of the aspen tree as inspiration, he returned to Norman and began taking classes with Carol Armstrong at Firehouse Art Center. Armstrong was honored with the 2017 Governor’s Award for community service in the arts.

“Carol is the best; we are great friends,” Kenney said. “She’s a wonderful teacher and a great person. Everyone in Norman loves her.”

As Kenney continued working under Armstrong, he became attracted to the work of established artists LeRoy Neiman and Peter Max, both of whom used bright colors to highlight their work. He also said he was drawn to the impressionistic nature work of contemporary artists like Pat Matthews, Marshall Noice and Norman’s Rick Fry.

“I like certain painters that painted aspens,” Kenney said. “I met some of them, and you don’t want to steal somebody’s style. I kept asking them how to do this without painting like them. They all said, ‘Just keep painting and your style will become evident. Paint 100 paintings and your style will come out.’ I’m a lot more abstract than some of the artists that I know.”

The aspen tree has become a pivotal source of inspiration for many of his works. His textured brush strokes and abstract viewpoint bring fresh perspective to idyllic naturalist settings.

“The aspen’s white bark is a great style compared to the background of colors that I use,” Kenney said. The fact that it makes a good-looking painting is just a bonus. If it was a weeping willow tree, maybe it wouldn’t be so pretty.”

In 2014, Kenney set out on a whirlwind tour that took him to 50 states in 50 consecutive days where he painted a work in every state. The trip took a year to put together as he arranged places to crash with friends and family, all for a good cause. Kenney donates 20 percent of the sale of each painting to Parkinson’s research in honor of a family friend battling the disease. Kenney has sold 36 of the 50 paintings and has had similar success with an Oklahoma tour.

Last year, he traveled to all 77 of Oklahoma’s counties to document the state’s vast ecological differences. He has sold all but 19 of the 77, which are available at timkenneyfineart.com.

Tim Kenney: A Burst of Color