Red Rooster makes a leap from dive bar to a full-service cocktail lounge with a local and organic menu. 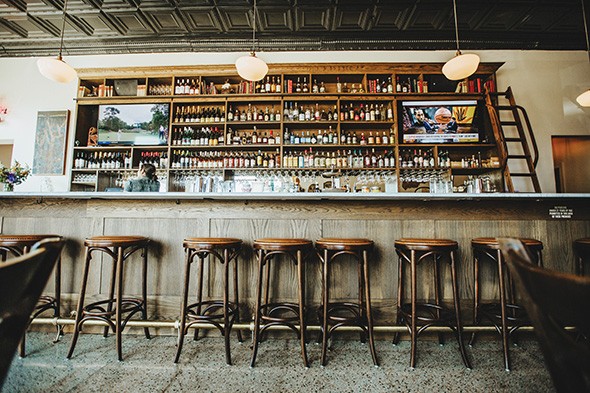 Red Rooster has existed on the corner of Walker Avenue and 30th Street since 1937, but its transformation into a full-service restaurant focused on organic and local ingredients from its previous life as a dingy dive bar is as clear as the light pouring in through its new large front windows.

Well, the glass is new, but the space for the windows was there; it was just boarded up and bricked over in the intervening decades.

Red Rooster closed late last year after serving The Paseo Arts District as a smoke-filled beer bar without a kitchen for decades. Property owner Joy Reed Belt approached Koester and Gautreaux about taking over the lease. They agreed after sitting and having a beer in the old space on the contingency that they’d be able to get a liquor license.

The building was re-zoned for liquor service, which allows the space to fulfill its historic potential. It preserved its 1930s ambiance by keeping the space’s original ceiling, floor and brick wall and other aesthetic choices like vintage mirrors and a giant wood bar — if Oklahoma’s 1930s alcohol laws allowed for liquor by the glass service.

“We did our research on what [the Red Rooster] used to be when it first opened,” Koester said. “It was a bar and grill and one point, more of a restaurant, and it was kind of an ice cream shop. … We decided to bring it back to what 1937 would be like with classic cocktails but still have the neighborhood bar feel.”

Gautreaux and his brother oversaw the renovation process, which included chipping away plaster to expose brick, except for one portion on the dining room’s back wall that keeps an original Red Rooster painting that serves as the restaurant’s unofficial mascot.

“The original plan was to remove the rooster, but [Gautreaux] kept not wanting to touch it,” Koester said. “Towards the end of the process, we came in one Sunday to take the rooster down and just couldn’t do it, so we’re left with a rooster that’s not quite centered and kind of random, but it’s all about trying to create a space that acknowledges the history but also brings in new touches.”

The cocktail list includes timeless drinks like Manhattan, mint julep, Sazerac, French 75 and negroni with a group of six martinis that includes a guide to ordering the vermouth-based drink.

“I think people would really like martinis if they knew how to order them,” Koester said. “It’s a little intimidating, so we made a guide to help educate.”

There’s also a section of the cocktail menu featuring contemporary drinks compiled by its bar staff.

All eight of its bar taps pour Oklahoma beers, and its cans and bottles are dominated by craft selections. Koester built on her experience as a wine rep to create a wine list that is affordable but also eclectic.

“I want people to have fun and try things that aren’t your normal grapes,” she said. “I want to educate and show that you can get a great bottle of wine from Greece that costs half as much as a French bottle.”

Red Rooster takes a similar approach with its menu by focusing on small plates and using less popular cuts of meat like dark meat chicken and pork shoulder and passing the savings to the customer.

Holey Rollers is a vegan bakery, but Koester herself doesn’t strictly follow the diet, preferring to focus on local and grass-fed meats. The menu is evenly split between meat and plant-based options. 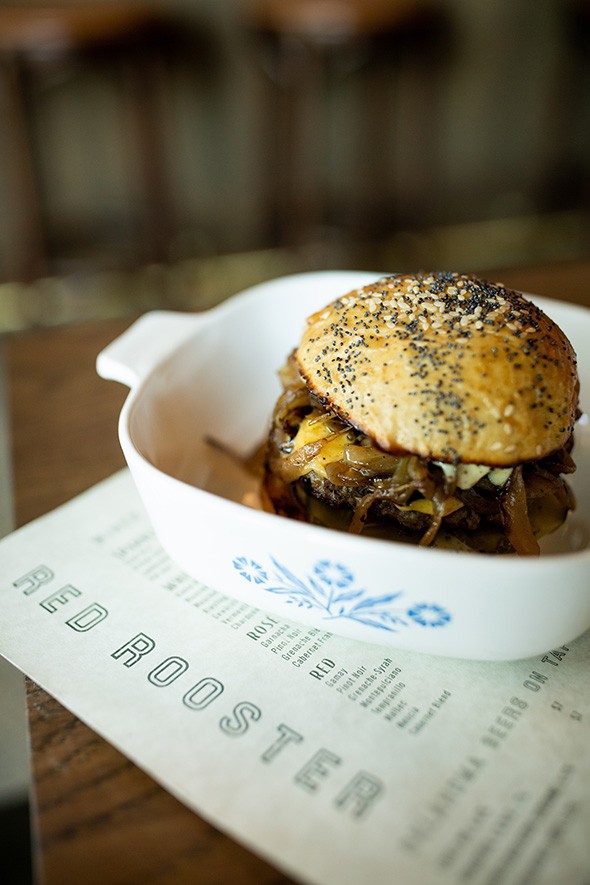 Mort builds off his charcuterie training to make a gourmet corn dog that will routinely change on the menu. The current iteration features house-smoked kielbasa with a blue masa breading ($7).

Its most popular dish is scallion “tacos” with braised gochujang pork and pickled onions ($9).

“We had it listed as scallion pancakes, but we changed it to tacos on the menu and it quickly became our top seller,” Koester said.

It offers a Rooster burger made with grass-fed beef from BF Farms in Enid prepared using the smash method, topped with an American cheddar blend, caramelized onions, housemade pickles and mustard aioli on a bun baked at Holey Rollers. On Mondays, patrons can get a burger, beer and fries for $10.

The B-MLT sandwich is the vegetarian version of the classic made by smoking Portobello and then tempura-frying it.

“You really get the smoky and crispy effect of bacon, and it’s been pretty popular,” she said.

Koester and her group have expanded from the Holey Rollers food truck to now having two restaurants within walking distance of each other in less than two years.

“I feel like I’ve been working at this for so long, trying to build a restaurant group of our own, and for it to happen so quickly, it is amazing,” she said.  “I’m pumped about it and I have such an amazing team.”