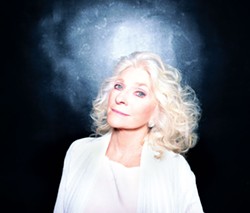 The power of social networking drew Oklahoman Bailey Perkins to New Leaders Council, a national nonprofit dedicated to developing the leadership potential of young professionals and supporting them on a path to changemaking.

The former state policy fellow at Washington, D.C.’s Center on Budget and Policy Priorities, a center-left think tank, kept hearing reference to New Leaders Council from her old co-workers. One was a fellow from the New Jersey chapter, and another was selected as a fellow in the inaugural class in Austin, Texas. The two strongly encouraged Perkins to either go through the leadership program herself or start a chapter in Oklahoma.

“It was truly mind-blowing to see powerful leaders under the age of 40 transforming public policy and making social change in their communities,” Perkins told Oklahoma Gazette when recalling her takeaways from the national conference. “You had lawyers, teachers, nonprofit leaders and people who had started their own businesses giving what they called ‘spark talks’ about how they changed their own communities. … This was perfect. We needed this in Oklahoma.”

They recruited Oklahoma leaders such as Rep. Jason Dunnington, D-Oklahoma City, and Oklahoma City Councilman John Pettis to serve as advisory board members.

“We want to build a community of people, regardless of political orientation, where we can support one another in working to do what’s best for Oklahoma,” said Hughes, who works as a general consultant on progressive political campaigns. “We are training the next generation of leaders who will be taking over this state.”

In January, 15 individuals selected for Oklahoma chapter’s inaugural class embarked on a six-month intensive learning experience called “The institution.” These individuals from across the state and representing various sectors of the economy are learning about policy issues and building skills in entrepreneurship, communications, public speaking, finance, fundraising and the use of technology and social media.

The statewide leadership group is nonpartisan and a qualified charitable organization with 501(c)(3) status.

“Our goal is to equip them with the skills to run for office, work on a campaign, start a business,” Perkins said, “and become the next generation of thought leaders.”

There is no shortage of leadership groups operating in Oklahoma. New Leaders Council Oklahoma is unlike what could be seen as traditional leadership development programs offered by local chambers of commerce, which typically engage professionals, allowing them to establish new connections while learning and thinking critically about business, policy and civic issues facing a community.

The New Leaders Council institute calls for selecting fellows based on both merit and potential, which creates an opening for younger applicants who might be in the early stages of their careers. Across the country, National Leaders Council chapters are known for building classes that are diverse in background and profession as well as representation of ethnicity and sexual orientation.

While each chapter tailors its training to the needs of the local community, all chapters seek to build a community of progressive leaders to rise to the top of their fields and ultimately improve their communities. Upon graduation, fellows join the national alumni network. Some alumni choose to run for office, seeking both local and state seats.

Perkins sees New Leaders Council as filling a void in Oklahoma, where there has been a surge in independent voter registration in recent years.

In the early stages of developing New Leaders Council Oklahoma, both Perkins and Hughes agreed to create a statewide chapter as opposed to a city chapter. The two see the Oklahoma chapter playing a crucial role in uniting progressives from the urban areas with rural Oklahoma.

“We want to bridge the rural-urban divide,” Hughes said. “In talking to folks in the city and the rural areas, you learn everyone wants the same thing, but we are not speaking the same language on how to get there.”

Of the 15 fellows, two are from outside the OKC and Tulsa metro areas. The program’s connections to rural Oklahoma will help the urban fellows establish strong connections to their state, not just their own city. The institute will move around the state, giving fellows the opportunity to see and experience all regions of Oklahoma.

Through the program, fellows complete an individual capstone project that outlines how they want to use their skills to benefit the community. Hughes explained that fellows have already begun to name their capstone project topics, which include criminal justice reform, work-life balance and women’s issues.

Additionally, fellows plan a fundraiser that benefits future classes. The program is offered at no cost to fellows, as it is supported by individual donations and grants.

New Leaders Council Oklahoma will accept applications for its second class in October. Fellows participate in the program from January through May.

Both Perkins and Hughes have high expectations for New Leaders Council Oklahoma and its role in creating a better tomorrow for Oklahoma.

“I’d like to see an Oklahoma where everyone feels like they have a role, a voice and that their state is reflective of them,” Perkins said. “Our fellows, many decided to run for office, but many of them do not. For those that don’t run for office, I want to see them in spaces of influence, whether that is through their business, a nonprofit or whatever it looks like for them.”