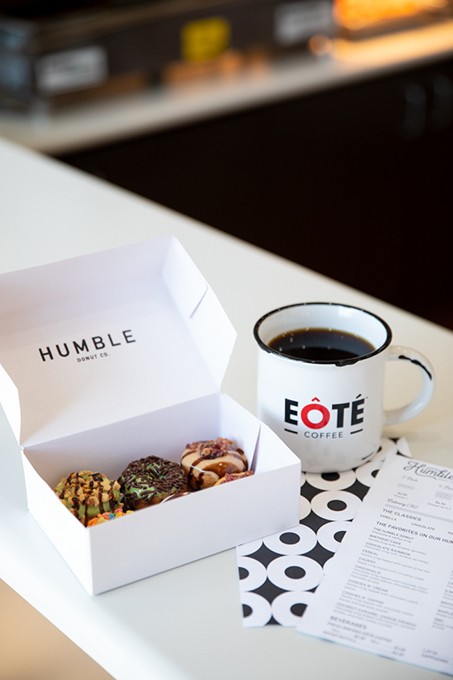 Oklahoma City-based Orange Leaf Frozen Yogurt is one of the most successful frozen yogurt chains in the country with more than 200 locations across the nation.

With the latest frozen yogurt trend in the rearview mirror, the brand is using its 5900 W. Memorial Road, Suite D location as a model for co-branding its Humble Donut Co., allowing Orange Leaf locations to diversity their offerings, use pre-existing ingredients and expand business hours.

The company was in the early stages of exploring co-branding opportunities when Kendall Ware took over as president and COO in December of last year after spending two years as its vice president of operations and training.

At the beginning of this year, Orange Leaf began in earnest to narrow down the product that best expands its reach without taking up too much space. Ware said management tried a variety of products like cookie dough and cupcakes but eventually settled on doughnuts.

Orange Leaf found a supplier for its yellow cake doughnut mix. Doughnuts are fried in-house and topped with five classic flavors (glazed, chocolate, powdered, cinnamon sugar and maple) and 15 “favorite” toppings that were created by Orange Leaf’s operations and marketing team and utilize many of the toppings available for its self-serve frozen yogurt. Ware said that they added a few toppings to round out the menu.

Sales at the Memorial location are up over 40 percent during the same period last year, Ware said.

That location began serving Humble doughnuts in June and is a co-branding test run for Orange Leaf’s franchisees. A Humble Donut location in Sarasota, Florida, recently opened, and Ware said plenty of other franchisees are interested.

“We’ve got a lot of interest coming from Missouri, Ohio, Florida, Texas. We’re trying to seal those deals,” he said, noting that franchisees have been asking for a co-branding opportunity for quite some time.

Orange Leaf works with franchisees to install new equipment and branding in stores, which means a boost in advertising after signing a new franchise agreement.

“We built a majority of [Orange Leaf locations] during the yogurt boom. There was a lot of attraction and excitement around frozen yogurt in 2010 and 2011,” Ware said, noting that many of the early locations were built in large spaces that didn’t fit the contemporary clientele needs.

The second great frozen yogurt craze began in the late 2000s with the expansion of Los Angeles-based Pinkberry, which differentiated from the TCBY-led introduction on the product in the late 1980s with a tart frozen yogurt and sleek, uncomplicated interior.

As recently as 2015, Orange Leaf was the fifth-largest frozen yogurt franchise in the country with about 8.1 percent of the market share compared to industry leader Menchie’s 14.2 percent, according to Guidant Financial.

“It’s been going very well, and despite that [frozen yogurt] craze and boom fading off a little bit, we’ve done well as a company and experienced the most in-store sales increase as a brand so far in 2018,” Ware said.

"We wanted something that could bring people back earlier in the day."
—Kendall Ware tweet this

Orange Leaf isn’t the first frozen yogurt chain to attempt to diversify in a crowded market, but it is the most dramatic overhaul and the first to extend its business hours to the morning. Dallas-based frozen yogurt chain Red Mango added juicing in 2014 while Pinkberry experimented with a cookie dessert the same year, according to Business Insider.

Orange Leaf added milkshakes and smoothies to its menu as well as announcing a partnership with Oklahoma City-based EÔTÉ Coffee, which becomes the required coffee service for any franchise expanding to Humble Donut. EÔTÉ is also offered as an optional service for franchises that are not yet adding Humble. There are several Orange Leafs across the country already selling EÔTÉ cold brew and drip coffee, Ware said.

Since the opening of Humble Donut Co., Ware said that he has been surprised by its effect on frozen yogurt and smoothies. Orange Leafs used to open at 11 a.m. but now open at 7 a.m. to accommodate the breakfast crowd. Originally, they were planning to turn on the frozen yogurt machines at 10:30 a.m., but demand dictated that everything open at 7 a.m. In fact, Ware is considering expanding the opening to 6 or 6:30 a.m.

“We’ve had plenty of people order mini doughnuts and a smoothie at the same time,” Ware said. “We have to figure out the [opening] time that makes sense. We’ve had an influx of people waiting outside for us to open at 7 a.m.”