Over the past year, Oklahoma City has garnered an impressive array of architectural saviors determined to make sure that the metro’s most classic buildings avoid dates with the wrecking ball. From the renovation of the iconic Tower Theatre and the Milk Bottle Building at NW 23rd Street and Classen Avenue, it seems Oklahoma City has entered a new era in structural preservation.

Local architect Rand Elliott has recently announced plans to completely restore and revitalize the Flatiron Building — now called the Flatiron Gateway Building — at NW Fifth Street and Harrison Avenue. The team working on the building includes developer Chuck Ainsworth, Lingo Construction and Elliott’s own Elliott + Associates. The $3.5 million renovation of the building has already started, and Elliott said it’s poised to once again become the “gateway to downtown,” thanks to its easy accessibility to the area.

Many of the most famous Flatiron buildings were erected in cities such as New York City, where the most iconic, the Flatiron in Manhattan, built in 1902, popularized the structure shaped like an old-fashioned clothes iron, and most of the buildings have been around since the mid-19th century.

The need for Flatirons in the metro was formed by the traffic patterns and trolley system in the 1920s during Oklahoma City’s early development, Elliott said. C.F. Meadors designed and developed the Flatiron Gateway Building in 1924, and it helped grow the mostly German immigrant district into a thriving area of commerce. Elliott believes that his current work on the building is a continuation of what Meadors set out to accomplish.

Managing to escape Oklahoma City’s Urban Renewal phase in the ’60s and ’70s — in which buildings were razed in the name of progress — the Flatiron Gateway has sat vacant for the past 27 years. The building’s survival is due to what Elliott refers to as changing attitudes about the classic architecture of OKC.

“Demolition is kind of a last resort these days, as opposed to first choice,” Elliott said. “[Demolition] is much more on people’s radar screen and is scrutinized much more than it was at one time, and I think that’s really positive.

With the renovation in full swing, the Flatiron will become the headquarters for PLICO, an insurance company that insures physicians. Elliott plans on the building offering around 70,000 square feet of office space on five levels, three levels of parking integrated inside the building and retail offerings to be set up on the ground level of the northeast corner.

Contemporary additions to the modernized beautification of the building include a five-story glass elevator, a south-facing outdoor deck, “postcard views” of the surrounding neighborhoods and most festively, “celebration lighting,” Elliott describes as “vertical LED lights that will change colors with the season (including the NBA season, with game days in Thunder blue).”

“What we feel like we have to opportunity to do is ... between the block where I am in the Heierding building (35 Harrison Avenue), and that particular block, there’s really an opportunity to jumpstart The Flatiron District and really take a step forward,” Elliott said. 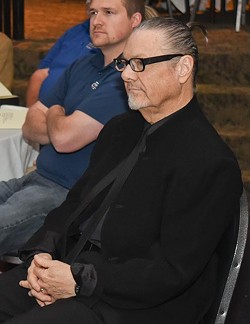 Elliott and his team are adamant that their mission is more than just renovating a building or creating new office space. They hope to bring retail shops and businesses back to the area and create a new district: The Flatiron District. They hope to bring urban revitalization to the area in the same way the Plaza District and Midtown projects have reinvigorated their respective areas of town.

Noting that the neighborhood already has Urban Johnnie and Native Roots Market, Elliott believes that it is well on its way to returning to a self- contained, self-sustaining area.

“Harding Brothers Meat Company was the neighborhood grocery and retail, and if you saw historic photographs of this neighborhood, you’d see that there were gas stations and stores and laundries,” Elliott said. “You had these small pockets, which created these neighborhoods where you’d go to the store, you’d buy fresh produce, those types of things each day as opposed to shopping for a month or something like that. What we’re seeing are these pockets returning, and I think that’s a very significant thing happening today.”

The actual district boundaries have yet to be defined, but this whole project has been one of Elliott’s dreams since moving into the Heierding building in 1995. Every morning, he would look out the window and see this boarded- up building across the street that, to him, held so much promise as a useful building and a sort of ambassador to downtown. 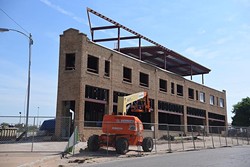 And while the total project has taken longer than he first thought it would in the ’90s, his hopes that the neighborhood around it would develop and grow over time have occurred, making now the most perfect time to move forward and for the building to take its place as the “gateway into downtown” from the east and the latest in a growing line of Oklahoma City renovation success stories.

“I think there comes a point when you just decide it’s time to do something, and if no one else is going to do it and there’s a desire — maybe no one else has the vision or they’re fearful of doing it or whatever reason — you have to mentally decide it’s time,” Elliott said. “This is all about local, organic growth, and that’s about as good as it gets.”

Editor's note: This story has been updated from its original version to correct the name of the Heierding building, it was originally listed as the Harding building in the story "Ironed out, The Flatiron Gateway Building is the latest OKC landmark to be restored," (Life, May 13, Oklahoma Gazette).

Print headline: Ironed out, The Flatiron Gateway Building is the latest OKC landmark to be restored.