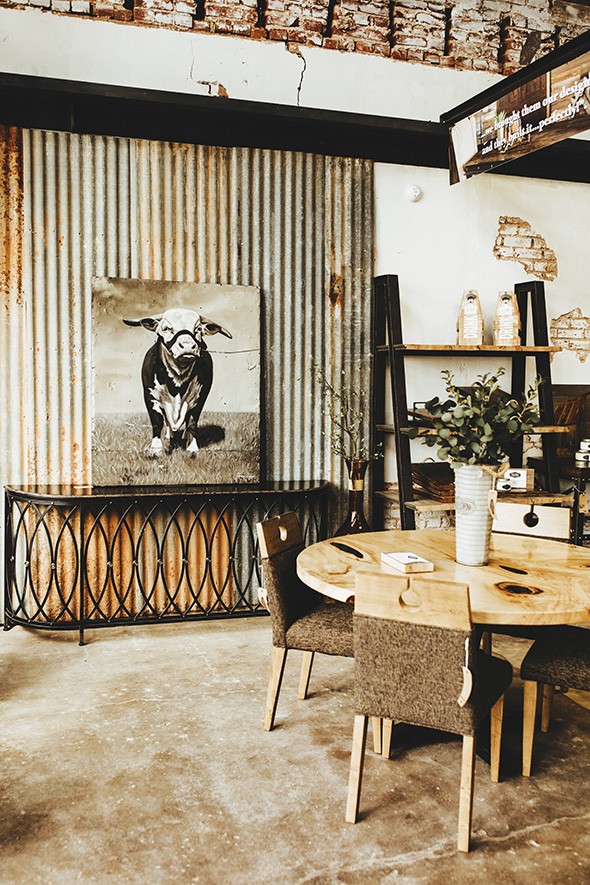 On the wall of Todd Miller’s office at Grain & Grange is a hefty bundle of race bibs and medals from numerous marathons, duathlons and triathlons, including Oklahoma City Memorial Marathon. Miller is a fan of endurance, and it shows.

He operates his furniture company, located at 1312 S. Agnew Ave., with the same spirit of durability and persistence he brings to his many races. Grain & Grange uses reclaimed wood that has lasted for generations.

Miller said he has been reclaiming and repurposing materials to make things since he was young. Professionally, he began in custom ironworks, starting a business called Old World Iron in his garage in 1997. The company makes metal pieces ranging from stair railings and gates to mailboxes and lighting fixtures.

Eventually, clients started asking if Miller made furniture, but at first he was determined to be a “real iron guy” and stick to what he knew. Then he wondered if there was something viable in making furniture too.

As someone passionate about classic designs and reclaimed materials, he decided to look for salvaged wood. Miller found Vintage Reclaimed Lumber Co., 1125 Exchange Ave., as his perfect source.

“I was looking for a very specific product called boxcar or railcar flooring,” he said. “It’s reclaimed from train cars that have been decommissioned. Some of it is 20 years old. Some of it is a hundred years old. You never really know what you’re going to get, and it’s really difficult to get.”

Miller explained his goals to the owner of Vintage Reclaimed Lumber at the time, Bob Adamson, who provided him with about $5,000 worth of boxcar flooring. Miller was officially in the furniture business, starting in 1998.

Years later, Adamson decided to sell his lumber business, and he made an offer to Miller. Although Miller initially turned him down, after some back and forth, he bought Vintage Reclaimed Lumber in April 2017.

Miller called it a great fit because Vintage Reclaimed Lumber can cooperate with Old World Iron, keeping almost all the furniture manufacturing in-house.

However, with all the recent construction around Oklahoma City Boulevard, Exchange Avenue was effectively cut off. Miller grew concerned about Vintage Reclaimed Lumber’s isolation.

That, along with a desire to create a strong furniture brand that customers would recognize more easily, led to Grain & Grange and the new showroom location in Stockyards City, which opened in January of this year.

Visitors to Cattlemen’s Steakhouse and Langston’s Western Wear often find their way inside.

Clinton Tharp, who manages the marketing for Miller’s companies, had some colorful ways to describe his very active employer.

“I like to call him the Elon Musk of interior design,” Tharp said. He added later via email, “Todd is busier than the sun.” 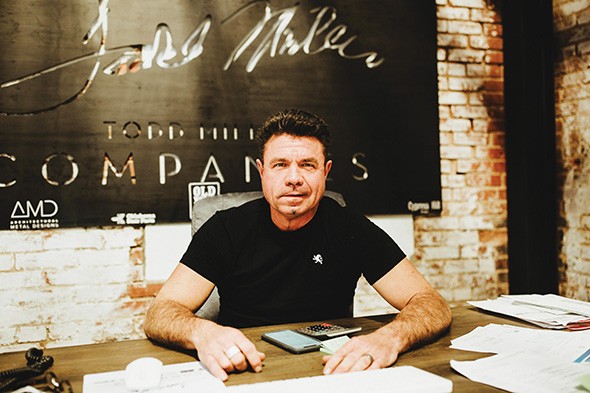 The furniture in Grain & Grange comes in a variety of styles. There are console tables with industrial metal accents and barstools with clean, sturdy lines that would fit well alongside modern décor. Rough beams repurposed as fireplace mantels have a kind of old Western sensibility.

If you visit a showroom where reclaimed wood is the building material of choice, you’re probably going to get told about how the boxcar flooring or cargo planks are pieces of classic Americana, objects that have traveled thousands of miles over generations of U.S. shipping routes.

The furniture in Grain & Grange is romantic about the wood’s history in the same way, but with the added element of Miller’s admiration for endurance.

“I got to express that in a lot of different ways in my businesses, but specifically at Old World Iron and then beautifully at Vintage Reclaimed Lumber,” he said after pointing out his racing medals. “Because it was just this culmination of all these things that I love, taking something that likely would have been discarded or has been discarded and turning it into something useful that will last a thousand years.”

Certainly, the reclaimed wood tells a story. Miller’s craftspeople have let a lot of the lumber remain rough, with gouges and knotholes that might have once been viewed as imperfections but now give every piece a unique look.

Miller’s manufacturers have kept many of the boxcar boards joined in their original tongue-and-groove construction. He said the cars had to travel long distances on sometimes uneven tracks and needed to have some flexibility.

Given the opportunity, Miller’s company will also reclaim wood from Oklahoma City. Miller walked over to a long conference table with a live wood edge called the Turnpike Table, which a customer happened to be admiring at that moment. Huge industrial legs like steamroller wheels support the piece.

The wood for that table came from an enormous felled tree in the neighborhood that the city would have otherwise turned into mulch. The design is named for the band Turnpike Troubadours.

Salvaged barn wood is another regular source of lumber and provides a third look for the furniture made in the store. Most pieces are viewable online, where shoppers can create custom orders with their choice of wood type, finish and size.

Currently, Grain & Grange is holding a drive for Oklahoma City Cleats for Kids, which provides sports gear to area children in need. As an athlete himself, community outreach is important to Miller.

Grain & Grange is planning a grand opening in mid March.