LoneMoon estimates her 2018 single “Naw Naw” has been streamed about 3 million times — as she described it, an “uncomfortable amount of attention.”

“All of a sudden last year, it went from my normal amount of views to, like, ‘Oh wow! OK. 500,000 views in a week,’” the OKC-based hip-hop artist and producer said of the song, which some “Fortnite kids,” including popular YouTuber Albino, have repurposed to soundtrack their gameplay highlight reels.

LoneMoon celebrates the release of her latest album, Andromeda, 11 p.m. Dec. 20 at The Forge, 1609 N. Blackwelder Ave. She has been releasing music since 2013, and “Naw Naw” and “Fall” have gotten millions of plays across various platforms, but LoneMoon said Andromeda feels like her first album.

“I’ve released, probably, two days’ worth of music, but also I don’t feel like I’ve put out a lot of music that I love from myself that I can come back to and listen to and not hate,” LoneMoon said. “So that’s why I would qualify this as my debut because I actually love the music. … I was able to create something that I actually enjoy.”

She released whisper_notes, a collaboration with producer Vhsceral, in January, but Andromeda is the first album LoneMoon has produced for herself since moving out of her parents’ house and her first solo album since transitioning.

“I’ve been out of the house for like a year now, and I realized, not only that, but being able to freely express myself as a trans woman was all that I needed to make things the way that I wanted to make them and also love them,” LoneMoon said. “I used to hate everything I made, and I hate that because the main thing with being an artist is you can create anything you want; there’s no rules. But there were so many rules and limitations on my life, so I had to remove those and solidify and strengthen this person that I’ve always been.”

It’s also the first album she feels like is truly in her voice after working for more than a year to adopt a higher vocal register.

“In my opinion, I sound a lot better,” LoneMoon said. “I sound like I don’t care anymore, which is my favorite. I care about my music, but I don’t care about what people think anymore, which feels great. … I changed the register because of my presentation. I wanted it to be authentic. I wanted it to be real, and I wanted it to personify me because I don’t want to put out anything if it doesn’t sound like me anymore. I’ve done that for way too long. … There’s a lot of different ways to train your voice as a trans woman, but I trained my voice musically. I would reverberate my vocal cords at a certain note that basically sounded more feminine, and then I would practice talking. Singing came later. I had to practice a lot. My album has songs on it that, when I finally put it out to distribution, I finished like three of the songs probably that last week because I still wasn’t satisfied with where my voice was. Now I’m making songs like every day.”

“When People Validate You Online”

Though “Naw Naw” — which concludes with the lyric “I should let myself be alive” — is no longer in LoneMoon’s voice, she thought of a way to use the track’s popularity to assert her identity.

“I was like, ‘How do I make everybody mad?’” LoneMoon said, “so I blurred my face and I changed the picture on the thumbnail on YouTube to the trans flag, and everybody threw a fit.”Some YouTube commenters reacted negatively, but others seem encouraged.

“In my opinion, I sound a lot better.
I sound like I don’t care anymore.”
—LoneMoon tweet this

“I showed this to my testosterone,” user BubblegumNeko wrote in the video’s pinned comment, which has more than 1,000 thumbs-up reactions. “Now it’s estrogen.”

LoneMoon said she’s proud to use the song, which was also featured in Kobalt Rad’s animated short “When People Validate You Online” — to increase transgender visibility.

“It felt good because even though it didn’t sound like me anymore, I could still make something that resonates with people,” LoneMoon said. “The main thing I regret, just in terms of transition in general, is not being educated enough and not having access to enough information about it. If I had the information sooner, I would have been so much happier so much sooner, and I feel like that’s what people need.” 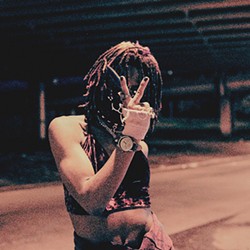 Andromeda is the sound of LoneMoon finding her voice lyrically as well.

“Before, I didn’t really have a persona,” LoneMoon said, “and now, I’m actually illustrating scenes and I’m illustrating myself in music. The main thing about hip-hop is you are this larger-than-life person. I didn’t have that before, but now … I just know how to rap about myself, and it feels good. People didn’t have that from me before, and now people have that in abundance.”

LoneMoon — who now tries to approach common hip-hop themes such as money, sex and violence from a new perspective — was initially unfamiliar with the genre and originally released instrumental electronic music.

“I was mad sheltered at my house, so I didn’t even really know what hip-hop sounded like until I was, like, 18,” LoneMoon said. “So it took me a while to actually start making it in an authentic way that wasn’t embarrassing or cringe-y.”

She was inspired to start rapping over her instrumental tracks after reading about XXL magazine’s freshman class of 2016, a group that included Denzel Curry, Lil Yachty, 21 Savage and Lil Uzi Vert.

Andromeda’s single “Ur Luv” asserts LoneMoon’s status as a “big shot” and a “big girl” with “big plans.” To LoneMoon, the album sounds like her.

“I used to get mad listening to my own music, and now I don’t; I’m happy,” LoneMoon said. “Obviously it got me got me to this point, but I wasn’t satisfied. My old recordings I put out over the span of the last four or five years, I’m cool with them, but being myself hit different.”