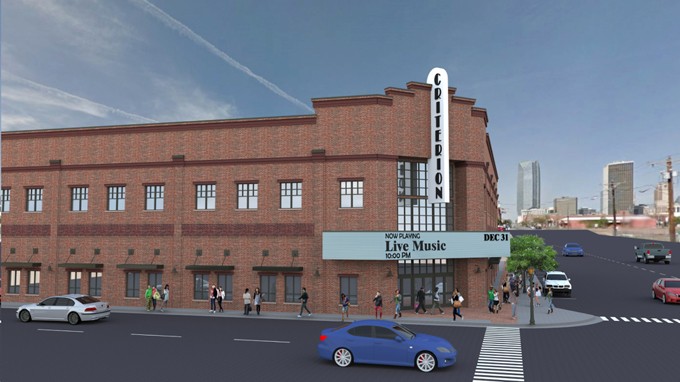 A new music venue slated to open in 2016 hopes to make Oklahoma City more attractive to large indie music acts. The Criterion, located in east Bricktown, will seat approximately 3,500 people and, depending upon seat arrangement, could hold up to 4,000.

Scott Marsh of Levelland Productions will be the general manager of The Criterion, and he said the seating is moveable on both the lower and mezzanine levels, meaning the venue can adapt for crowd size and band type.

“We can actually remove all 2,500 seats on the lower level if we have an EDM show,” Marsh said. “And if we have a smaller act, we can block off the mezzanine level, making the venue feel smaller and more intimate, as well as keeping the room full.”

Ronnye Farmer, one member of the ownership group, said an exact open date is not available yet.

“We have already had a week of delays due to weather, but we’re optimistic that we can open in January or February of 2016,” he said.

The Criterion will be one piece of the development that is occurring in east Bricktown, and Marsh said the owners are excited about their neighbors.

“The steelyards will be a multi-purpose facility that includes retail and apartments, and we will have a SpringHill Suites Hotel just east of us,” Marsh said.

The Criterion will also have dedicated parking on the west side of the building. The facility will be 39,000 square feet when completed and will include a full bar. Farmer said the bar will be managed by the ownership group, but food will be handled by an outside group, the identity of which has not been determined.

Farmer and business partner Philip Randolph own Wormy Dog Saloon, and they have a great deal of experience handling large events.

“We have the amphitheater in Eufaula, and we did more than 12,000 people for Gary Allan and Cross Canadian Ragweed,” Farmer said. “We have also managed Calf Fry for the past five years, and that’s about 35,000 people.”

Farmer said part of the group’s decision was based on being weary of dealing with issues related to outdoor shows.

“We have done concerts in the parking lot of the Wormy Dog, but with an indoor venue, you don’t have to worry about weather or noise or neighbors, all the factors that make outdoor concerts complicated,” he said.

Unlike the Wormy Dog, which focuses on Red Dirt acts, The Criterion will feature a broad range of music, from EDM to singer-songwriter, rock and country. Marsh said acts travel the corridor between Dallas and Kansas City constantly and acts that need a medium-sized venue typically choose Tulsa, thanks to Cain’s Ballroom and Brady Theater. The Criterion will be the perfect size to pull those large indie acts into Oklahoma City.