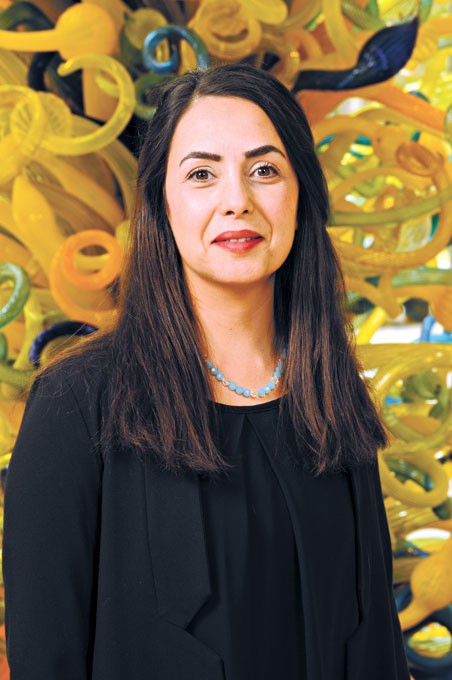 Roja Najafi was hired as a new curator at Oklahoma City Museum of Art (OKCMOA) at the beginning of September, but she is already immersing herself in work finalizing one of the museum’s coming exhibitions.

OKCMOA hired Najafi from Texas, where she worked as a curator at Strake Jesuit Art Museum, which houses a collection of about 800 objects on the campus of Strake Jesuit College Preparatory high school in Houston.

Before that, Najafi worked at Houston’s Menil Collection, a prominent collection of modern surrealism, post-war European art open to public for free.

“They have a very significantly different curatorial vision,” Najafi said. “They don’t have extended labels at all, for instance. They believe that the information available should be kept to a minimum so that the experience of the work is accentuated.”

OKCMOA, of course, did not wait long to put Najafi to work. Currently, she is working on the upcoming OKCMOA exhibition The New Art: A Milestone Collection 50 Years Later. The show, which highlights the museum’s collection of contemporary art once housed in the permanent collection of the now-defunct Washington Gallery of Modern Art (WGMA), is set to begin Feb. 17.

Oklahoma Art Center, OKCMOA’s predecessor, purchased WGMA’s 154-piece permanent collection in 1968. Najafi’s work on the exhibit includes selecting which pieces will be displayed and where as well as developing the art labels for each work.

Najafi said her work as a curator can be traced back to her interest in art history and working directly with objects.

“I value research and academic achievements through research,” she said.

Najafi has experience teaching art history in a traditional classroom setting, but she prefers facilitating the type of learning that museum self-discovery can impart.

“Creating in a space where learning can happen in it equals teaching, rather than a lecture-based system where you’re sitting there and I’m telling you what this is and how you should experience it,” she said. “Yeah, I love teaching, but not in the way that most people think of it.”

Each OKCMOA exhibit begins as a proposal made to the museum staff and is approved by its board at least a couple of years in advance; the museum planned The New Art as an exhibit well before Najafi was hired.

Exhibit proposals are typically vague on which specific works will be displayed. When organizing an exhibit from pieces in OKCMOA’s permanent collection, one of the curatorial staff’s tallest tasks involves culling a large body of work down to a manageable size.

“One of the biggest things is looking through this collection and sort of editing, saying, ‘This is what we should put out and for a certain reason,’” Anderson said.

The key to selecting works for an exhibition is to not complicate the narrative. Curators must have a good idea of what messages to communicate to the observer.

“It’s always good to find a couple of works that are central to that idea and then be flexible with the other works,” Najafi said.

After selection, curators work to develop labels for each of the displayed works. Sometimes those labels are short and sweet; sometimes they are long and detailed, depending on the work and the goal of the exhibition.

Najafi is also working to design the layout for the WGMA exhibit. The average museum visitor probably does not consider why something is placed where it is, but the museum considers this in great detail.

“I personally like to give more choices rather than a narrow tunnel that you enter and exit,” she said. “I would like the visitor to come up upon these accidental moments on their own.”

“There is value in a sense of liberty,” she said. “I’m not saying it’s just randomly put up — even if it feels randomly put up, there is a control to it and a value in that control. Sometimes accidental discovery stays with people much more than a planned structure.”

Learning isn’t just for museum guests either. Because OKCMOA is so diverse in its offerings, Anderson said curators are often assigned to exhibits outside their areas of expertise. That variety, he said, makes the job challenging and even more exciting.

“We’re still in an environment where we’re very much learning,” he said.

Najafi said objects and works of art can be among the most useful teaching tools.

“This is another dimension that you would never get by reading a book or an article — by looking at the work closely and by handling the work and objects in a collection,” she said.

The best teachers, Najafi said, are not the ones that cram the most facts into their students’ heads, but the ones who put them in an environment most conducive to enthusiastic learning.

Learning is something everyone does all the time. Najafi likes that her job is an extension of that.

“Every day, we learn something new,” she said. “It might be minimal, it might be something that is not significant to us today, but we learn by reading the news, by reading gossip, by looking and thinking and feeling the wind.”

Najafi said she hopes people do not just leave OKCMOA having learned something, but with an appetite to learn more and a drive to seek out those opportunities.

“That’s the type of teaching that has the impact we expect education to have,” she said. “Our museum not only values this, but also does this in a very sensitive way. If you are interested in the information you can get it, but it’s not shoved into your face. If you’re happy to just look and walk through or just listen or just sit, that’s a great part of this.”