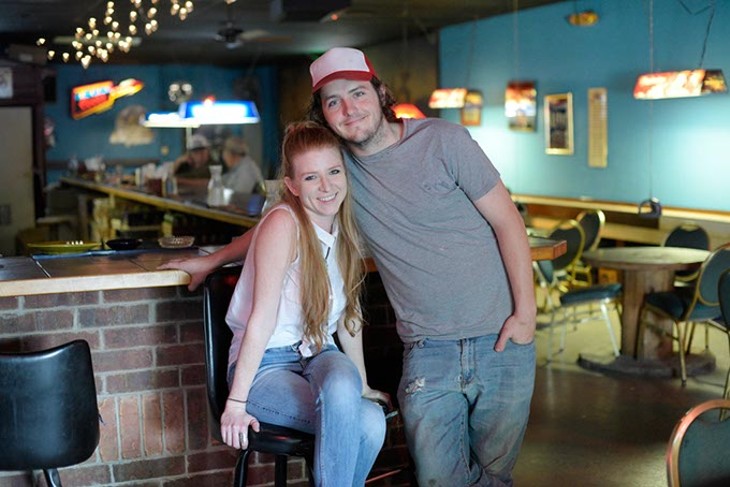 When the owner of Norman’s Blue Bonnet Bar, 321 E. Main St., announced that he was selling the business, Michelle Simer’s boyfriend Tanner Miller told her they should buy it. Simer had been working at Blue Bonnet since returning to Norman from living in Spain.

“I needed a part-time job, and I was a regular up there and I knew the owner,” Simer said.

The change from working in to owning a bar was a big one.

“It was kind of a culture shock,” Simer said.

Blue Bonnet Bar opened in the 1930s, according to former owner Ken Green, who purchased it in 2002. It was long a cash-only beer bar, but that changed when Simer and Miller took over.

“Day one, we got a credit card machine and Internet,” she said. “We brought the bar into the 21st century.”

The process of getting a liquor license for Blue Bonnet took a few months.

The other major change new owners instituted might be the most influential — they brought in live music six nights a week.

The bar was known as a neighborhood haunt for the older set, and Simer and Miller said they wanted to make sure it was still their place.

“The older veterans — some are actual veterans — come in as soon as we open and hang out, playing dominos all day,” she said. “They’re gone about 5 p.m., but they’re there when the doors open.”

After 5 p.m., it’s a different story. She said the addition of liquor and live entertainment draw in a younger crowd.

“At night, the culture has completely changed,” she said. “We get a younger crowd, a lot of young professionals; not so much college students.”

The owners want Blue Bonnet a place where anyone feels comfortable.

Miller is a musician, and Simer started booking bands when she came back to the U.S. a couple years ago, so they knew live music could be a big draw.

On Mondays, the venue hosts an open-mic night for musicians. Simer said the response has been phenomenal.

“I knew Norman had a lot of musicians, but I had no idea how many,” she said. “There are a lot of talented people who aren’t ready to do it full-time. It’s so cool to have so many people here to play local music early in the week and come out and support it the rest of the week.”

Well, almost anything; the one rule for music at Blue Bonnet is acts have to be local.

“That’s my thing,” Simer said. “Booking local acts means keeping it personal. I know that person. I see that person. I’ve had conversations with them.”

Having artists who live in Norman or elsewhere in the state makes the music more relatable and resonates with guests. That’s what keeps crowds coming in.

Despite serving liquor and hosting live music, Simer said the bar hasn’t really changed that much.

“Ken still comes in; he’s our best customer,” she said. “It took him a few months of transition from being the boss to just giving us good advice.”

Even before they purchased it, before they worked there, Simer and Miller hung out with Green, who they view as a father figure. And like any parent, sometimes his advice is wrong.

Green said the bar shouldn’t serve liquor and that it would bring in a rough crowd. If anything, Simer said, the opposite is true. A new coat of paint on the walls and the ability to accept credit cards has people giving the bar a second look.

“Every art walk, people come in and they say, ‘Oh, it’s completely different,’” she said. “The median age has gone down by about 50 years. It’s beneficial for the Bonnet to have people give it another chance.”

She looks forward to events like Norman Music Festival that expose new crowds to the old bar. The younger crowd at night isn’t as exclusive as the old guard there during the day.

“We still have the same shuffleboard and the pool table,” Simer said. “Nothing superficial has changed; it just has a different vibe. That’s what we keep hearing, and we take it as a compliment.”

The bar’s oldest patron is 87 and still comes in daily. Too much change might be a shock after all these years.

“He’s been coming here since he was 14,” Simer said. “I didn’t want to take away [the older patrons’] living room; they’ve been going here the longest. We don’t want to make them uncomfortable.”

Now, though, they’re making sure Blue Bonnet Bar welcomes the next generation of Normanites for years to come.