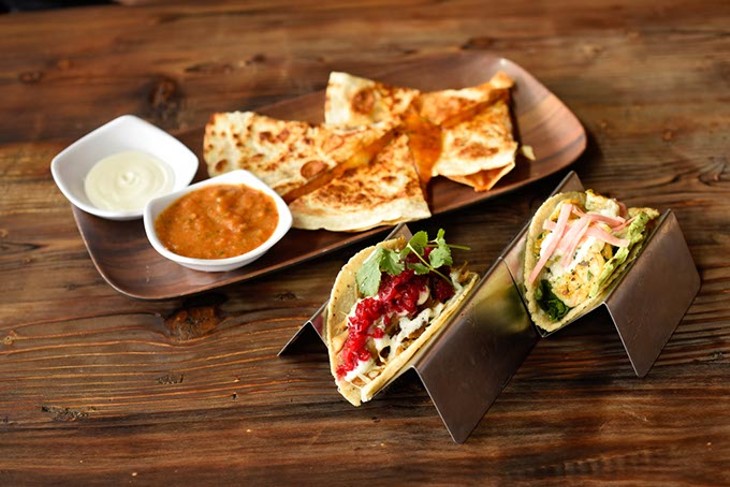 There is a push-pull dynamic in every restaurant. The meeting of art and commerce, of intent versus expectation, is a tough line to walk. And at new Automobile Alley hot spot Cultivar Mexican Kitchen, 714 N. Broadway Ave., it’s a tension best illustrated by queso.

“Seventy percent of our produce is organic,” president Gary Goldman said. “Our chicken is 100 percent GMO-free, free-range, pasture-raised chicken. We’re not out to portray ourselves as something we aren’t.”

The “farm-to-fire” restaurant strives to give customers clean, healthy, delicious food. But when customers during the soft opening brought up issues with the queso, Goldman responded. Top Chef season 13 winner Jeremy Ford, a student of head chef Dean Max, was visiting the kitchen when he heard there was a problem with the queso and decided to fix it himself.

“We didn’t go to Velveeta,” Goldman said. “But we are using a white cheddar now that gives it the right texture.”

As much as people want to eat real, fresh food that doesn’t come boxed or canned or pre-made, it still has to taste great.

It’s a philosophy that has staff grinding corn for a homemade masa that creates fresh tortillas unlike any that can be found in stores. Having that base for the tacos is important, Goldman said.

“It doesn’t matter what you put on your sushi if you can’t get past the rice,” he said. “That’s how important great tortillas are to our tacos.”

Goldman said the response from the staff when they smelled the masa was almost emotional. There’s nothing like the smell of fresh-ground Oaxacan corn, and it’s a rarity outside of home kitchens because it’s so labor- and ingredient-intensive.

But Goldman said all that work is worth it when customers take a bite.

Cultivar developed over the last two years, but its origins go back to Goldman’s first job after graduating from Oklahoma State University. Working at Marriott Harbor Beach Resort & Spa in Fort Lauderdale, he met Max and found a friend, mentor and business partner.

“I was a young chump,” he said. “I just happened to land with one of the best culinary minds in the country.”

Max founded DJM Restaurants, a culinary consulting company with restaurants across the U.S. and in the Bahamas, with a focus on farm-to-table food.

Goldman, who in the intervening years worked with the Hal Smith Restaurant Group at Chesapeake, reached out to Max when he was ready to open his own concept. Their collaboration is Cultivar.

“I grew up eating meat and potatoes. Dean educated me on clean eating,” he said. “That’s what we’re doing. We’re as GMO-free, as organic and as sustainable as we can be.”

In addition to some mainstays, including lamb, chicken and veggie tacos, Cultivar has seasonal varieties that will change every few months.

The starting menu has duck confit, scallops and oxtail tacos that are sure to be mourned once they’re gone, but Goldman said Max’s talent for flavors ensures they’ll be replaced with something everyone will love.

Loving Cultivar isn’t hard. Despite an ordering system that might take a visit or two to fully figure out, it’s a bright, warm space with high ceilings and tons of natural light. Part of the credit for that goes to designer and architect Larry Pickering, who worked with Goldman to make their shared vision a reality.

“The response has been tremendous,” Pickering said. “It’s a great mix of dining environments: indoor, outdoor, bar, private, communal. There are a lot of moving parts, but it’s working well.”

One feature Goldman insisted on was the full bar. People can come in, grab a meal and go, but to create a truly livable space where people feel comfortable whiling away an afternoon, they needed a conducive environment.

The concept might be fast casual, Goldman said, but he still wanted a place where people would want to spend their time. As Oklahoma City moves into spring and summer, the doors on the front of the restaurant will be open more, giving patrons a beautiful view of bustling Broadway Avenue while they enjoy plates of tacos and fresh margaritas.

“This is a miraculous time in Oklahoma,” he said. “The city has been really appreciative. We’ve heard a lot of thank-yous from customers, and it’s humbling to hear. It’s the right time and the right conditions for us.”

And with the right cheese in the queso, it might be the right time for Cultivar for a long time to come.