The first thing you notice is the skin. The fryer transforms the skin on each chicken wing into a tiny work of art as a network of bubbles and air pockets stretch taut around the lush, fatty meat.

These are Korean-style hot wings, and the minds behind the new Uptown 23rd Street concept Chick N Beer think Oklahoma City is going to love them.

Guernsey Park executive chef Paul Langer said he was inspired by the number of Korean-style fried chicken restaurants in metro areas like Dallas and Washington, D.C. It made him wonder, “Why not in Oklahoma City?”

The technique fascinates him, and the use of a lighter batter showcases the chicken’s skin — the most flavorful part of the bird — rather than hiding it. The frying oil creates a skin that puffs up before becoming crispy, almost like a very thin pork rind.

Though the cooking style of the chicken wings is Korean, Langer said, the flavors will come from all across Asia.

The primary sauce will use gochujang, a blend of fermented red chilies and soybeans that imparts a bright, slightly sweet and salty heat to the wings.

All the sauces will be made in-house, so they’ll be flavors customers won’t find anywhere else.

On the side, diners will find lots of fresh pickles and kimchi.

“The kimchi, we’re trying to keep it more subtle,” he said. “Kimchi, you can control the funk of it. We’re going to let ours ferment for seven days. It’ll have a hint of something, but it won’t be crazy, and it will have a crisp texture.”

That sour tang is an important counterbalance to the decadence of the main course, and it’s already pretty common in American fried chicken. Even Eischen’s Bar in Okarche likes to put out a spread of hot sauce, pickles and onions to go with its bird baskets. 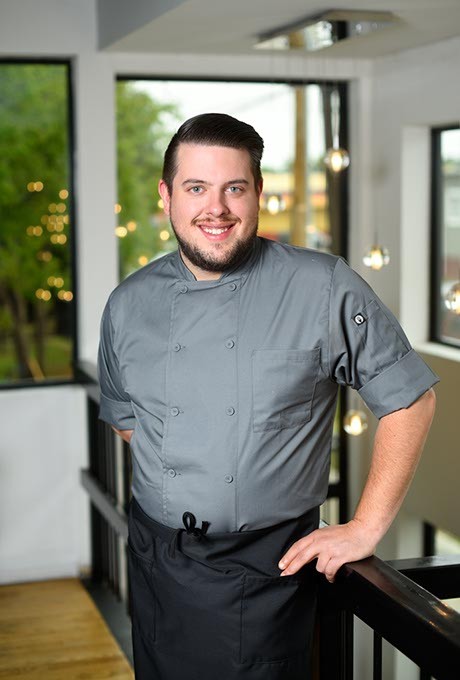 “Quite a few Asian cuisines have that sense of balance, the yin and the yang,” Langer said. “Eating something rich and fatty goes with something pickled, sour, bitter — finding a balance between all the flavors.”

His pickles will include a lot of daikon radishes, pickled cabbage (which is different from kimchi, which is fermented) and spicy cucumbers.

But the pickles and kimchi are also great palate cleansers, he said, and they go great with beer.

Drinking is a big part of Korean culture, which can be fairly repressed. As much of South Korea retains the ideals of Confucianism, it’s a society in which the social hierarchy still rules and there are a lot of taboos about disrespecting your “betters.”

Etiquette remains important at night, when the alcohol comes out, but the culture of respect encourages lots of pouring drinks, which tends to lead to a lot of drinking.

Langer said the pairing of Korean-style hot wings and beer is a natural one from a flavor perspective, but it’s also an homage to Korean culture. Taking over the old Bubba’s Bub-Ba-Q building, 715 NW 23rd St., Chick N Beer’s close proximity to neighborhoods could make the restaurant a haven for locals who want to have drinks with dinner without worrying about driving home.

“This area is a great mix of residential and commercial,” he said. “How many of us have been at home, but we don’t want to cook, don’t want to drive to Wingstop. With Mesta Park, Edgemere and Jefferson, I think it’ll work out really well.”

With a prominent spot on 23rd Street and a large area for a patio, Langer believes it promises to be a great place to hang out and people-watch. Cook times for wings are five minutes, so it can be a quick place to stop for lunch as well.

When it opens, the bar will focus on local beers, but Langer said he’d like to host some beer preview dinners to work on pairings. At some point, he’s interested in having a beer brewed just for the restaurant.

The menu for the restaurant is about half done, but Langer’s already perfecting his fried chicken recipe, and that’s really the main draw.

“We’re not going to do a bunch of ‘Who can eat the spiciest wings?’ contests or any of that stuff,” he said.

While some eateries broaden their menus to be everything to everyone, Chick N Beer has a clear mission.

“We’re doing a singular focus, and we’re doing it really well,” he said. “We don’t need to be a place where you can come for anything you want with 150 menu items. It’ll be good chicken and good beer.”

That is more than good enough.

Chick N Beer is slated to open this summer.