Oklahoma Medical Marijuana Authority released its latest set of rules for the cannabis industry on Nov. 1. 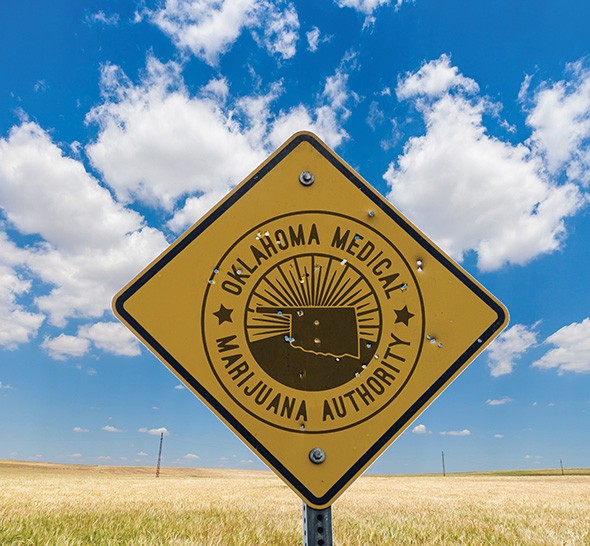 “Legislators can’t legislate every bit of minutiae in the way some of these things run,” J. Kyle Davis with Overman Legal Group and Climb Collective said. “That’s why you have the administrative law framework, where the Legislature will grant some rulemaking authority to agencies that have the appropriate personnel to have better insight than your average lawmaker, so the Legislature puts the health department in charge of some of this.”

OMMA puts these rules in place without input from outside sources and the authority to make emergency rules as well.

“In the [Oklahoma] Administrative Code, there is such a thing as an emergency rule, which we saw earlier in the rollout of the medical cannabis industry, which has a different set of rules. The public sometimes is not entitled necessarily to hearings or a chance to comment when certain conditions are met,” Davis said.

While these rules could be challenged, a threshold would have to be met by a petitioner filing a lawsuit against OMMA.

“Most of the time with administrative law, you’d have to find that an agency acted in a manner that was arbitrary or capricious, where they basically ignored data, made rulemaking that was just totally arbitrary and there was no common sense behind it. … The blank spaces in the law are where these agencies are specifically granted authority to fill in the gaps,” he said.

Provisions for research and educational facilities were parts of State Question 788 that had yet to be outlined until now.

Licenses for research and educational facilities are good for one year and are valid for only a single location. Additional locations will require the acquisition of multiple licenses, and these licenses can neither be transferred from one person to another, nor can they be converted to another license type, according to the rules.

“The blank spaces in the law are where
these agencies are specifically granted
authority to fill in the gaps.”
—J. Kyle Davis tweet this

Sections governing waste facilities licenses have also been updated from their framework in Senate Bill 882. While the application process is now open and the license fee is set the same as other cannabis businesses, the selection of companies for those licenses is still ongoing, though the number of available licenses is limited to 10. Those chosen will have to also be permitted by the Oklahoma Department of Environmental Quality, and Davis said there are required insurance limits for those licenses.

“That’s the only one that has a limited number of licenses, so you see in other states when they do that, then the application process becomes much more expensive,” he said. “You’re competing against other potential licensees. They’re not granting it to everybody that qualifies, so people are really unsure. I don’t know that these rules really clarify much because it doesn’t really speak to how the licenses will be issued.”

The other subsection that has substantive changes is the one governing testing requirements and facilities.

A “surveillance laboratory” is in the works that will audit existing laboratories three times a year by asking for samples and the laboratory results from those samples. The provision prohibiting ownership in other cannabis businesses that will have samples tested by the labs has been retained wholesale from legislation, but other sections pertaining to laboratory operations are new, including technical requirements for equipment, cleaning, records and how long those records must be retained.

Already in place are rules governing acceptable thresholds of bacteria or fungus of samples, including less than one colony-forming unit of E. coli, salmonella or staphylococcus aureus. Samples shall also be tested for yeast, mold, mycotoxins (including aflatoxins and ochratoxin A). Additionally, they shall be tested for residual levels of solvents and chemical residue including but not limited to acetone, benzene, butanes/heptanes, hexane, isopropyl alcohol, pentane, propane, toluene and total xylenes. They must also contain less than half a percent per parts per million of pesticide residues and be tested for lead, arsenic, cadmium and mercury.

“All these requirements mirror legislation in terms of maximum parts per million. They’ve added kind of an obvious one to the contaminants and filth section that disallows product with evidence of bugs and animals or similar uncleanliness,” Davis said.

For those not operating the laboratories, the most notable change in that section is the batch requirements for cannabis testing.

“We knew previously that a batch size was 10 pounds, but now it’s laid out that the samples you have to provide to a testing laboratory have to be a half-percentage of the batch size that you submit,” Davis said. “And you have to submit two, so basically 1 percent of each batch you turn in has to be submitted for testing. And it says a reserve of samples should be stored by the department for 90 days.”

That means that if 10 pounds is submitted for a testing batch, the laboratory will require 45 grams for testing, which is more than one and a half ounces of cannabis flower or cannabis concentrate.