Medical marijuana is now legal in Oklahoma, and a handful of dispensaries are already offering smokeable product. 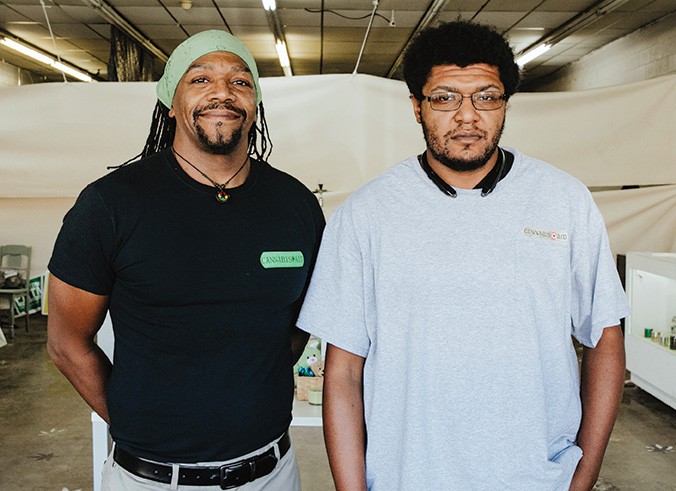 By Friday afternoon, word has gotten around and business at Cannabis Aid is booming.

Customers are hit with the rich scent of fresh marijuana as they walk through the doors. While signing in, they crane their necks to see the contents of the glass jars like they’re attempting to get a rare glimpse at an exotic species.

At the counter, a daughter offers her mother advice on what strains she thinks she’d like most. A young customer decides to take home a little of everything offered. A man with a gray ponytail wearing overalls and using a walker asks if he can buy three ounces. He drove from rural Stephens County, and it’s a long trip.

The clientele are a mixed bag, but they’re all there for the same reason. It’s Oct. 26, and medical marijuana is now legal in Oklahoma.

Thanks to a donation of a small batch of crop from a grower in the southeast part of the state, Cannabis Aid was able to offer customers a taste of what is to come.

“Quantity was not really the issue; we just wanted to make sure there was something there for the patients to get ahold of,” Mothershed Bey said.

Fresh flowers fly off the shelves as fast as they can be brought from a secure area in the back. The phone rings off the hook all afternoon. And the trash talk has already begun online.

“We are sooners and we move in a sooner spirit, and everyone hates the sooners because we’re consistently persistent,” Mothershed Bey said.

That outlaw spirit is inherent in Oklahoma’s medical cannabis industry as it launches due to wording of the law.

“Under Oklahoma statute right now, everything has to be produced in-state. But it’s kind of a chicken-and-egg scenario, where if you’re producing in-state, where do you get your supply?” Hill said. “Even the OMMA [Oklahoma Medical Marijuana Authority] representatives have stated openly that it’s almost like a don’t ask, don’t tell policy right now. It’s impossible to have Oklahoma native seeds unless you’re going and finding a supposedly random plant in a field somewhere.”

A tweet from OMMA on Sept. 5 states in part, “Medical marijuana license holders must determine on their own how to obtain seeds at this point.”

The federal government also still classifies cannabis as a Schedule 1 substance, and there were concerns about state and local law enforcement actions.

That hiccup has turned out to be the supply chain-depleting opening weekend. By closing Saturday, they were completely out of flowers to sell.

Cannabis Aid, following the medical spirit of the law and to protect their proprietary information, does not advertise its prices or what strains it has available.

But word through the grapevine and online shows that prices opening week in Oklahoma reached up to $35 a gram, well above the black-market value. Hill and Mothershed Bey both expect those prices to drop and stabilize in coming weeks and months. But profit is not the sole motive behind their business model.

In 2010, Mothershed Bey founded Made Aware Now (M.A.N.) 101 program, a mentorship program that aims to help young men better themselves or escape criminal pasts. M.A.N. 101 has always been and still remains privately funded.

“A part of our business model takes what we’re doing at Cannabis Aid to help support M.A.N. 101 so it can grow,” Hill said.

Part of their activism will also be to push for the full decriminalization of cannabis.

Mothershed Bey and Hill both acknowledge that building a business in uncharted territory might also accidentally put them outside the law, even if they have studied it carefully and intend to follow the letter of it.

Mark Woodward, spokesman for Oklahoma Bureau of Narcotics and Dangerous Drugs Control, said there are some fast-growing strains that can be harvested in 45 days.

“It’s like the marijuana land run,” he said. “It’s possible that some stores already have product ready to go. Now how they got the seeds, I can’t answer, but are they within the window of theoretically having some product to sell? Yes. We’re looking to go after the bad actors who intentionally are out there operating without a license. We’re not going to go after somebody and shut their store down and file charges on somebody who simply misunderstood the law.”

OBN will do initial inspections of cannabis businesses to make sure they’re following safety guidelines for the distribution of a controlled substance, much like they do for pharmacies to protect them from burglaries and internal theft.

The bureau will also investigate formal complaints about dispensaries. As of Oct. 31, they had received none.

“We’ll take a look if we get a complaint, but it could just simply be a misunderstanding because there is so much confusion,” Woodward said. “You’re going to have a lot of that, so there really are so many unanswered questions that it’s hard to really fault these stores and prove that they intentionally went outside the lines to get a jump on the competition. We’re going to stay in our lane. If they’re doing everything right and staying in their lane, they’ll probably, outside of that initial inspection, never see an OBN agent need to step on their property,” he said.

Both Mothershed Bey and Hill are just happy to be in business, providing their customers with quality medication that they hope can help them avoid dangerous and often addictive pharmaceuticals.

“We’re a small mom-and-pop shop that’s still on the come-up and we’ve still got dust, so pardon our dust, but we’re here to help you,” Hill said.