After months of conference room meetings, policy discussions and the other administrative duties of a school superintendent, Robert Neu got his first real chance to interact with students, teachers and parents in a school setting.

On the first day of class Monday as more than 43,000 students returned to school across the Oklahoma City Public School system, the district’s new superintendent hopped on a school bus and ate breakfast with third graders at Mark Twain Elementary in west OKC.

“They are the most important,” Neu said about his trips into school buildings. “I hope to do a lot of these throughout the school year.”

At the corner of 2nd and Kelin, with the dawn sun slowly rising over the city’s skyline, a few students began to make their way to the bus stop. Waiting for them was Neu.

“I really want to get a feel for what’s going on in the schools,” Neu said before he boarded the yellow school bus.

At Mark Twain, before Neu’s bus arrived, principal Sandy Phillips was greeting parents and students as they came in through the south entrance.

“Its got my heart,” Phillips said about the school she has been principal of for eight years. “The families are wonderful, the kids are wonderful, and they just need a break in life.”

Mark Twain serves just under 300 students, 70 percent of which are Hispanic. Like many OKC schools, Mark Twain serves lower income families and nearly every student qualifies for free or reduced lunch. 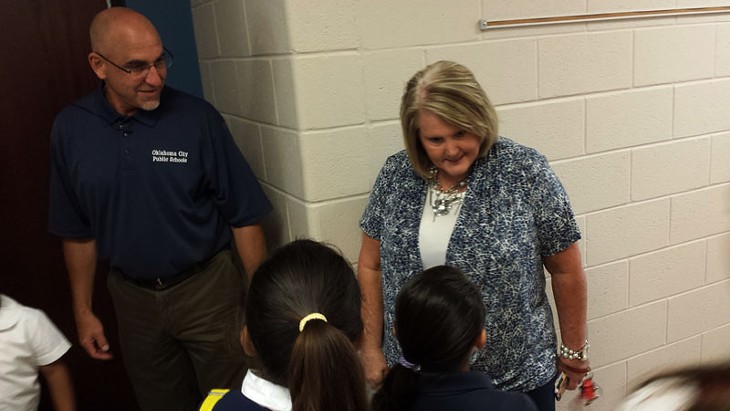 Anticipating the arrival of Neu, Phillips said she was eager to show off her school and hoped the passion her staff had for teaching was evident.

Back at the bus stop, Cora Reed watched her son, Kevin, board the bus with Neu. She was impressed with the superintendent’s visit and hoped that kind of interaction continues.

“I hope he does stay more involved with the kids, I hope it doesn’t stop,” Reed said.

Reed also said she had noticed the statements of Neu in the media and was particularly pleased with his desire to attract more teachers to the district.

“We need to get [teachers] better pay, we need much better pay [for our teachers],” Reed said. “We have a pretty good school. Hopefully he stays involved and he gets more teachers to come.”

Back at Mark Twain, Neu had stepped off the bus and was escorted to the school’s new gym. He interacted with arriving students before joining a third-grade class for breakfast, most of which said they had come to school without anything to eat that morning.

“It’s actually good,” Neu said has he enjoyed a plum and breakfast pastry.

Neu said his school visit was a chance to show he cared, but also an opportunity to learn more about the district he took over just a few months ago.

Neu said he has already learned the OKC district is filled with potential and has a community he believes is ready to help the school system move forward.

“I think the expectations are high,” Neu said. “But no expectations in the community are higher than the ones I put on myself.”