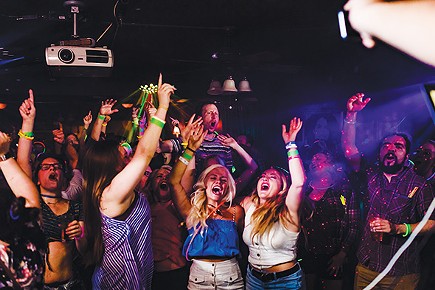 DJ Ryan Drake uses “the 1990s” as shorthand to promote his monthly parties, including this month’s New Year’s Eve Dance Party, at 51st Street Speakeasy, 1114 NW 51st St. But if you ask him about it, he thinks the decade from 1995-2005 was actually what influences music today.

“There was something special about that era, as far as everything is concerned,” he said. “I don’t think it’s just that we grew up then is what is special about it. I think it actually was a little different.”

Drake said he considers 1995-2005 to be “its own decade” that showcased hip-hop as a dominant force and brought in some acts that still top the charts.

“The big rise of pop and hip-hop that we are now experiencing ... that kind of started back then,” he said. “It was the beginning of Justin Timberlake and Beyoncé, and those are two of the most iconic musical people that we have, and they started in the late ’90s.”

Drake said he believes the somewhat-democratic process of MTV’s Total Request Live (TRL) and young listeners’ access to cable TV started shifting power out of decision-makers’ hands and into the people’s, a trend that has only continued with the growth of the internet.

However, all of that is a little complex for a flyer.

“I’ve learned that if you put the word ’90s on the flyer and on the event description, people come out in droves,” he said. “Way more than if you just wrote like, a nostalgia party.”

Drake said if he can lure people in with the allure of the 1990s, he’s confident his song selection will keep the crowd dancing.

“I put ‘’90s/2000s,’ which basically gives me free rein to play anything I want from the last 30 years,” Drake said. “People see that very specific thing, and they think they know what they’re getting into, and I know that once I get them there, I can get them to stay there.”

Even if you don’t want to get your 1990s groove on, the Speakeasy offers other amenities for the holiday evening, including the Thunder game on the big-screen, free parking and coat checks, a look back at 2018’s best music videos from 9-10:30 p.m. and a champagne toast at midnight. The dance party is 10:30 p.m.-2 a.m.

Drake encouraged people to come early, as last year the Speakeasy was at capacity for much of the evening.

He has taken over the logistics for the monthly dance parties, working in close conjunction with his friends at the Speakeasy.

“I kind of made it my own thing, and we tried to make it as much of a music festival vibe as possible,” he said.

Over the past three years, Drake said he has learned about marketing the Speakeasy events and drawing a crowd. He doesn’t think people show up to hear his technical prowess as a DJ but said he is “really good at throwing parties.”

One of the key elements is to keep the music and the people moving.

“There are X number of iconic songs that you have to play every month.  There’s like 30 songs — and I don’t play full songs, that’s the thing, which one person has greatly complained about. I try to make it as much of a party, kind of like a Girl Talk vibe if possible,” Drake said, referencing the mashup specialist DJ also known as Gregg Gillis. “[There are a] ton of glowsticks and balloons and people dancing on stage, and we don’t stay in a song for more than like 90 seconds before we move on to the next song.”

Since it’s New Year’s Eve, Drake will be prepared with extra glowsticks — nearly 1,000.

Drake said there are 30-40 songs that are a regular part of the rotation, but he also works in some surprises. Still, if you show up, you’ll probably hear Britney Spears, *NSync, Backstreet Boys and Ginuwine.

“It’s big hooks and sing-alongs and the songs people know … like ‘Hit Me Baby One More Time,’ or ‘Bye Bye Bye’ or ‘I Want It That Way,’ or ‘Pony,’” Drake said. “So songs like that you’re going to hear every month, and then the rest I kind of fill in with stuff you don’t hear every month so it’s just not the same three-hour playlist every month.”

While he uses 1990s nostalgia as a selling point, Drake emphasizes the fun to be had at the Speakeasy as well.

“I know just getting people there is the problem; once they’re there, I’m confident I can make them have a good time and get them to stay there,” he said. “But getting them there is like the thing. And writing the word ’90s, I noticed, has really … [when] I changed it to Speakeasy 90s-00s Dance Party, that’s when it really took off. ...  As long as I give them those songs, as long as my music selection’s good, then they’re going to stick around.”