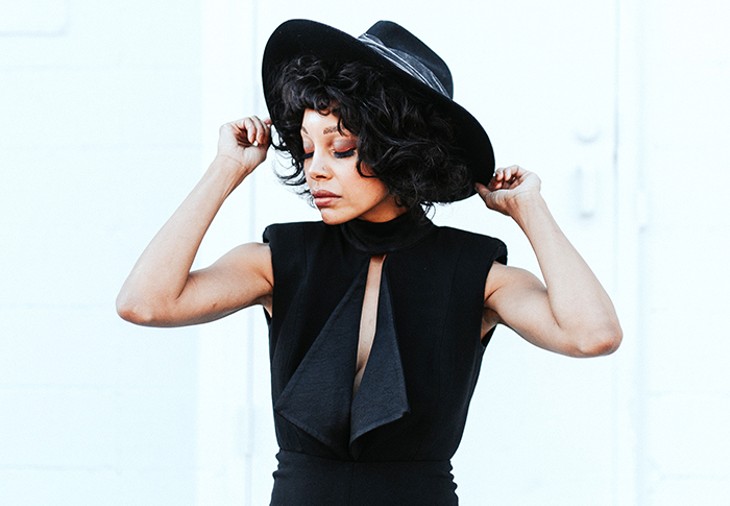 This month, The Allie Lauren Project returns to Oklahoma City, staging a musical performance like none other. Accompanied by an eclectic ensemble of musicians, founder and brainchild of the project Lauren Nicole Clare will deliver a performance brimming with passion and melody.

Having lived with her grandmother Birdie for most of her adolescence, Clare was inspired by her talents as a church organist and pianist as well as her ability to sing. Her grandfather, Harold “Hal” Roberts, was something of a musical prodigy himself, hitting the road at age 19 to tour as a trombonist for Lionel Hampton in the 1950s. Shortly before he died, he restored an upright piano for his granddaughter, an instrument on which she would practice regularly. Clare’s mother recalls him as the first person to tell her that she too would grow up to become a musician one day.

Following in her grandmother’s footsteps, Clare enrolled as a vocal major at Oral Roberts University in Tulsa. After graduation, she decided to continue her education at Oklahoma City University, where she earned her master’s degree in vocal performance. Shortly after finishing her coursework, she decided to focus on coming up with material she could call her own, officially launching her career as a musician in 2011.

It turns out Grandpa was right after all.

When naming her newfound project, Clare sought to encompass her entire family background. Referring to her maternal great-grandmother as the matriarch for the musical side of her family, she combined Allie’s first name with her own. The Allie Lauren Project was born.

In September, the ensemble released its first album, titled The Lace Which Sailed and Bore Us Well Across the Epic Echo. Though at times it might seem like a compilation of ethereal soundscapes, the tracks are interwoven with eclectic melodies hovering in a state of vibrancy dominated by multi-instrumental innovation, effectively suiting her description of the album as a true avant-garde production.

“The lace is representative of the fragility of life … and the epic echo stands for life itself, ever repeating what has come before,” Clare said. “If you just breathe, you can make it through this journey we call life. The album itself is a journey meant to be listened to as one complete song of 11 tracks, just as life is one complete song with many chapters in between.”

Though her style is not so easily put into words, she describes it as “more of a collection of everything I’m inspired by,” where she tends to “gravitate more toward mood and emotion.”

Now hard at work in the studio planning her next release, Clare seems to balance recording, tours and family life with ease. With a 2-year-old son and a husband who works full-time, you might think she’s some kind of superhero.

In reality, she’s just passionate about what she does. In recent years, touring has almost become a way of life. Thriving off audience reactions to her performances, the best way for her to gauge a show is to feel out whether her energy is being reciprocated, and vice versa.

“I think the energy from show to show changes so much just depending on who’s there, and it really is kind of like a group effort of bringing the show to life because I do feed a lot off of not only the environment that we’re in, but also who’s there as well,” Clare said.

Oklahoma shows are no exception. However, she appears to anticipate a well-received set.

“I think just the holiday really makes it special,” she said. “Typically, it’s hard to get people out in the winter and in the cold in the middle of the night, you know? So because of the holiday, there’s just a different mood in the air even though it’s freezing. I think that kind of changes everything.”

Now living in Arkansas, Clare is looking forward to returning to her home state for her New Year’s Eve performance.

“It feels so warm because it’s home,” she said. “I was born and raised and lived there until my mid-20s, so it will always hold a special place in my heart. So I think when I come home to play, it’s just extra-special because it almost feels full-circle just because I’m home. It’s always so different when you live in a different place and not everybody has the same roots that you grew up with. So whenever I come home, it always feels good being huddled up in the warmth with fellow Oklahomans. Celebrating and walking into the New Year and leaving the old year is just really special.”

Ring in the New Year with The Allie Lauren Project alongside 10,000 of your closest friends from across the state in an unforgettable celebration unique to Oklahoma City. Those planning to attend the Dec. 31 event will be guaranteed a night of revelry, delivering a taste of the illustrious Manhattan celebration straight out of New York and into OKC.

“I feel like I grew up just watching the ball in New York drop, you know, and so it’s nice to have something in your hometown where you can actually go out and have a similar experience minus the millions of people,” Clare said.

Since its debut in 1987, Arts Council Oklahoma City’s Opening Night has continued to grow. The event, presented by MidFirst Bank in partnership with Devon Energy, will offer everything from food trucks to live music. Those hoping to enjoy an alcoholic beverage will be in luck this year thanks to New Year’s Cheers, a brand-new addition serving up beer, wine and, of course, champagne for seekers of warmth and drink as 2019 comes in with a bang.

Holly Hodge, communications director at Arts Council Oklahoma City, said the night ends with $10,000 worth of fireworks set off in the span of about 8 minutes, making the entire presentation seem like a grand finale from beginning to end.

Due to the size of the display, it’s likely anyone living within city limits will have the chance to catch a glimpse of the beaming spectacle. For those unable to attend the event or see the fireworks from a distance, there’s always next year.

“There are no plans for stopping,” Hodge said. “We love this event, and we love how it brings people together to see the life of downtown. We’re doing it for the community, and if they still love it, then we still want to provide it.”

It appears that so far everything has been running smoothly. With a network of volunteers and sponsors, it’s likely operations will only become more efficient with time.

Wristbands can be purchased at the event for $10 or in advance for $8 at participating 7-Eleven stores in Oklahoma City. Wristbands are also available for advance purchase at any MidFirst Bank and through Arts Council. Children age 5 and under will be granted free admission. Doors open at 7 p.m.

The fifth annual Finale 5K will also be held that afternoon at 3 p.m.

Ticketholders planning to attend The Allie Lauren Project will be able to find her 7 p.m. at City Hall.

“I really want people with this particular show that I’ve put together to basically have the courage to leave whatever they need to leave in 2018 in 2018 and just feel really encouraged to walk into 2019 feeling more empowered than ever,” Clare said.