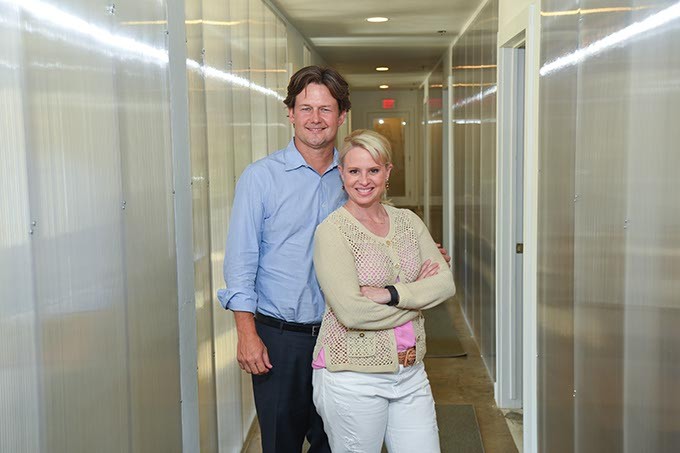 Before he took the stage, Blair Humphreys, a board member of Plaza District Association, commented on Oklahoma City’s constant love of celebrating its success.

“It’s in our DNA,” he said recently at 2015’s Urban Pioneer Awards Luncheon, an annual event celebrating the neighborhood’s renewal and honoring this year’s honorees, Keith and Heather Paul, founders of A Good Egg Dining Group.

The city’s renewal efforts are largely visible in downtown’s massive capital projects, but successes also worth celebrating are often embodied in ongoing neighborhood efforts, such as the Plaza District, and in the entrepreneurs who take risks in their efforts to improve the city’s economy and spirit.

“It really validates everything we have done over the last 15 years,” Keith Paul said about the award. “It’s been fun rehabbing old buildings and building restaurants and hiring staff with spaces that have all the character.”

“The food is great, we hope the hospitality is better than most, but we have a huge advantage with the atmosphere,” he said.

Recently, the Pauls announced they’re opening another Republic Gastropub soon in Chisholm Creek and another Tucker’s Onion Burgers in Norman. They are in lease negotiations for a Midwest City location. They said they hope to eventually open Republic Gastropub restaurant in Tulsa, too. Their newest concept, The Drake, is scheduled to open in August.

Schools can be good at identifying problems and talking about solutions. However, implementation can be tricky.

“Now the heavy lifting starts,” Mutiu Fagbayi, president of Performance Fact Inc., told the Oklahoma City Public Schools school board last week as he presented results of The Great Conversation, the monthslong process of identifying goals for the district.

Fagbayi, whose Oakland-based firm facilitates community-led planning for school systems across the country, said that nearly half of them fail to follow through on the plans and procedures they adopt.

Following his arrival nearly a year ago, Superintendent Robert Neu said he wanted the community to help establish a set of goals the district would hold itself accountable to. The Great Conversation included six months of public meetings with business leaders, educators, parents and community members.

Each goal has benchmarks the district hopes to reach. Neu said progress will be evaluated regularly.

School board chairwoman Lynne Hardin (pictured) said if the board adopts the goals, which it is expected to do later this month, it needs to take it seriously.

“It doesn’t matter in my mind what you implement unless you will do it with diligence,” Hardin said during a school board meeting last week. “If we are going to do this, then it is incumbent on this board to tell [the superintendent] that if we hire people and they aren’t going to do this, we need to remove [them]. This isn’t a maybe if we are going to commit to this as a community.”

In addition to the gardens, other finalists include Marina Bay in Singapore and Millennium Park in Chicago.

“The submissions from this year are representative of how quality urban open space has become more than just an amenity for cities,” jury chairman Michael Covarrubias said in a media statement. “The international diversity of the projects is reflective of how developers continually work to meet global demand by the public for the inclusion of healthy places in cities.”

The winner will be announced in October, and a $10,000 cash prize will be awarded to the individual or organization most responsible for the creation of the winning open space project.

24 percent. That’s the percent increase in the number of riders compared to last year’s Oklahoma City Pro-Am Classic. This year’s event was May 29-31 in locations across downtown. The event drew many local racers and others from states such as Texas, Arkansas, Missouri, Colorado, Louisiana and Kansas, said Chad Hodges, race director.