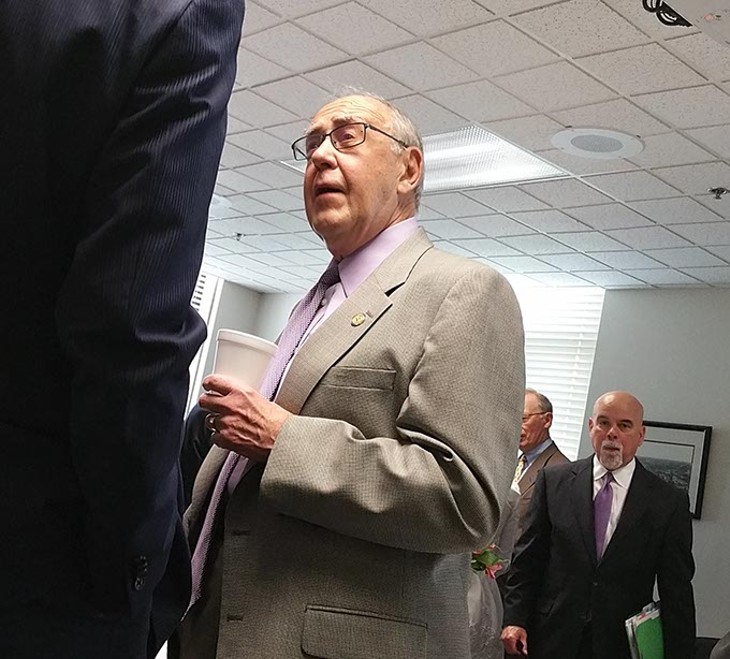 “Your paper once called me a ‘grumpy old man,’” Councilman Pat Ryan (pictured) told the Oklahoma Gazette reporter in his office before a long pause. “That’s the only thing you’ve ever got right about me.”

Ryan, a 10-year member of the Oklahoma City Council, often came across as a man with rough edges, but he never shied from sharing his opinion or calling another counselor to task on an issue he disagreed with.

This month, he begins his retirement from public service, leaving behind a reputation as a stalwart politician that, while sometimes exhausting, gained respect from his colleagues.

“He was a great analytical mind that kept you on your toes,” City Manager Jim Couch said.

Ryan was elected in 2005 as councilman for Ward 8.

“I think [the thing I’m most proud of] was ensuring that our processes work and our citizens weren’t being ground up by the machinery of the city,” Ryan said.

Board member Bob Hammack (pictured) became heated during last week’s school board meeting when he said the OKC district had not been fair in its dealings with a semi-professional football team.

The Oklahoma City Bounty Hunters had requested a lease agreement to use Speegle Stadium at Capitol Hill High School for its home games next season, but Superintendent Robert Neu recommended denial, which the board — sans Hammack — agreed to follow.

The district had offered a list of things the organization would need to make to the stadium, which team officials systematically denied as necessary when they addressed the board. There also was some concern that getting the venue ready for the Bounty Hunters could delay the site’s projected opening date.

“The Bounty Hunters have other options, but I’m not sure we do,” Ron Millican said.

The board voted 7-1 to reject the lease agreement.

Hammack shouted out, “Sorry for wasting your time!” to team officials as they left board chambers.

“There’s been a lot of research that shows us there is very clear correlation between educational attainment and health and wellness. We think we really have mutual interests and mutual benefits with the school district.”

Those are the words of Gary Cox, executive director of Oklahoma City-County Health Department (pictured).

During a presentation at last week’s OKC school board meeting, Cox said his agency would like to build a health and wellness center in south Oklahoma City similar to the center already located near Martin Luther King Elementary in the northeast. The proposed center would be next to Parmelee Elementary School.

By the numbers 4,286. That’s how many people downloaded the city’s new mobile app as of last week. Launched in October, the okc.gov app can be found in both the Android and Apple stores. Users can submit comments and concerns, including reports of potholes, graffiti and other problems. Kristy Yager, city public information and marketing director, said there were no download goals, but the app’s developer, SeeClickFix, is impressed with its usage to date.