Urban Land Institute is hosting the Livable Streets Summit, a three-day conference focusing on pedestrian, cycling and other open street issues, next week.

Registration is $25 for ULI members and $35 for nonmembers.

The opening night will feature a presentation from Risom of Gehl Architects, who will talk about the relationship between social science and design.

For more information and to register, visit oklahoma.uli.org.

GE’s new oil and gas research center will boost Oklahoma City’s standing as an energy hub and expand the growing technology sector, which might very well be the future of OKC’s economy, company officials said during a gathering in OKC last month.

“What this center does is help open the oil and gas sector up to our other areas of innovation,” said Todd Alhart with GE. “Breakthroughs in other sectors can have an impact on the development of oil and gas.”

Oklahoma City’s economy is more diversified than it was in the 1970s and 1980s, a time when setbacks in oil production had a devastating impact on the city. The last few months of dropping oil prices have had a negative impact on the city and some of its oil and gas producers, but the local economy appears to remain stable.

GE officials in town last month for a shareholder’s meeting said OKC was a logical spot for its new center, which will be able to tap into other GE sectors, such as health care, in an effort to bring new ideas to the energy field.

“Over time, the success of the Oklahoma City [research] center will become how many satellite entrepreneurial spin-offs are created by it,” said Michael Ming, general manager of GE’s new center. 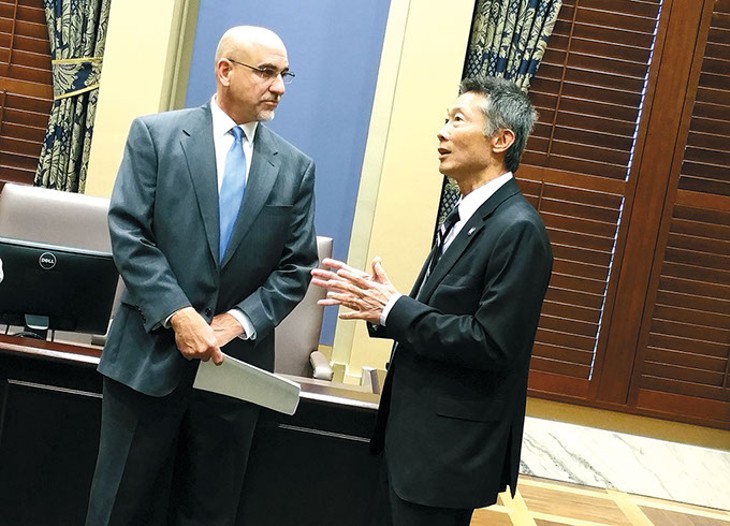 The results of Oklahoma City Public Schools’ (OKCPS) Great Conversation were revealed during a breakfast for lawmakers last week as Superintendent Rob Neu (pictured at left) said the community had picked seven goals for the district to achieve in the coming years.

“We are saying this is what is important and now we are going to measure it,” Neu said. “This will be our A through F report card … and I ask the Legislature to pay close attention to the work we are doing in these seven areas and help us by passing legislation that will help in these areas.”

A detailed presentation on the Great Commitment will be made June 8 as the district begins to develop a strategy for each goal.

“When you start to look at this, especially the strategies underneath each goal, it really comes to life,” Neu said.

Dozens of community forums with educators, parents and community leaders were held over the past several months in an effort to identify the district’s biggest challenges and determine which core goals OKCPS should strive for. The Great Conversation was one of Neu’s largest programs during his first year as superintendent.

The seven community-wide goals and measures of students’ success are:

Early Literacy and Numeracy: Every child will meet literacy and numeracy readiness criteria for successful transition from pre-k to second grade.

Maximizing Instructional Time: Every student will participate in at least 95 percent of the instructional days per school year.

Student Engagement and Voice: Every student will play a personal and meaningful role in their own learning and in the educational decision making of their school, district or community.

Mastery of Core Subjects: Every student will meet standards of performance in the core subjects at key transitional grade levels.

Accelerated Performance for Under-Performing Groups: Low-performing student groups will perform at a level that closes the opportunity, learning and achievement gaps.

Advanced Tech-Literate Courses and the Arts: Every student will complete at least one higher-level course or study outside the core subjects.

High School Graduation: Every student will graduate from high school, prepared for success in college or in career-technical fields.

“A standardized test doesn’t take into account the behavioral aspects of a student and will not tell you if the student has good time management skills. Those behavior variables don’t show up in a test.”

Those were the words of Matt Eastwood, an institutional research analyst at Oklahoma City Community College (OCCC), who gave a report to Oklahoma City Public Schools last week on variables that have the biggest impact on a student’s achievement in college. The report was based on a decade of data shared by the district with OCCC.

The data seemed to indicate ACT scores are not good predictors of how well a student will do in college, Eastwood said.