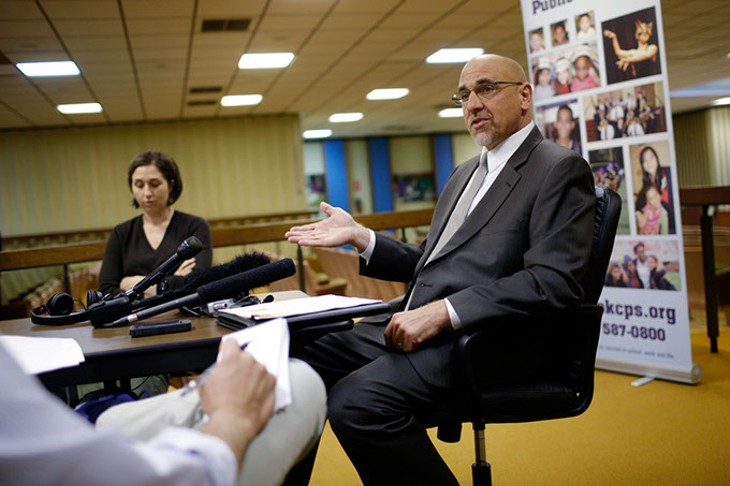 “I think we are suspending kids for lengths of time that are extraordinary. And when you’re issuing discipline to students, they need to be viewed as opportunities for intervention,” Neu said. “Our job is to educate kids, not select and sort them out.”

Neu gave truancy as an example of an offense that should not warrant suspension. The district’s internal audit found the average length of a suspension across the district is 5.8 days. However, several high schools, such as John Marshall, U.S. Grant, Capitol Hill and Classen School of Advanced Studies, have much longer average suspension lengths.

The district had been under investigation by the U.S. Education Department’s Office for Civil Rights due to its high minority suspension rate. This year, The Center for Civil Rights Remedies (CCRC) released a report showing 45 percent of OKC students and 75 percent of African-American students were suspended in 2012.

Neu addressed suspensions as a problem in his first 100 days report last year, but the CCRR report, along with the recently released internal audit, have drawn higher attention to the issue.

“Public education was designed as a select-and-sort system 250 years ago, and we are still in that select-and-sort mentality,” Neu said. “When we send kids out of our schools, it had better be for the most severe circumstances.”

Neu said the district’s work with organizations like The Learner First and The Quaglia Institute for Student Aspirations will help change some of the culture leading to high suspension rates. Invited by Neu this past school year, these consulting groups promote individualized strategies to address academic achievement and develop deeper relationships with students.

“We have got to know [students] by name, by strengths and need, but also [understand] their culture and how we can connect to their lives to where it has meaning to them,” Neu said. “The idea is to engage students and their parents in the learning process.”

Policy changes aimed at reducing suspension rates include districtwide training, better organization of data and the development of an early warning indicator system to monitor students at risk of suspension. Neu also said each secondary school would have a new assessment counselor to focus on discipline issues, a reorganized code of conduct committee is being established and new standards and accountability measures for principals who discipline students would be implemented.

However, Neu said no principals or administrators would be removed or reassigned as a result of the audit.

“They are aware of our concerns, and they are aware of the inconsistencies,” Neu said about his principals, whom he met with last week. “We are all working on this together.”

Downtown was their forest, sidewalks — where they existed — their trail. Seventy-five residents took part in the first Trailhead OKC urban hike on Sunday, April 19, completing a 6.2-mile journey through nearly every corner of downtown Oklahoma City.

“It’s kind of an adventurous thing to go walking through [Oklahoma City],” said Addison Ball, who organized the event. “Currently, the infrastructure here in Oklahoma City is not perfect for walking, and there is also a stigma that walking is not an option. But it’s actually a nice thing to do.”

Inspired by his travels to Europe and Asia, where walking long distances can be a normal part of life, Ball wanted to encourage the activity in his hometown. Expecting just a few people to show up, he was overwhelmed by the interest shown when a large crowd of adults, children and a few dogs came to walk through the streets of downtown together.

“All the new shops and bars that have been popping up lately were exciting to see,” said Jeff Nivitanont after completing the walk.

While the route took hikers past abandoned buildings and vacant lots, there were also plenty of new construction sites and new businesses to see. The group hit every neighborhood in the urban core — Midtown, Film Row, Bricktown, etc. — and often stopped traffic when crossing the street due to the crowd’s large size.

Ball said he plans to host another urban hike soon and will put more information on his Trailhead OKC Facebook page.

“Although we are pleased OGS is finally acknowledging what others have been saying for more than a year, what we really need is for the State of Oklahoma to take decisive action to prevent more earthquakes,” said Johnson Bridgwater (pictured), director of Oklahoma Sierra Club. “We would also request they update their newly launched website, which contains documents denying the link between earthquakes and injection wells.”

Bridgwater’s comments were in response to Oklahoma Geological Survey (OGS), which said last week it believes the majority of Oklahoma’s rise in earthquake activity is a result of oil and gas wells. Following the OGS statement, Gov. Mary Fallin said the state would launch earthquakes.ok.gov, which would share research, regulations, updates and news items related to Oklahoma’s recent earthquakes.

“This website will help provide Oklahomans with up-to-date and timely information about our ongoing earthquake response,” Fallin said.

Second. That’s where Oklahoma ranks on the list of states with the largest reduction in nutrient pollution to waterways, according to the Environmental Protection Agency.

“This is the sixth year in a row Oklahoma has ranked in the top five states for nonpoint source (NPS) pollution reductions,” the Oklahoma Conservation Commission stated last week. “Oklahoma ranks second for phosphorus reduction (358,469 pounds) and third for nitrogen reduction (856,906 pounds) to streams. These nutrients are major contributors to algal bloom issues in the state’s reservoirs, which can challenge water treatment facilities, lead to fish kills and, in rare cases, pose a risk to human health.”