Oklahoma Gazette and Guyutes team up to share a medicinal cannabis version of a classic: ice cream.

by Jacob Threadgill and Matt Dinger 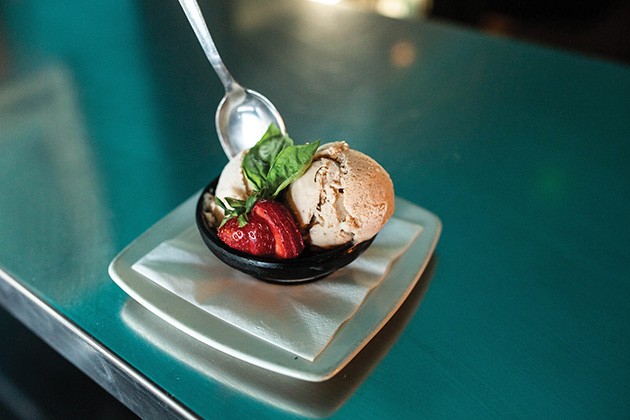 There really is no wrong time of year to eat ice cream, and the statistics back it up. Oklahoma is second in the country for its ice cream consumption, according to a 2018 study from Gravy Analytics.

Ice cream production hits its peak in June. In honor of the upcoming summer presenting the need to both cool down and receive the medical benefits of cannabis, the minds at Guyutes have devised a cannabis cream-infused strawberry basil ice cream.

In previous recipes for Oklahoma Gazette, chef Matt Pryor and owner Jarrod Friedel have made cannabis-infused oil for pesto, infused butter with lemon for fish and infused honey for a salad dressing.

For the first time, Pryor was unable to mask the taste of cannabis in the infused cream, so he tackled it head-on by adding basil to help play one “herb” off another.

“The cream has a strong [taste] potency, stronger than any of the other products,” Pryor said. “[The basil and cannabis flavors] end up becoming the same, and it’s why we went with a nice fruity flavor — we looked at cherry and raspberry as well. You were going to taste [the cannabis], so you might as well accentuate it and mellow it with the basil.”

The first step in cooking with medical cannabis is the decarboxylation process, which requires heat to separate the THC from the plant and make it ready to metabolize. It is the reason you cannot eat marijuana raw and feel the effects. You have to heat it up by smoking it or putting it in a pan on a stove or in an oven with controlled temperature.

Friedel recommends breaking up the medical cannabis — 7-10 grams will be needed to make infused cream — either by hand or with a grinder. He cautions not to grind the flower into a fine powder. Put the cannabis on top of parchment paper on a baking sheet and preheat an oven to 220 degrees Fahrenheit. If the oven rises above 300 degrees Fahrenheit, it will burn the flower and rob it of its medicinal effects.

To make the infused cream, Friedel selected Cherry Pie, an indica-dominant strain that gives patients sativa-like effects of happiness and relaxation, according to reviews on Leafly.

After the cream is made, Pryor gets to work on the ice cream base by combining regular milk and cream with sugar, heating the mixture to a boil, turning off the heat and letting the fresh basil incorporate for about five minutes.

“That’ll give it enough steeping time and enough heat to dissolve the sugars but also get the full flavor of the basil in there because we’re going to strain it out afterwards,” Pryor said.

The most difficult part of the base process is the addition of eggs to a hot liquid. Temper the egg yolks by slowly adding a little bit of the base mixture to the yolks until it is fully combined. It can be returned to the heat without curdling.

"A one-cup portion of ice cream yields
about 27.1 milligrams per serving. I ate about a quarter cup and received a mellow body high that made me relaxed
without any head cloudiness." tweet this

“We just want to thicken it, not over-boil it,” Pryor said. “You know, scorch the eggs, you start getting the scrambled egg kind of texture to them.”

After macerating the strawberries in sugar, they are combined with the non-THC ice cream base and left to cool for four to 24 hours.

Pryor uses an electric ice cream maker that retails for around $60, but cheaper hand-powered machines are available, and it is possible to make ice cream without a machine. He adds one cup of infused cream and lets the machine run for 25 minutes until it reaches a soft-serve consistency.

“They can also just stir and take it, put in the freezer and every hour or so, go in there and just kind of move it around, agitate it, just so it doesn’t become one solid mass,” he said, noting that it will take about four to six hours to reach desired consistency that way.

Pryor said the ice cream base is flexible and only requires the substitution of vanilla or chocolate for strawberries to make another flavor.

I was wary of the ice cream after Pryor’s warnings about the potential overpowering cannabis flavor but found the basil to be an excellent way to add unique flavor while masking the cannabis taste.

It was hard to tell where the cannabis flavor ends and basil begins. It is an herbaceous note that pairs well with the sweetness of the ice cream.

A one-cup portion of ice cream yields about 27.1 milligrams per serving. I ate about a quarter cup and received a mellow body high that made me relaxed without any head cloudiness. It would be the perfect way to ingest medicine by the pool or at night after a long day to facilitate falling asleep.

Heat the mixture until the sugar is dissolved. Turn off the heat and add the basil. Let it sit for about five minutes, and then strain.

Remove it from the heat and let it cool.

In a small saucepan, add the strawberries and 1/4 cup of sugar. Simmer until fully macerated.

Combine the strawberries and the ice cream base. Let it cool in the fridge for four hours up to 24 hours.

Combine the ice cream base and one cup of THC-infused cream and run it in the ice cream maker for 25 minutes until it reaches a soft-serve consistency. Put it into a freezer-safe airtight container and freeze. It will hold for up to two weeks.

Pour the decarbed cannabis into a saucepan with 2 cups of heavy cream.

Set the heat between medium and low. The cream should be just below a simmer. Do not scorch the cream.

Stir the mixture every 10-15 minutes.

Let it steep for one hour.

Place a cheesecloth over a mason jar and strain the heavy cream.

Place the lid tightly on the jar and refrigerate. Use the expiration date on the original cream.