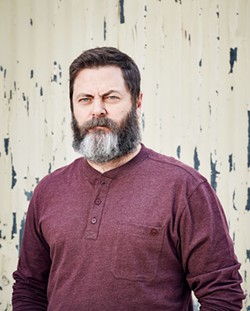 A phone call comes in from Los Angeles.

“Hi, this is Megan,” said Oklahoma City-raised television and film star Megan Mullally. “Let me try to get Nick.”

Nick, of course, is Mullally’s husband Nick Offerman. In the world of star Hollywood couples, few unions are as sweet or flat-out hilarious. Mullally, a graduate of Casady School, is most known for her television role portraying Will & Grace’s high-class socialite and imbiber Karen Walker. Offerman became a star playing meat-loving libertarian Ron Swanson in Parks & Recreation.

During the Oklahoma Gazette phone interview, both were in Los Angeles but apart, seeing to separate work engagements. After a few minutes, Mullally successfully added Offerman to the call.

“It worked, Pop!” she exclaimed.

Offerman answered with an excited squee.

Offerman stars alongside famous Western baritone Sam Elliott in dramatic comedy The Hero, which screens Friday and Sunday during deadCenter. He also co-stars with Mullally in Infinity Baby, a quirky comedy about a company that connects aspiring parents with children that never age, which screens Thursday and Saturday in downtown venues as part of the film festival.

The pair most recently attended deadCenter in 2012 to promote Somebody Up There Likes Me, in which they were both cast. They said prior commitments will keep them from returning for this year’s event, but they still make frequent trips to OKC to visit Mullally’s 95-year-old mother.

Speaking of commitments, each has been busy lately. On May 19, a one-hour special of their shared comedy tour, Summer of 69: No Apostrophe, had its worldwide television premiere on the Epix cable network.

With Stephanie Hunt, Mullally also is one-half of comedic music act Nancy and Beth, which is currently on tour into July.

And, of course, there is excitement around NBC’s announced plan to revive Will & Grace, the popular LGBT-centric sitcom that originally aired 1998-2006. Longtime buzz of a reboot became bona-fide shouts in September after the cast reunited for an election-themed mini episode. In January, NBC officially announced it will premiere new episodes this fall. 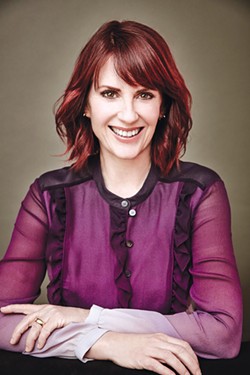 Oklahoma Gazette: In your relationship, who talks more about their hometown?

Megan Mullally: Probably me because we spend more time there. I have my mom who lives there and I have a lot of friends there. Nick has a big family and a great family, but I just have my mom and she’s 95, so we have to go see her frequently, which is nice. But I also have a lot of really good friends that I’ve had since the first grade. Nick is now really good friends with my friends. That’s my family, really — these friends that I’ve had for years and years.

OKG: You all most recently attended deadCenter in 2012. What do you remember about that experience?

Megan Mullally: It was cool for me, being from Oklahoma City. [Somebody Up There Likes Me] was one of the first indie movies that Nick and I did together. It was the movie where I met the woman who would end up becoming my band partner in Nancy and Beth (Stephanie Hunt). It’s great that you guys have a film festival there now. It was nice to just be there and feel like the hometown girl.

Nick Offerman: When you mention Oklahoma City … the first thing that comes to mind is not intelligent, curious people [who] want to see festival films. To visit a film festival festooned with just such people, with this great population of people interested in progressive and forward-thinking art, is really charismatic. As the husband of a local, I’ve really enjoyed getting to know Oklahoma City, which, on its surface, seemed like a dusty cowboy town. But pretty quickly, you get into the funky alleys and nooks and crannies where there are such great restaurants and cultural offerings. I was thrilled at how healthy the audience for that film festival is.

OKG: Nick, you’re in a couple of films at deadCenter this year, including The Hero with Sam Elliott. There might not be a more iconically masculine pairing. How did you become involved in that project?

Offerman: The filmmaker, Brett Haley, had Sam in his previous film, which is a wonderful film called I’ll See You in My Dreams starring Blythe Danner. The writer-director took a liking to Sam and wrote his next movie specifically for him. Meanwhile, Sam and I had become friends, working together on Parks & Recreation, and so the director exploited that friendship by casting me as Sam’s buddy and kind of confidant in this film. I’m very grateful that you would consider me masculine anywhere in the neighborhood of Sam Elliott, but one thing I like about the film is that it’s a pretty sensitive look at a couple of guys you might suspect had a breakfast of nails.

OKG: What’s it like talking to Elliott in regular conversation with that golden voice of his?

Offerman: His personality and his heart match the voice. He’s just a really sweet, gentle soul. … Everything he says to you feels like a hug.

OKG: Megan, you and Nick spent a lot of time together during the Summer of 69 comedy tour. What was the main thing you learned about cities you toured through?

Mullally: Just like with Oklahoma City, there are a lot of medium-sized or smaller cities around the country that are starting to have these cool pockets of culture — parts of town that are thriving and very much alive. To me, that was the biggest and coolest surprise. … [While on tour] with the band and with Nick, we would have a couple of days to stop in a city. We had some time off in Richmond, Virginia, and I recently had some time off in Pittsburgh, Pennsylvania. There’s some really cool little hotels all over the country that are springing up. In some really small towns, we stayed in a couple really groovy, brand-new, hipster kind of hotels with good food and bakeries down the street.

Offerman: It was really charismatic to learn that all over the country — being ignorant to certain regions — that there are cool kids wherever you go. And because of the advent of social media, you can now find them and eat their sandwiches and stay in their cool hotels.

OKG: I do want to mine some more information about the Will & Grace return. What can you tell me about the new episodes?

Mullally: I think the launch date is the third week in September. I think we’re at 8 p.m. on Thursdays. Our first rehearsal date is Aug. 2. Then we will have shot six episodes or so by the time it airs.

OKG: Before September’s election-themed Will & Grace mini-episode, did you ever have any thought that the series might make a full-fledged return?

Mullally: No, it never crossed any of our minds that the show might return because it’s unprecedented that a show would return. We had no reason to think, “Well, you know, one day when Will & Grace comes back,” because it’s never happened. We did that election video thing just as a one-off, but I have to say the minute that I got the script, which was probably the night before we got together ... I read the script, I put it down, I picked up the phone and I emailed one of the creators of Will & Grace and I said, “Why can’t we do the show again?” and he emailed back immediately and said, “We can.” But he didn’t know that; he was just saying. I mean, it’s never happened. But I just had such a strong gut feeling not only that we could do the show again, but that it was the perfect time to do the show again.

OKG: What are you most looking forward to in revisiting your role as Karen Walker and filming the show?

Mullally: Really, everything. The weirdest thing about this whole thing is that it doesn’t feel weird. It just sort of seems like we went away for the weekend and now we’re coming back. We have all the same people — obviously the same cast, but we have the same director, the same main writers, the same set designer, the same costume designer, the same hair and makeup people. It’s crazy. I’m looking forward to it as my vacation — that’s how I’m thinking about it.

OKG: Megan, you might be a little more familiar with this, but Oklahoma is facing a substantial budget deficit this year, as it has for several years. Education funding is tight, and a lot of arts education and extracurricular programs have been limited or removed. Do you all have any sort of thoughts or message about the importance of arts education and funding?

Mullally: Well, obviously it’s vital. I think this is systemic — the problem is you’re living in a state where you’ve got a lot of batshit crazy people [in state government] who think [President Donald] Trump is fantastic. That’s your jumping-off point. People need to keep waving the banner of enlightenment because that’s where this is all going to turn around. This ignorance and intolerance — the flame does not have enough oxygen to last forever, so it will go out; it will be extinguished. In the meantime, everyone has to stay strong, loud and proud. ... I love Oklahoma, and I’m glad I was there for all my school years, but come on; get your shit together.

OKG: Part of deadCenter’s ongoing mission is to offer exposure to new thoughts and ideas through the arts.

Offerman: Yes, and to other points of view. It’s coming to terms with the fact that, in terms of right and wrong, we’re all generally wrong because we’re human beings. We’re just all trying to keep our fannies wiped like everybody else. To be open and informed about other points of view will simply allow us all to continue getting along with each other in the planet as we move forward in these challenging times.