With a tiered tasting menu, Grey Sweater prepares over 1,000 dishes per week — just don’t ask to see a menu in advance. 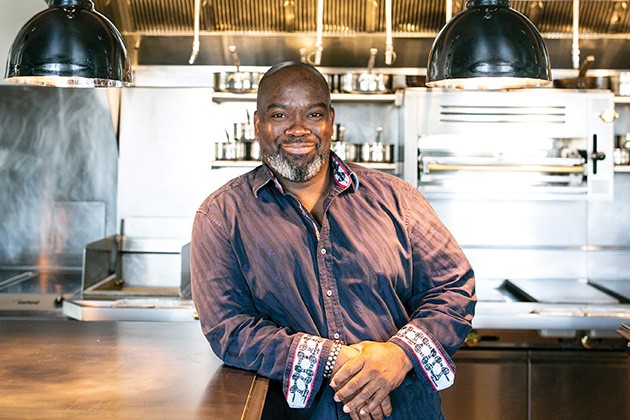 Along Walnut Avenue in Deep Deuce, chef Andrew Black is asking diners to trust in his and his staff’s expertise to take a leap of faith for a unique dining experience at Grey Sweater—the third restaurant concept Black co-owns and oversees, all three connected to The Maywood apartments.

Grey Sweater, 100 NE Fourth St., is the most ambitious of the three restaurants, joining La Baguette Deep Deuce, which is Black’s take on the Norman French bakery concept Rudy Khouri (Black’s business partner) founded in Norman more than 30 years ago, and Black Walnut, which opened earlier this year and takes diners on an around-the-world culinary and cocktail tour in a traditional restaurant menu setting.

While the first two concepts showcase Black’s culinary flair, Grey Sweater is where all the rules go out the window. The name was chosen because the eponymous color has what Black refers to as “no allegiance,” which has become a mantra of sorts for the culinary staff. The sweater is to represent the warmth of service provided at the restaurant.

“It’s not about what we’re cooking
next week; it’s about making sure
that you’re here.”
—Andrew Black tweet this

Open Wednesday-Saturday for dinner, Grey Sweater is a tiered tasting menu restaurant that lives up to its “no allegiance” pedigree by serving different dishes across each of its five, seven and 10-course meals. There is no menu available online, and one is not provided when guests arrive.

After diners make reservations for the coursed meals that are $87 (five-course), $127 (seven-course) and $177 (10-course) per person and include wine pairings for $60, $100 and $150, restaurant staff interview each guest to build courses cognizant of food allergies and diets. Grey Sweater has a wine list more than 400 bottles long, which doesn’t include a reserve list. Cocktails also change with the food menu.

Serving its first guests in October, Grey Sweater is the culmination of months of preparation. Black is on the phone with distributors all over the world — from New York to Italy and Spain — to find ingredients and inspiration for upcoming menus that change by the day and the meal.

“People might say, ‘Why can’t I see a menu?’ There’s a reason we don’t do that,” Black said. “Perception is a bitch. If I show you a menu right now, you’ve already decided what you want to eat from what you don’t want to eat. We’ll have a customer, and they’re like, ‘Oh my God; I don’t like fish.’ I’ll ask if they’re allergic, and the answer is, ‘No. I just don’t like it.’ Well, you can’t make that decision until you taste my fish.”

In an interview with Oklahoma Gazette, Black said the restaurant debuted a dish in its second week that took four months of preparation. After all that planning, the dish was gone as quickly as it arrived. When asked if he could provide specifics on the dish, Black declined. 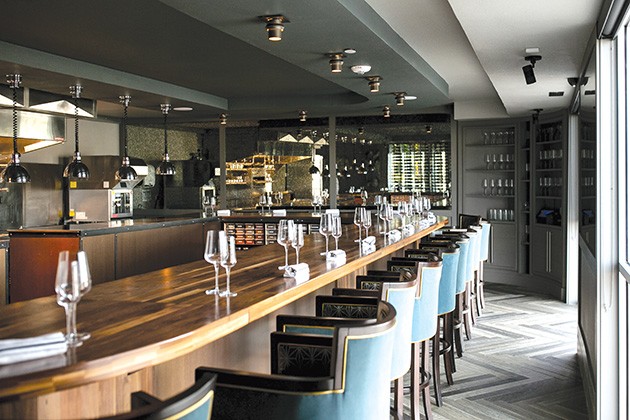 Grey Sweater offers seating around the bar to watch the kitchen in action for a communal experience, intimate seating for couples and group setups perfect for business discussions.

The restaurant is capped at 53 guests per evening, and it’s not interested in turning tables; it is the guest’s seat for the evening, which Black said lasts about two to three hours, depending on the coursing.

The need to turn tables is just one of the many restaurant rules that Grey Sweater is subverting. Instead of building a menu to what guests want (allergies and dietary restrictions aside), it is asking diners to put their trust in the staff, which is led in day-to-day operation by executive sous chef Corey Orsburn.

“I come from restaurants where [the job is] get in there and cook 500 of the exact same thing over and over again,” Orsburn said. “Being here, away from that with a free thought process, is incredible. [The menu] changes as much as we want it to. The fact people can come in here and not ever see a menu is really intriguing to me. We can change the menu overnight if we got to the farmers market and see produce we want to change. I love that; everything about that is awesome. It’s obsessive for me.”

During the interview, Black took out the calculator app on his phone and began crunching the numbers for the amount of dishes Grey Sweater will produce based on maximum occupancy (53 seats) that average a seven-course dinner. It comes out to 1,484 per week and over 69,000 dishes every year.

Chef Auguste Escoffier is credited with codifying modern French cooking methods like the five mother sauces, among other contributions in the mid 19th century.

“[Escoffier] laid down the rules long time ago that have come all the way to Oklahoma City,” Orsburn said. “There are rules you don’t break and certain things you don’t do, but that’s what we do here.’ That’s what it’s so fun and intriguing. That’s that gray area. I love everything about it.”