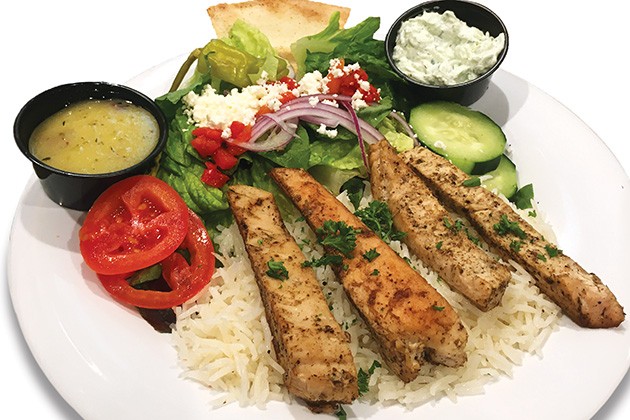 Providing healthy options has been important for Taziki’s Mediterranean Cafe since it was founded in Birmingham, Alabama, in 1997. As the franchise has expanded to more than 80 locations in 16 states, it became the first national franchise to receive designation from U.S. Healthful Food Council, in 2015.

The council, which is a nonprofit, started the REAL Certification program to recognize businesses that provide healthy options, limit fried and processed foods and provide local and sustainable ingredients as much as possible.

Not long after Taziki’s received the REAL recognition, veteran Oklahoma restaurant operator Dino Nithianandan and a group of partners secured the license to bring Taziki’s to Oklahoma in 2016. The group opened the first two locations in Tulsa before bringing it to Edmond in April 2018, at 1389 E. 15th St., Suite 128.

“We don’t call it a franchise because we’re locally owned and operated,” Nithianandan said.

The Oklahoma group continues Taziki’s commitment of supporting local organizations with donations to local charities and donates food and resources to three Edmond high schools, including nearby Edmond Memorial.

Nithianandan attended Oklahoma State University to pursue a degree in engineering but fell in love with the restaurant industry, where he worked while in school. He worked for Mexico Joe’s, where he started as a dishwasher and worked his way up to management.

“I don’t think I would have any time [to pursue engineering],” he said. “I love the restaurant business, and I love people; they keep you thinking. With a restaurant, it is hard to survive, but if you have a great good, great service and clean restaurant, you can survive.”

After Nithianandan and his partners operated Genghis Grill, they decided to make the switch to Taziki’s, in part because of its commitment to providing healthy options. 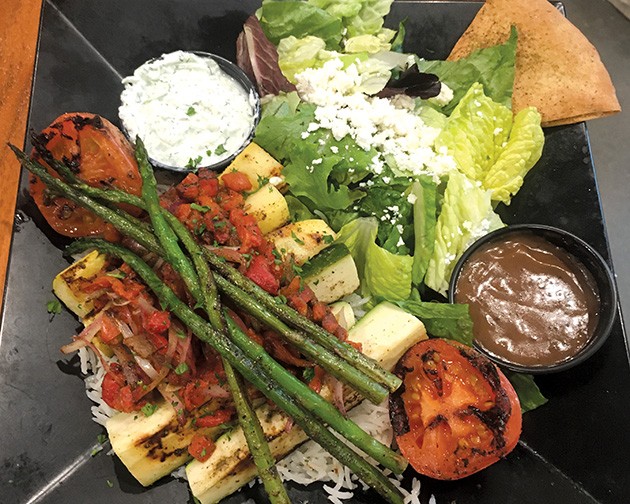 “We viewed it as expanding market,” he said. “If you read and talk to doctors, Mediterranean diet is the best diet for the next 20 years. It’s healthier, and more people are turning to healthier options. Oklahoma is a little bit different, but very recently, everyone is trying to eat more healthy and it is picking up fast.”

He said a majority of Taziki’s catering requests come from doctor’s offices and hospitals and there is a local doctor who has dined in the restaurant literally every day for four months and lost 30 pounds.

“There is no fryer,” he said. “All of our food is homemade, and we’re all about healthy food. Even the crunchy pita is made here. The only thing we don’t make is sandwich bread. We cater to gluten-free, vegetarian, dairy-free, vegan. We make everything from scratch.”

The Mediterranean Diet — one high in fish, fruits, olive oil, legumes and nuts — first rose to prominence in the 1960s thanks to physiologist Ancel Keys’ Seven Countries Study that looked to analyze the diets of seven countries to find the best to prevent heart disease. Keys’ study singled out Greece as the best for heart health. While the landmark study has been criticized for ignoring countries like France, Norway and Sweden that have diets high in saturated fat and have low rates of heart disease, its underlying elements were supported in a five-year study done in Spain and released in 2013.

The 2013 study did require a retraction from The New England Journal of Medicine in 2017, but only because 10 percent of participants didn’t receive one of three randomized diets. (Instead, they all ate the same.) For Dr. Miguel Martínez-González , who led the study at University of Navarra, the retraction only helped strengthen its findings, which said the Mediterranean Diet can slash risk of cardiovascular episodes like a stroke or heart attack by 30 percent.

“After all this long work, I am more convinced than ever of his report,” Martínez-González told The New York Times. “Seldom has a trial undergone more scrutiny.” 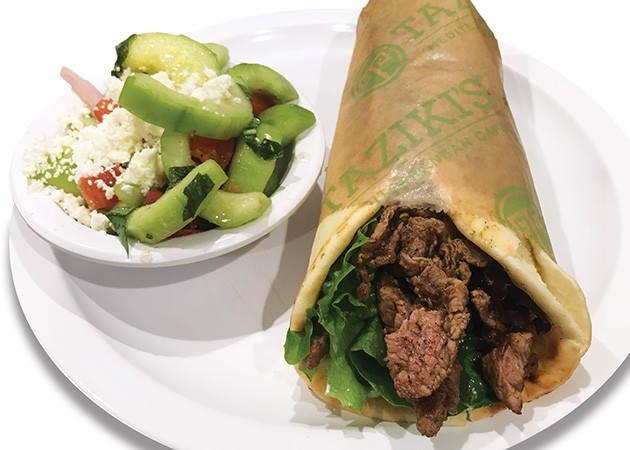 Taziki’s menu opens with dips that are all made in-house to reduce the potential for added preservatives. Hummus made with chickpeas, tahini, cumin and lemon juice can be supplemented with basil pesto and tomato topping. It also makes pimento cheese dip and eponymous Taziki dip with Greek yogurt, cucumber, dill and lemon juice. Whipped feta with cream cheese and lemon drizzled with honey is a new addition.

Salads can be topped with any protein: shrimp, chicken, salmon and lamb. A salmon salad ($13.99) features a freshly grilled 8-ounce filet. The salad is topped with candied pecans, chickpeas and tomatoes.

Housemade pita wraps gyros ($7.29-9.89), and the lamb option is the most popular, Nithianandan said.

“It’s hard to get good lamb anywhere,” he said. “Most gyros are lamb and beef mix, but ours is 100 percent lamb. If you are a big lamb fan, we have the best lamb.”

It combines lamb with skordalia sauce made with roasted garlic, red wine vinegar and blended pita bread as a thickener.

“You can relax on the couch next to the fireplace with a glass of wine,” Nithianandan said.

He and his partners want to add a fourth Taziki’s location in Oklahoma City and are looking for options.