The University of Oklahoma says it acted quickly against John Scamehorn, but many of his accusers disagree

John Scamehorn dreamed of a world where “insolent women causing trouble are given their just reward.” Now a group of outspoken women might lead him to his own comeuppance.

In the first weekend of June, several Facebook and social media posts popped up with allegations of sexual harassment against Scamehorn, an emeritus professor at University of Oklahoma (OU) who was both a frequent donor to the school’s Weitzenhoffer Family College of Fine Arts and financier of many independent film projects within the Oklahoma film community.

The allegations against 64-year-old Scamehorn are wide-ranging. In an open letter signed by 30 female accusers — some OU students and some not — specific allegations include “sexual advances, strong and inappropriate innuendo … stories rife with sexual content, [being] stalked and even coerced into taking embarrassing and compromising photos.”

One of the main concerns accusers have shared is the allegation from one former student who claimed on social media to have found a large archive of photos of OU students, local actresses and their relatives collected by Scamehorn. Many of the alleged photos are said to be cropped and doctored in a way that it appears the subject is being strangled or hung in a noose.

Scamehorn was frequently seen at OU theater events with a camera. Many of his accusers thought the behavior was odd but were often reminded by program administrators that his donations were vital to the acting department.

The social media posts against Scamehorn were partially fueled by the #MeToo movement against sexual harassment by people in entertainment and positions of power. They also seem to have been prompted as a response to an article by Scamehorn on the openly misogynistic “men’s rights” forum Return of Kings. Titled “What the Western World Would Look Like If Women Were Never Granted The Right To Vote,” the article is Scamehorn’s attempt to sell the site’s users on Pax Masculina, a dystopian short film he produced, financed and filmed in Oklahoma.

“Tired of every new film having a militant feminist theme?” Scamehorn writes in a description of the film. “Want to see a universe on video in which men create a paradise on earth with their wise rule, and insolent women causing trouble are given their just reward? My short film (18 minutes) is called Pax Masculina (Latin for “peace of men”) and is an alternate history science-fiction movie.”

The Return of Kings post has since been deleted. Scamehorn’s IMDb (Internet Movie Database) page lists at least 14 film projects he has produced since 2013, including locally popular full-length features The Posthuman Project (2014) and The Harvesters (2016).

Scamehorn is an emeritus professor at OU, but not of the arts. He has a background in chemical engineering and was formerly Asahi Glass Chair and George Lynn Cross Research Professor for the School of Chemistry.

Scamehorn was also listed as a vice president and principal of Surfactant Associates, Inc. According to a bio that has since been removed from the firm’s site, Scamehorn specialized in formulating soaps, toothpaste and detergents and “has published nearly 200 archival papers or book chapters, edited five books, and coauthored 18 US patents.” An Oklahoma Gazette email inquiring about his current status with the firm was not immediately returned.

Accounts from several of Scamehorn’s accusers say in February 2016, OU acting and theater students were called into a closed-door meeting and told by Helmerich School of Drama director Tom Orr to stay away from certain school donors.

No one was specifically named, but shortly after the meeting, the fine arts college cut all ties with Scamehorn. The move came after a monthlong school investigation in which several students made sexual harassment complaints against Scamehorn.

In a June 7 statement responding to accusers’ open letter, OU said it acted swiftly in addressing the 2016 complaints against Scamehorn. But others are skeptical of the school’s role.

“We believe the school has massive culpability,” said Christopher Cooke, a Texas-based lawyer who represents a former OU student interested in filing civil cases against Scamehorn and the university.

Cooke said his client filed a complaint with OU’s Title IX office prior to the Feb. 2016 closed-door meeting, but no action was taken.

“We have been told that that file no longer exists,” Cooke said.

According to OU’s statement, the university barred Scamehorn from future paid or unpaid work with the university. His donor status was terminated, and his contributions were returned. The university also shared their information with law enforcement and other community organizations.

“In short,” the statement reads, “the university’s actions were immediate and intended to further our number one goal, the welfare and safety of our students.”

But Scamehorn’s ties to the college were not totally severed. He still held emeritus director status on the school’s Institute for Applied Surfactant Research. Scamehorn was scheduled to speak at an on-campus conference the institute was hosting as recently as June 4, although his appearance was later canceled. He also has an active university email account from which, on June 5, he emailed the following statement to Oklahoma Gazette:

“I am aware of the rumors and allegations made against me online and in local media reports. In the strongest terms possible, I deny any wrongdoing.”

Scamehorn did not respond to follow-up questions from Oklahoma Gazette.

OU is currently in the process of reviewing Scamehorn’s emeritus faculty status.

Cooke said there is no timeline for when any civil suit might be filed.

“It’s very early in the process,” he said, “but from what I’ve seen so far, what’s happened here is abhorrent.”

Some of Scamehorn’s accusers have told Gazette that they are fearful of speaking directly against Scamehorn in fear of retaliation. But some are willing to speak. Former OU student Gabrielle Reyes, who is no longer based in Oklahoma, feels confident because she believes she is on the side of truth.

Reyes posted a video on her Facebook account describing her time at OU, her interactions with Scamehorn and the university’s conduct. One thing she notes in the video is that Scamehorn attended nearly every theater event with his camera and was highly involved in the program. She recalls knowing of other acting school donors, but none of them were as closely tied to the program as Scamehorn.

“[He was] always funding everything we were taking part in,” Reyes said. “He was on every school trip and at every opening night.”

Reyes said she did not have any significant one-on-one interactions with Scamehorn. Her main concern has always been how the program, and particularly its director Orr, seemed reluctant to address student complaints. After Scamehorn’s ties to the program were severed, Reyes remembers Orr frequently griped about not having the finances for any of their activities.

“Tom Orr has been a sickness since I got there,” she said. “He has been before me, and he has continued.”

Reyes said Scamehorn was a known “creep” in the program and complaints against him before 2016 were often ignored. She believes Orr and the acting school chose not to act on any complaints because of the money Scamehorn was contributing to the program.

“That’s one of the issues,” she said. “Many people had spoken up — women and men — but nothing had been done.” 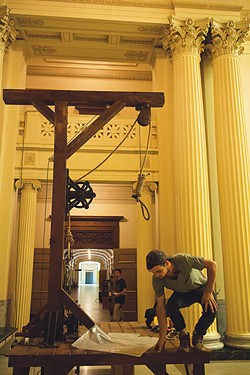 When actor Darryl Cox agreed to participate in Pax Masculina, he and seemingly everyone else on the film believed it was a dystopian, steampunk tale of women overcoming an oppressive society ruled by men. The intention, it turned out, was something much different.

Cox said on the set, Scamehorn constantly complained that female actresses’ costumes were not skimpy enough. He also seemed to take pleasure from the film’s many scripted hanging scenes and graphic violence.

Cox and many others were aware that Scamehorn was “off,” but thought they had him under control and that his proclivities could be contained.

“We were wrong,” he said. “We never should have thought we could do that. He had the money, and once the film was finished shooting, he ran off anybody who didn’t agree with him and hired people who didn’t know anything about him.”

After principal photography on the film had wrapped, Cox said Scamehorn hired outsiders to re-edit the footage in the way he wanted.

The short later screened in at least one film festival. As of Gazette’s deadline, it can still be viewed on Vimeo.

After his experiences with Pax Masculina, Cox said he would warn actresses not to get involved with Scamehorn.

“I’m not setting myself up as a hero here because I participated with him and that’s a mistake I made,” he said. “I have to bear the consequences of that.”

Cox said many women who have spoken with him about Scamehorn in the past have said they felt like their complaints were being ignored. Cox believes Scamehorn was calculating and realized he had some safety because his female accusers would not be taken seriously.

“The real tragedy of this is that he was right, and that is horrendous,” Cox said. “We can’t buy into a misogynist’s worldview, and we kind of did.”