And like so many things that aren’t technically alive, I ate those hot dogs. And they were pretty good. 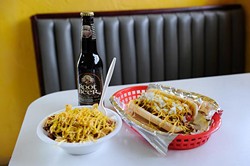 To be honest, it was the logo as much as anything that got me in the door.

Hot dogs are a hard sell around here because everyone thinks they can make one. Specialty dogs can be a draw, and there’s nothing like a grilled dog purchased from a street vendor after a night of liver-pickling fun, but the classic diner dog has not caught on around these parts nearly as successfully as, say, hamburger stands and taquerias.

But there’s something about that smiling, waving hot dog at Mighty Dog, 2216 N. Portland Ave., that gets me. He knows. Look into those eyes. He knows what’s coming: a searing-hot grill; a snug bun blanket; and then a slathering of salves like mustard, chili and coleslaw.

And then. And then. He knows. But he’s still smiling and beckoning you in. Why are you so calm about this, Mighty Dog?! Why won’t you save yourself?!

After going inside and talking with the nice lady behind the counter, I found out the reason he’s not panicking is that he’s just a cartoon character. Real hot dogs don’t have faces or arms and are not technically alive.

And like so many things that aren’t technically alive, I ate those hot dogs. And they were pretty good.

The best of the bunch is the eponymous Mighty Dog ($2.75, or $4.99 with a drink and side), which is an all-beef hot dog grilled to give diners that perfect snap when they bite in. On top: chili, cheese, onions and mustard (if you love America) or ketchup (if you have given up on happiness).

Could you make a chili cheese dog at home? Probably. But then you have to make chili. And grill hot dogs. And buy buns (which come in a package with a different number of buns than you have hot dogs). And, frankly, wouldn’t you rather let a professional do this for you? Add some hot sauce. Let the whole thing steam and melt inside the foil wrapper. Embrace the comfort.

For more flavor, you can go for a Polish dog or a hot link ($3.49), which add a bit of spice and kick to the normal hot dog spice blend.

The slaw dog is a pretty brilliant creation (though quite different from the kind frequently found in El Reno’s thriving Onion Burger District). This coleslaw is much more mayo-centric, but with a lovely cool crunch that sweetly plays against the heat of the chili and the tender texture of the Schwab hot dog.

I would like to say nice things about the cheeseburger ($5.99 with fries and a drink), but “Well, it was OK” is about as far as I can go. This burger could use a little more seasoning and a little more care on the grill to keep the patty tender.

Better was the Frito chili pie ($3.99), which covers Fritos (you’ve seen them) with the same chili they use on the hot dogs (meaty and delicious) and tops the whole mess with shredded cheese and onions. The grease from the chili starts to soak into the chips after a little while, and I know that doesn’t seem like a good thing, but it absolutely is. That’s flavor country, friends.

Many of the combos come with a choice of sides, including potato salad and potato chips. As a fan of a good, homemade, delicious potato salad, I would recommend you get a bag of potato chips.

If you find yourself parched by all these chips and hot dogs and the like, might I point you toward a bottle of root beer? Mighty Dog has a few smaller brands, and they’re all pretty delightful.

Mighty Dog is kind of a ramshackle old building from the outside, but they keep it nice and clean in the dining room. And there’s that hot dog, man, just waving at you without a care in the world.

I know you’re not real, Mighty Dog, but I still want to know your secrets. Why are you so happy? Is it because you’re not wearing pants? I guess I’ll just keep eating hot dogs until I find out.

What works: Hot dogs and hot links, specifically those covered in chili. What needs work: The hamburgers are kind of blandburgers. Tips: Traffic on Portland moves fast, so watch yourself pulling out.