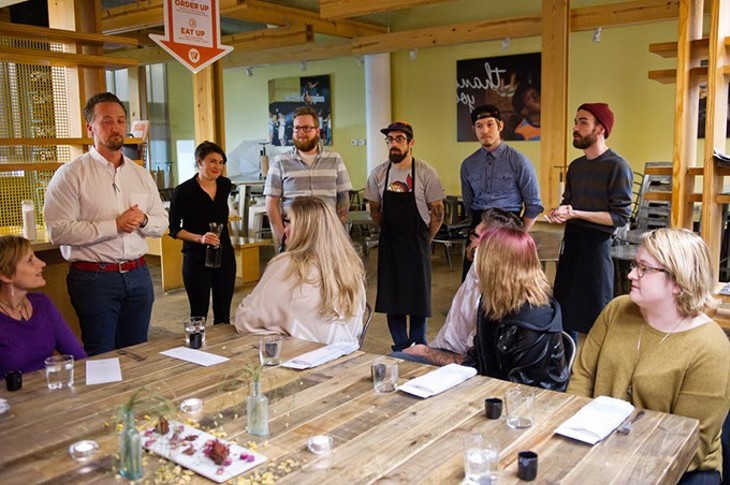 As 6:30 p.m. nears, Colin Stringer’s long, loose limbs tighten. He’s rearranging a pecan wood fire again. He’s bouncing lightly on the balls of his feet. It has been a week since his last dinner.

Nonesuch was born via phone while Stringer was working outside Oklahoma following the close of Nani. His heralded collaboration with Andon Whitehorn and Jeremy Wolfe, preparing multicourse, intensely local, foraged haute cuisine, ran afoul of the Oklahoma City-County Health Department, which successfully shut down Nani for not submitting to a restaurant inspection. 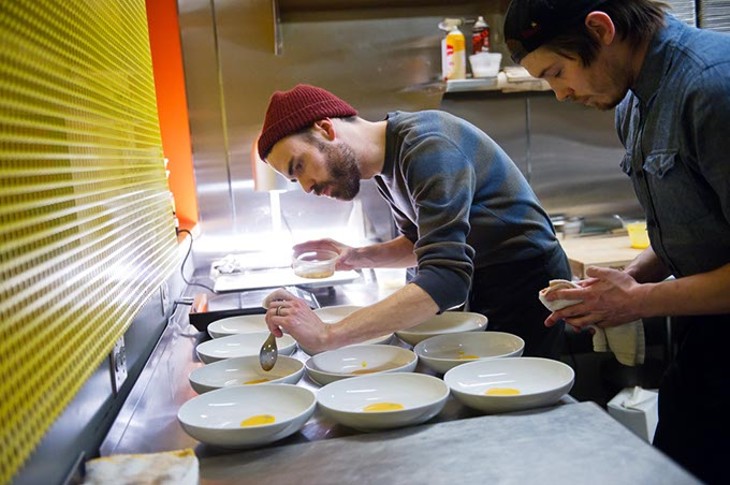 Nani’s chefs maintained their creation wasn’t a restaurant, but a private chefs-for-hire business hosted in their home. After closing the doors of their labor of love, Stringer and Whitehorn were honored by Eater.com as “young guns” to watch in the food world.

Stringer left OKC to stage in different kitchens, which is when Waffle Champion owner Todd Woodruff called. He wanted to know what was next, and he wanted to be a part of it.

“If Nani proved one thing, it’s that Oklahoma City is ready for a tasting menu restaurant,” Stringer said.

They bandied about names like Alchemy and Ceremony, but then Stringer said, “nonetheless” and Woodruff thought of Nonesuch.

“It’s a word that means it’s unlike anything else,” Woodruff said.

In the kitchen, Wolfe and Stringer oversee the construction of 14 identical plates of food. It was only supposed to be 12, but they made a mistake and overbooked the night’s dinner.

Guests started arriving a little before 6:30 p.m. — two tables of two, one table of eight. Woodruff said it’s a nice change from their first few dinners.

After a few dismal showings, business picked up. On. Feb. 15, they had sold out five nights in a row.

The menu is constantly evolving, Stringer said. That night’s ninth course was “mushrooms, peanut chocolate.” A few weeks prior, it was in the form of a soufflé. That evening, it was a candy bar.

“It starts off tasting like a Snickers. Then the earthiness of the mushrooms comes through,” he said.

Taking their cues from the season, Wolfe and Stringer spend Saturdays searching farmers markets for what’s fresh, local and will taste best. It can be limiting, but limits inspire creativity.

“Been using a lot of roots,” Stringer said. “But with all the snownadoquakes, we got a little surprise: wild onions in February.”

That was what Nate Gaston was blanching. Helping out every other week at Nonesuch in addition to his role as kitchen manager at Waffle Champion, Gaston said he’s receiving an incredible education in taste — more than he learned in culinary school.

“I’m taking Colin’s advice and slowing down when I eat, trying to break down the flavors in each meal,” he said.

As he examined the onions, Gaston called out for “Chef Colin” to inspect his work and make sure he was meant to remove the brown tips at the end of the long, green onion sprouts.

It was a near-constant conversation as the crew checked with one another again and again. Wolfe said that’s the dynamic of their cooking — if you don’t say something, nothing gets done.

“We are hypercritical of each other,” he said. “We taste everything, and we don’t hold back.”

They screw up a lot, Stringer said. But repetition hones their techniques and unfiltered feedback keeps them cooking food that tastes better each week.

Great food takes time — not just time cooking, but plenty of hours spent shopping, tasting and preparing ingredients. Starting Saturday and finishing up Monday night, each of them will spend about 60 hours working over the course of three days. 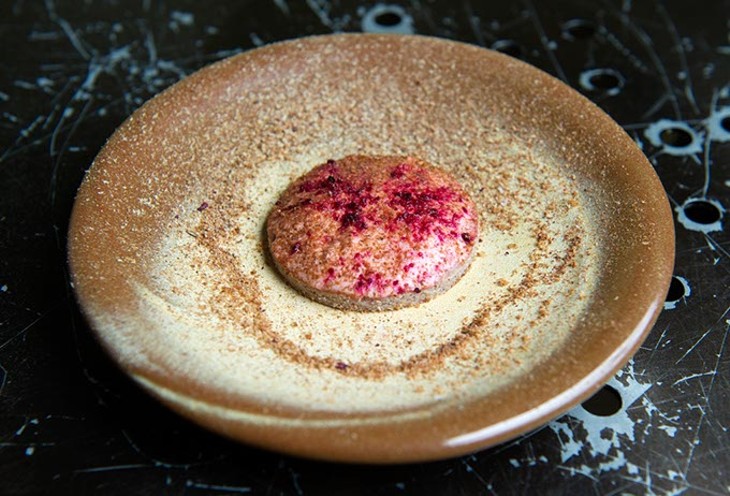 The next few days are spent taking care of the other niggling little details, like how much wine they have and what they can get for the next dinner or food costs and labor costs — the nuts and bolts of the restaurant.

And make no mistake — Nonesuch will be a restaurant, albeit one with a singular concept for OKC. Open only a few days a week, the tasting menu concept brings the current experience to a different environment, offering diners staggered seatings of the same chef’s choice dishes.

They’re happy with the food right now, but Stringer said it will improve as they get to cook more often and for more people.

Above the staging area, there’s a cross-stitch sign that reads, “Make it nice.”

That’s what Gaston and John Dame strive to do as they artfully prepare 14 plates of pecan cheese, hoshigaki (dried persimmons) and greens, spritzing each with vinegar dressing before they head out to the tables.

Stringer and Wolfe are busy grilling scrap bread over the smoldering pecan wood and clarifying goose fat butter. Despite the menu changing each week, the team works like a well-oiled machine.

And in those moments, when the work is all that’s in front of them and the conversation in the kitchen is matched by the sounds of guests eating farmers cheese tortellini and bison with rutabaga, all that tension is gone. Stringer’s limbs are long and loose again. Wolfe serenely presses out rounds of bread.

Then the dinner is over and the clock begins again — another week until dinner.

Tickets to Nonesuch can be purchased at nonesuchokc.com.