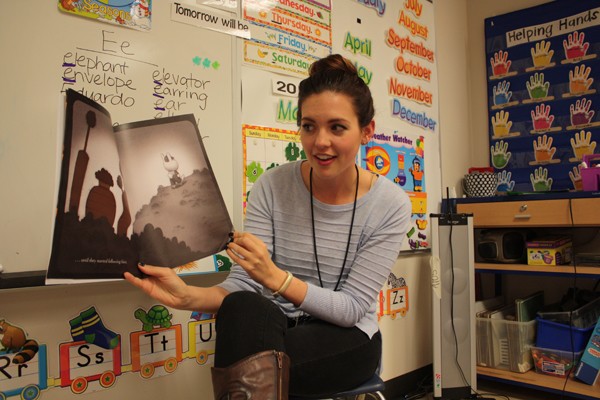 When Micah Graham was in her final year of undergraduate studies, she decided she wanted a job with an opportunity to impact her community.

While pursuing her studies at the University of Oklahoma Price College of Business, she committed to serving the college campus and the Norman community by volunteering at a local church’s after-school program.

“The thought of sitting behind a desk and not feeling like I was making any kind of a difference was terrifying,” said Graham, a marketing major.

January 2015, Graham was accepted into Teach For America, a nonprofit organization recruiting new college graduates to teach for at least two years in disadvantaged urban or rural schools. In August, Graham was assigned to Oklahoma City Public Schools’ Rockwood Elementary School. There is a desk in the prekindergarten classroom, but Graham spends more time walking around her classroom, visiting with her students at learning centers or reading children’s books to students seated on the brightly colored carpet.

“You leave every day knowing you made a difference,” Graham told Oklahoma Gazette. “You changed somebody. They learned the letter ‘E’ or learned to share.”

Teach For America recruits top college graduates and trains them to teach in urban and rural public schools across the country. Before the school year begins, new recruits go through extensive educator training to prepare for the first day. Throughout the school year, corps members work closely with the organization for additional professional development. Teach For America corps members deliver high-quality education for their students.

The organization launched in 2009 in the Sooner State with service to Tulsa area schools. Over the past seven years, Oklahoma Teach For America has grown to the third largest in the nation, right behind Chicago and New York, said Art Serna, deputy executive director of Teach For America in Central Oklahoma.

“The need is great, but also there is a community behind Teach For America that says, ‘We see value in what you provide,’” Serna said. “The community has provided funds and support to make it happen.”

The need for Teach For America circles back to the state education landscape, a rough terrain for administrators and educators gripped with teacher shortages, constant changes in academic curriculum requirements, increased class sizes and dwindling dollars for classroom funding.

“That says something to a new leader who wants to make an impact,” Serna said. “The millennial generation is not about salaries. They want to make an impact on society. We will say, ‘This is where we are at in Oklahoma at this time in various areas, including [student] outcomes compared to other states. There is great need. … You can come and contribute significantly to change the outcomes of students.’”

Before Graham was assigned to Rockwood, she underwent training at Summer University, where she assisted with OKCPS summer school. With her Teach For America instruction in early childhood education earlier in the summer, Graham worked alongside another TFA corps member and a master teacher at the district’s Bodine Elementary School. During lessons, Graham could look to the master teacher to offer hints, suggestions or encouragement. Summer University is a five-week program.

When school began at Rockwood, Graham was assigned one of the school’s three prekindergarten classes. She teaches students who are ages 4 or 5. Many never attended preschools or day care programs. Some arrived at school with no English language skills. Graham said the first six weeks proved to be an adjustment phase for many of the 20 students.

Graham explained she was fortunate to have Teach For America training and resources and the ability to look to the school’s lead teacher for advice and guidance. Her mother, a prekindergarten teacher in Ponca City, also proffered advice. During the school day, Graham works alongside a teaching assistant trained through the Head Start program.

With a third of the academic year gone, Graham gets excited when a student who came into the classroom only able to speak Spanish says a complete sentence in English. Other proud moments come when she overhears her students talking to one another, repeating a recent lesson.

“I hear words that I know I taught them,” Graham said. “I get this feeling that they learned that in my classroom.”

Graham expects to teach prekindergarten next school year at Rockwood, but with her training in early childhood, she could transition to kindergarten. After her two-year commitment, she plans to pursue her business and marketing training but hopes to stay in the education sector. She sees herself working for a nonprofit organization, committed to education and helping children.

Serna said Graham’s experience and future plans are not uncommon for corps members. Some continue to teach in classrooms, and others pursue leadership roles in education and become administrators.

“It is a great opportunity for someone who never thought about education but cares deeply about communities and wants to contribute to education long-term,” Serna said.

Friday, Teach For America-Central Oklahoma hosts its first Donors Appreciation Celebration event, a time for the organization to recognize contributions and commitments by local school and community leaders and businesses.

The future is bright for the organization in central Oklahoma.

Leaders plan to launch a strategic plan for the area in June. The initiative will examine how to expand and grow the program’s impact, which could include expanding into other parts of the state. Additionally, Teach For America offers professional development and learning opportunities to practicing teachers. Its driving focus is to ensure all children have access to an excellent education.