“It is so important that they learn to have fun without getting high or drunk,” Maddox said. “That’s the challenge. For so many, that’s what they did.” 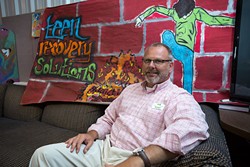 Denise White and her teenage son, Addison, had run out of options when they arrived at the Teen Recovery Solutions office.

For the past few years, White had tried every course of action to treat her son’s drug addition. He started smoking marijuana in middle school, but his drug use escalated to abusing synthetic marijuana and prescription pills in high school.

They tried new school settings as Addison enrolled in alternative, military and homeschooled programs. He checked into an out-of-state treatment program, with White flying in on parent weekends.

Teen Recovery Solutions (TRS), with its private recovery high school and youth and parent-focused groups, proved to be the change they both needed.

“This is a place where they meet kids where they are,” White said. “It’s not just sobriety on a recovery level, but academic, social and spiritual support that helps the kids move forward.”

For nine months, Addison has attended classes at TRS Mission Academy High School. In the afternoons and weekends, he and his peers stay after school for youth-focused support groups run by three recovery coaches.

TRS clinical director Mike Maddox said the group meetings, called alternative peer groups, blend a church youth group, after-school program and recovery program into one. Some days, the teens play video games or volleyball. The next day, they might travel across the Oklahoma City metro to attend music festivals or check out bowling alleys and laser tag venues.

“Recovery has got to be more fun than using or they will go back to it,” Maddox explained.

Intermingled into the outings and activities are teens being real with one another, providing each other mutual support by sharing their experiences, strengths and hopes.

“With teens, their social life is pretty important to them,” Maddox said. “We try to create a new one. We create a safe and healthy community to make it easier for them to let go of those unhealthy and destructive relationships. It’s not easy, and it’s not immediate.” 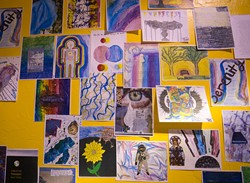 Next month, TRS enters its fourth year of providing alternative peer groups for clients. The school, founded by a group of parents, traces its roots back a decade and is one of 40 recovery schools in the nation.

Since TRS added alternative peer groups, the nonprofit’s abilities to serve teenagers and their families have amplified. Teenagers and their parents are part of a distinctive community, one that is sincere, judgment-free and dedicated to support. Additionally, the alternative peer groups allow the nonprofit to reach more teenagers, as the groups are open to those not enrolled at the school.

“A recovery high school can’t do what it does on its own,” explained Maggie Brown, TRS director of development. “So much of the addiction takes place after school and on weekends. We want to accommodate their social needs and their desires to have a community.”

In a separate study conducted by Vanderbilt University, about 85 percent of teens who went through addiction treatment and returned to their original schools started using drugs again within a year. Those numbers don’t surprise Maddox or those in the recovery community. Anyone in recovery from alcohol and drug addiction tends to perform better in a new environment and away from those they used drugs with before.

TRS shows teens that they can have enjoyment and friends without drugs or alcohol involved.

“It is so important that they learn to have fun without getting high or drunk,” Maddox said. “That’s the challenge. For so many, that’s what they did.”

“This disease will take your life,” Maddox said as he discussed addiction. “Many of these teens have had second, third or fourth chances. You see the light come on for the teens, and you see the parents get it. Eventually, the parents trust again. … To see the healing process take place is pretty cool.”

This spring, TRS launched its first satellite alternative peer groups at Oklahoma City’s All Souls’ Episcopal Church. The new relationship brings larger facilities — such as the church’s gymnasium, game room, kitchen and fields — for TRS to use in its programs. Additionally, the organization can reach more teens as it offers an open 12 Step meeting and parent support group each Monday night.

TRS hopes to grow the satellite groups with meetings in the south, north and western areas of the OKC metro.

“We want to help more families,” Maddox said. “We know what we do works, and it works well.”

Not a day goes by that White and her son are not grateful for TRS and Mission Academy. The program has helped them develop a stronger and healthier relationship and form deep friendships with other teens and their parents in the program.

“The number one thing is you’ve got to find help,” White said as her advice to parents with a child that struggles with addiction. “You’ve got to walk the journey with your kid, and that means being involved in a supportive community for kids and their parents.”