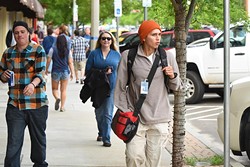 Norman Arts Council defines a certified cultural district as a “mixed-use area of a community in which a high concentration of arts and cultural facilities or activities serves as the anchor of attraction.”

Norman is often called the City of Festivals, and Boydston said they launched Norman Music Festival (NMF) more than eight years ago to promote both arts and commerce and more recently established 2nd Friday Norman Art Walk with a similar goal.

The music, culture and art festival grew from one day with about 1,000 attendees to three days with an estimated 2015 attendance of 80,000, Boydston said.

“I think that it’s become this really nice symbiotic relationship between downtown Norman and the businesses, restaurants and bars that are always down there,” he said. “The festival shines this really bright spotlight for all of them for the other 362 days of the year.”

“We thought that we should give back to the community throughout the whole year and not just during the festival,” Bui said.

It, too, added music acts to its lineup each month as it grew.

Guestroom Records is located on Main Street, and its owner Will Muir said he has seen dramatic growth throughout downtown. The shop sells music and art and hosts live music events through the year. (See our Record Store Day: Black Friday story on P.39.)

“Except for the furniture stores, for a long time, we were the only retail place on Main Street,” he said. “I have a feeling that we are going to start seeing more results of the designation soon. … It does add a sense of pride that, yeah, this really is as good as we think it is.”

The Oklahoma Arts Council website shows that both rural and urban districts can apply anytime during the calendar year and certified districts must apply for renewal every three years.