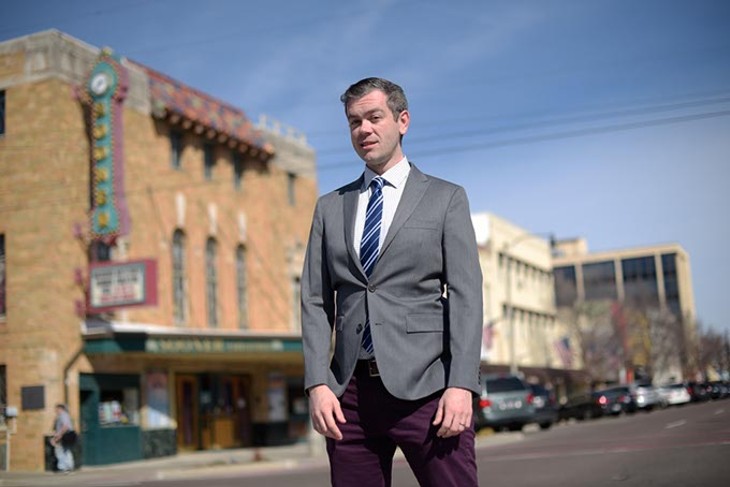 September Saturdays in Norman are mostly known for football, but this year, a new film festival brings some variety to the city’s fall weekends.

The University of Oklahoma will be playing a road game at Baylor University on Sept. 23 when the inaugural Norman Film Festival stakes its claim on historic downtown Norman. The multigenre festival screens at several different venues, including The Sooner Theatre, 101 E. Main St.

Local artist and filmmaker Chase Spivey is the event’s director and creator. He said the festival is now accepting local and international submissions through July 2, and a full screening schedule should be ready by the end of July. Submissions can be made at normanfilmfestival.com.

Free all-ages educational programs, hands-on exhibits and live music create an engaging and immersive experience in addition to the screenings. An awards show closes out the event.

Spivey has previous experience as a musician and songwriter and is a former member of Ghost of Monkshood. In 2011, he became a co-owner at Norman art gallery Form and Function Lab. He managed stage video for Norman Music Festival in 2012 and ’13 and has been commissioned for two Norman public arts projects.

He has long thought about bringing a film festival to the area but did not fully commit himself to the idea until last year. There was a lot of talk about the state budget crisis and a lack of funding for education — especially in the arts. Spivey asked his son what he wants to be when he grows up. He wants to direct movies.

“I felt bittersweet about it,” Spivey said. “I have always loved living here, but I felt like my son and lots of Oklahoma kids were looking forward to a deficit of arts education and opportunities in the near future. I wanted to show them that being a filmmaker in Oklahoma was a viable option.”

Spivey teamed up with friends David Birdwell and Ben Lindesmith to create a nonprofit to help and enable young Oklahoma filmmakers.

He said local filmmaker response to the new festival so far has been both enthusiastic and overwhelming. The open call launched in mid-January, and they have been flooded with submissions.

June’s annual deadCenter Film Festival in Oklahoma City is the preeminent festival of its kind in the region. Spivey said he is grateful for its work and the impact it has had on local filmmaking. He said his event is not a competitor, and he scheduled the event in the fall so it wouldn’t distract from festivities earlier in the year.

“It’s like if deadCenter and Norman Music Festival had a love child,” he said. “Our goal is to continue and expand the work that these lovely people have started.”

The festival is looking for a limited number of sponsors and partners for the event. Those interested can email normanfilmfestival@gmail.com.