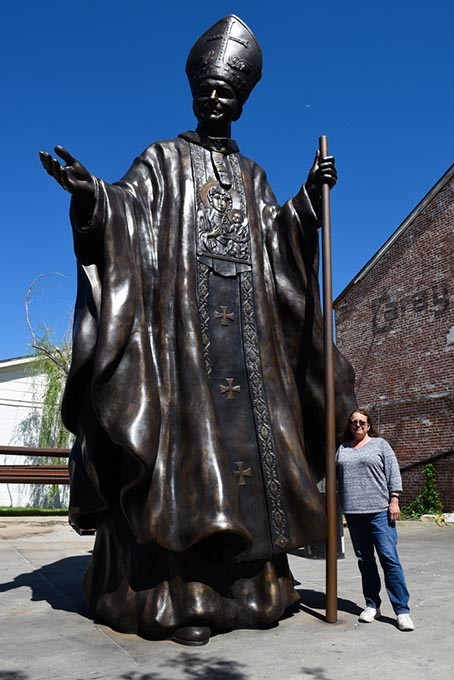 He stood like a Goliath outside the Norman foundry, but he was no Philistine.

During his lifetime, St. Pope John Paul II was not known as a physically imposing figure, but the 21-foot tall, 7,000-pound bronze statue of the former Roman Catholic Church leader gives the religious leader the immense frame to match his impact on the faithful.

“This you can actually call monumental,” said Stephanie Enouen, assistant to the owner at The Crucible LLC, 110 E. Tonhawa St., in Norman, where the piece was constructed.

It was transported last month from Norman to Resurrection Catholic Cemetery in the heavily Polish Chicago suburb of Justice, where it was permanently installed.

In late 2013, Indiana sculptor Teresa Clark was commissioned by Catholic Cemeteries Archdiocese of Chicago to design the statue of the Poland-born pope.

Clark said Catholic cemeteries in Chicago are known for their beauty. Many are home to large and ornate mausoleums.

“They’re like museums. They’re full of artwork and such,” she said. “They do have a lot of statuary out, but not a lot that’s this big.”

Clark was in Oklahoma for the statue’s recent unveiling at the foundry before it was sent to Chicago. That week was the first time she had seen the completed piece in more than two years of planning and work, though she visited several times to oversee the process.

“That was impressive to see it all together,” she said. “I saw it when it was shoulders-down inside, but it still wasn’t totally solidly welded yet.”

It is the largest project Clark has taken on. She had it constructed at The Crucible because few other foundries in the country are able or willing to work on monuments this size.

A combination of wax shell casting and more intricate sand casting helped create the pieces to be welded together, ultimately forming the mammoth hollow likeness.

“We had to leave the head off of this statue while it was inside the shop and actually had to have the cranes come and take it out of the shop in order to place the head and weld it on top,” Enouen explained. “As you can see, it doesn’t fit through the door.”

As John Paul II casts his shadow over the foundry drive, it is easy to forget the project began with Clark’s small, handcrafted clay model.

“It’s interesting to me how much trust a sculptor has to have with their foundry because your finished piece, your clay piece, it’s going to get destroyed,” Enouen said. “The process is not friendly to keeping the clay intact.”

The Crucible is most known locally for constructing The Guardian monument that rests atop the state’s Capitol dome. That statue is 17 feet tall and required more than 4,000 pounds of bronze to produce.

The pope statue is the third large-scale monument the business has built in four months.

“We’ve got a big setup,” Enouen said. “A lot of foundries are smaller operations, but we’re really not afraid to tackle just about anything.”

When larger-than-life monuments aren’t outside to draw in curious onlookers, the building more easily blends in with its downtown Norman backdrop.

The Crucible is often contacted by artists from across the world.

“We’re actually better known as a foundry outside the state of Oklahoma than we are right here in Norman,” Enouen said. “I get people who walk in and say, ‘I’ve lived in Norman my whole life and didn’t even know you all were here.’”

Learn more about The Crucible at thecruciblellc.com.