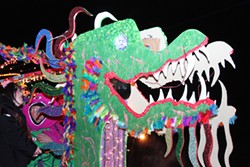 It’s Mardi Gras in a college town. It’s Norman’s only night parade of the year. It has a history dating back more than two decades. So why do some people call the state’s longest running Mardi Gras parade, starting 7 p.m. Saturday, “Norman’s best-kept secret”?

Aimee Rook, the parade’s coordinator, said there are a number of reasons the celebration has had a hard time establishing name recognition in Central Oklahoma, but she mostly thinks the Mardi Gras reputation precedes them.

“I do think some people in Norman think that it’s risqué because it’s Mardi Gras, but I don’t think they understand that even in New Orleans, there are 50 neighborhood parades that are just families, churches and people just having fun and being creative together,” she said. “It’s not all about debauchery.”

Regular turnover from the University of Oklahoma’s student body and a very limited advertising budget are also hurdles, but despite some limitations, the parade is still going strong, drawing crowds of as many as 5,000 in good weather.

Rook said there is no way she can control everything that goes on once the parade gets rolling. But for the most part, the Mardi Gras event is a grassroots, friendly neighborhood parade.

The things Rook can ensure are food and live music.

The parade starts at the railroad tracks near E. Main Street and S. Jones Avenue and travels down Main to S. Crawford Avenue and then south to E. Comanche Street before coming back up Jones and looping around the course again.

Music will be provided by a zydeco band and the Noble High School marching band, but Rook said other bands are highly encouraged to take part in the parade.

Rook admitted that some could have a hard time securing a trailer or float and added that the weather could be cold, but those obstacles shouldn’t be that hard for most musical acts to overcome.

“Honestly, when you roll down Main Street, all those people who rarely go out and listen to music or hear rock or jazz or zydeco, they’re never going to hear that [anywhere else],” she said.

The parade’s royalty selections this year include Stacey Wright and her niece Danielle Brown, key organizers in the Yes All Daughters campaign, a grassroots effort to address bullying and sexual violence in schools.

Rook, who also organizes Groovefest, does not represent any company or particular cause in putting together the parade. She views the event as a form of community art therapy, an opportunity to shake off the winter blues and work with friends and family on a creative project.

“We just want to have fun,” she said. “That’s really the point of the parade, to create some joy. We’re not raising money or saving the world, except maybe through art.”

Bands or others interested in entering the parade are encouraged to contact normanmardigrasparade@gmail.com by Thursday. Registration for a float is $20.16. Bands are not required to pay for registration.

Print Headline: Storied spectacle, Despite dating back to 1994, the Norman Mardi Gras Parade is still regarded as one of the city’s best-kept secrets.

Along E. Main and Commanche streets between S. Jones and Crawford avenues, Norman