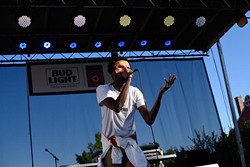 Some older or longtime Oklahoma fans might be asking themselves where the time has gone as they come to the realization that Norman Music Festival will celebrate its 10-year anniversary April 27-29 in downtown Norman.

Younger or newer fans, on the other hand, might be shocked the festival that is now an annual institution in the local music scene has not always existed.

Either way, 10 years is a significant milestone. Norman Music Festival 10 (NMFX) marks one decade by welcoming a pair of anticipated co-headliners, San Francisco garage rock band Thee Oh Sees and Washington, D.C., rapper Oddisee with his live band Good Company. A roster of more than 300 other acts and performers will join them, with more than 80 percent of those based in Oklahoma.

NMFX board president Quentin Bomgardner said the festival has come a long way from its first year as a one-day event to its massive three-day format. With that growth has come an expansion of its encompassing brand.

“Although we are named the Norman Music Festival and take place in Norman and started out as almost exclusively that, I think at this point we have become a celebration of original music in the state,” Bomgardner said.

Multiple reasons could be cited for the growth. A key contributing factor is that the festival has always been free to the public.

“We like that model,” Bomgardner said. “It works pretty well. The people who give us grants like it because it gives anyone the chance to access art.”

Another reason for the growth was a shift from the handpicking of performers by organizers.

“There was a point where we sort of made a choice on whether we should just open up and let bands apply or should we handpick them,” he said. “Everybody wanted to play, so by year three, we started doing the open call. We get 600-700 bands that apply every year.”

Through the open-call process, the festival began asking bands if they would be willing to play for free. Bomgardner is a former musician, and while he has played many free shows in the past, he said he hates asking others to do it. Still, the festival had a limited budget. Fortunately for organizers, Bomgarnder said between 80 and 90 percent of applicants said they were willing to perform just for the sake of it.

That willingness both greatly expanded the festival’s annual roster of talent and helped grow the festival to its current size. Last year, NMF was finally able to achieve its longtime goal of compensating every performing artist.

Each year, NMF is organized by a board of 15 volunteers. Last year, the fest was able to pay a part-time executive director for the first time. Director Shari Jackson’s position was increased to a 20-hour-per-week paid role for 2017.

Bomgardner said after a decade of putting the event together, he feels like organizers have hit a groove that should carry them far into the future.

“We’ve been able to catch our own rhythm, build a rainy-day fund and can hopefully build for the future,” he said.