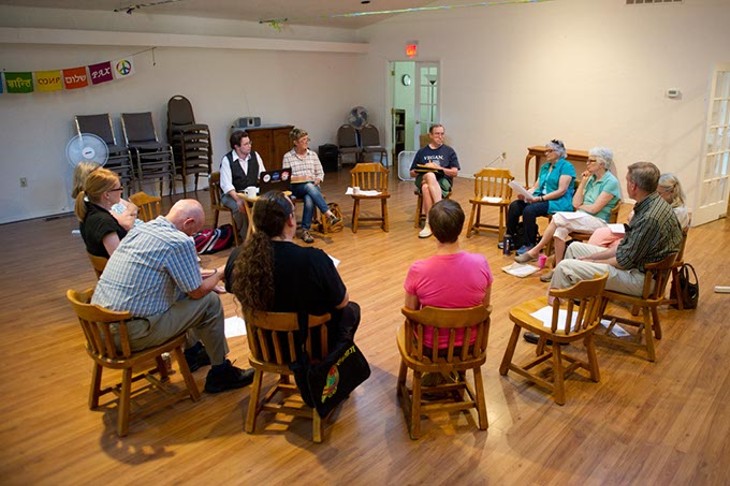 They formed a circle with wooden chairs. Charles Burnell opened the monthly meeting asking nearly a dozen guests to share what drew them to Norman United.

Many represent various churches: West Wind Unitarian Universalist Congregation, United Church of Norman United Church of Christ, University Quakers and Memorial Presbyterian Church. A few are current or former University of Oklahoma employees. One serves on the City of Norman’s Human Rights Commission, and another is involved in PFLAG Norman (Parents, Families and Friends of Lesbians and Gays). A few come from backgrounds in activism.

Several named concerns about the bevy of anti-LGBT laws proposed at the state level, challenging progress for lesbian, gay, bisexual and transgender citizens.

Some are gay. Some are straight. Some are transsexual. Some are bisexual. Each promotes the belief that all humans are of equal worth.

Together, they make up Norman United, a grassroots coalition established to help the City of Norman fulfill its promise as an inclusive community. Norman’s motto is “Building an Inclusive Community,” a prominent message on the city’s website.

For Norman United members, such a community protects residents from discrimination based on race, age, religion and gender as well as sexual orientation and gender identity. Since the first meeting on Oct. 17, 2014, the group has advocated for the city to amend its nondiscrimination ordinance to include LGBT protections. It was a lofty goal; however, 14 months after the first meeting, members celebrated as Norman City Council unanimously approved a resolution to extend the city’s civil rights protections to include LGBT residents.

Six months after the historic civil rights resolution passed, Norman United continues its work to ensure every LGBT resident or visitor is treated with the same fairness that every other resident of Norman experiences each day.

As West Wind Unitarian Universalist Congregation president, Burnell didn’t know what to expect when the church teamed up with a few other Norman churches to host a public partial screening and discussion of the Broken Heart Land documentary during LGBT History Month in October 2014.

Thirty community members watched the film explore the tragic death of a Norman teen who committed suicide one week after attending a city council meeting in support of a proposal for LGBT Month.

The roundtable discussion touched on numerous studies that show LGBT youths are at an increased risk for suicidal thoughts and behaviors, suicide attempts and suicide. As discussion continued, crowd members touched on other troublesome trends, such as the lack of protections for members of Norman’s LGBT community.

“Although you can get married, you can still be fired or evicted depending on relationship status and gender identity,” Burnell said. “We wanted to establish protections in Norman.”

Rev. Dwight Welch of the United Church of Norman attended that first meeting. Welch was new to Norman and encouraged by the churches and faith groups represented at the event. He also noted that community groups focused on LGBT issues attended.

“It became something broader than the churches,” Welch said. “It became, How could we connect all the organizations and work towards the same goals?”

At the end of the discussion, Norman United formed with an emphasis toward amending the city’s nondiscrimination ordinance. Coalition members gathered the first Tuesday of each month at West Wind to share about meetings with public officials and plans for pursuing their goal.

“During our presentation to the mayor, we had people speak up,” Burnell said. “It takes a lot of courage for someone to stand up and share how they’ve been marginalized and the effect it had.”

Two months later, Norman Human Rights Commission voted unanimously for the city’s attorney to brief the city council on adding protections for LGBT residents. The vote cleared the way to draft the resolution, which passed Dec. 22.

The resolution continues as a major topic among the coalition members. Resolutions are typically used in local government to express a policy or position. However, an ordinance holds greater regulatory capacity than a resolution, as a municipal ordinance is a law.

Serving in a watchdog role, Norman United members monitor the city’s response to the resolution. Members ensured the resolution posted to the city’s website and reviewed the city’s discrimination complaint form, which was last updated in 1997.

Coalition members attend human rights commission and city council meetings and look for ways to advocate for the LGBT community in policy as well as ongoing city projects, such as the half-cent sales tax generating a handful of new capital improvement projects.

The coalition continues to promote amending the anti-discrimination ordinance. Burnell believes revising the ordinance would benefit LGBT residents and other minority groups.

Currently, Norman United is drafting a plan for a fall symposium, an opportunity for the community to learn more about lesbian, gay, bisexual and transgender people and their related issues. The target audience includes ministers, teachers, counselors, human resource professionals and health care providers, and the symposium will present an overview of the efforts to extend LGBT inclusions as well as discuss unmet needs of the community.

Welch aspires for Norman United to become a group ready to assist and direct LGBT community members to other support organizations and groups in Norman. The movement’s supporting allies include PFLAG Norman, Queer Inclusion on Campus at OU, The Welcoming Project and Ending Violence Everywhere (EVE) Coalition.

“Some people think they are alone,” Welch said. “[However,] once they go to a meeting, they will see there is a community right here.”

Burnell sees the group playing a role in helping LGBT residents but also reaching the “individuals they interact with.”

As an organization with LGBT community members and their allies, Norman United looks to educate on issues affecting the LGBT community, work toward understanding and build an inclusive community.

Successful passage of civil rights protections fuels the Norman United movement. But at the monthly meetings, the drive of the coalition members to see everybody treated equally with dignity is what pushes the coalition forward.

“I really hope we haven’t had our best moment,” Burnell said.