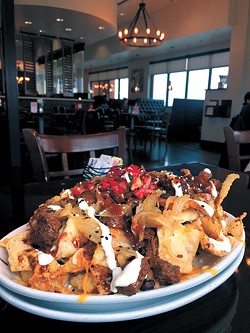 The vestiges of colonialism and natural immigration have created accidental fusion cuisine for centuries; look no further than the plethora of Vietnamese banh mi available in Oklahoma City. Curry vindaloo is a popular dish on many Indian restaurants, but the dish is a conglomeration of Portuguese cooking and the cuisine of Goa, the smallest state in India that was under Portugal’s rule for 450 years.

Norman’s El Toro Chino Latin + Asian Kitchen owner Gerry Reardon — a southern California native — lived in Guadalajara, Mexico, for a few years, where he was exposed to the city’s Chinese population and the natural blending of Latin and Chinese food. It left a kernel of inspiration when he returned home.

In a modern sense, California is at the forefront of fusion cuisine, but its history goes much deeper than credit that is attributed to celebrity chef Wolfgang Puck. His second Los Angeles-area restaurant, Chinois on Main, opened in 1983 with dishes like barbecue chicken pizza and other items melding Chinese, Korean and Thai flavors.

Contemporary California fusion cuisine can actually be traced to the small San Joaquin Valley town of Hanford, where the family-owned Imperial Dynasty was an anchor of the town’s Chinatown for 123 years, as highlighted by National Public Radio (NPR) in 2006. Opened in 1883, Imperial Dynasty operated as a traditional Chinese noodle shop until founder Shu Wing Gong’s grandson Richard Wing enlisted in the U.S. Army in 1945.

Wing returned to Hanford in 1958 and transformed Imperial Dynasty. It was no longer a strict Chinese restaurant — only egg fu yung remained on the menu.  People flocked to the tiny farming community to try Wing’s version of poached salmon, Cornish game hen and French-inspired escargot.

Imperial Dynasty closed its doors in 2006 as Wing battled health problems and the family’s younger generation had no interest in entering the food business.

Wing died in 2010 at the age of 89 at a time when the ubiquity of social media made possible the rise of food trucks. Users could easily chase down the mobile eateries, and perhaps no truck gained a bigger following than Los Angeles’ Kogi Korean BBQ, as users followed the truck all over the city for burritos, quesadillas and tacos filled with Korean-inspired meats and sauces.

As the popularity of Latin and Asian fusion began to rise in the United States, Gerry Reardon and his wife Jennifer began devising a hypothetical menu that would pay homage to Gerry Reardon’s time in Mexico, should the opportunity ever arise.

The couple from southern California moved to Oklahoma in 2006 after years of visiting Jennifer Reardon’s brother Kenny Gajewski, a pitcher on the 1994 University of Oklahoma national champion baseball team and current head coach of the Oklahoma State University softball team.

“We came out here and really liked Oklahoma and the idea of raising our family here,” Gerry Reardon said. “We like the people, values and everything about it.”

Gerry Reardon, a lifelong devotee to the restaurant industry, got a job at Edmond’s Café 501 and Jennifer Reardon became catering manager for Norman’s Benvenuti’s Ristorante.

The Reardons partnered with Scott and Kathleen Shuler to open El Toro Chino (“the Chinese bull” in Spanish) at 2801 36th Ave. NW in Norman, just off of Tecumseh Road, in Nov. 2016.

“We wanted to bring something new to Oklahoma, and Norman in particular,” Reardon said.

The menu at El Toro Chino varies between lunch, dinner and brunch. The lunch menu is set up to expedite service for customers on the go, Reardon said. Combinations like the spicy rooster ($11) with grilled chicken, peanut sauce, cilantro rice, avocado edamame, fried jalapeños, seasoned jicama, julienned squash and Sriracha can be ordered in a wrap or a bowl.

Customers can also choose between three sandwiches — their take on a classic Cuban is the most popular — salads, and soups. Customers can build their own bowl or wrap by pairing Latin inspired carnitas, shrimp or tilapia and salmon or Asian-inspired skirt steak in hoisin Korean barbecue sauce and grilled chicken in peanut sauce with a variety of rice and vegetables.

The dinner menu is a little more refined as the sous-vide pork tenderloin ($19) is served with peanut sauce, jalapeño-bacon mashed potatoes and grilled asparagus. The shrimp empanada ($19) is another popular dinner item, and for good reason. The masa-filled pocket is topped with citrus sour cream and a tomato-onion sauce.

By far, the most popular item on El Toro Chino’s menu is the fusion nachos, which best represent the ethos of the restaurant, Reardon said. I think they might’ve stumbled onto something really inspired by swapping tortilla chips for crispy wonton chips, which are light and slightly sweet but maintain integral strength under a mound of Korean barbecue-inspired skirt steak, black beans, jack cheese, caramelized onions, sesame seeds and pico de gallo.

As fun as I thought the dish to be, ultimately, I found the skirt steak to be a huge disappointment. It was tough, and the lingering marinade gave me flashbacks of eating teriyaki-flavored beef jerky.

I opted for The Happy Piggy in a bowl ($10), which is slow-roasted carnitas over Hawaiian bacon-Sriracha fried rice, mashed pinto beans, pickled onion, fresh spinach and corn. The carnitas were really good and made up for the disappointing skirt steak, but I regretted ordering the bacon fried rice when I saw it swimming in a pool of grease at the bottom on the bowl, which I assume came from the carnitas and its own bacon. The smokiness and grease of the bacon dominated the dish, and I was happy that I didn’t order in a wrap because it would’ve been a grease nightmare. The lunch special that afternoon is what I assume is a pared-down version of its shredded chicken taco platter on the dinner menu. I ordered the taco platter hoping it would be chicken served with peanut sauce to get a true fusion taste, but instead found it covered in a bland tomatillo sauce that was sloppily covered in lettuce and too much sour cream.

I was impressed with attentive service and chic décor inside El Toro Chino and disappointed with the subtly of the fusion experiment. The skirt steak needed to be cooked quickly on high heat to gain the benefit of caramelizing without becoming tough, and the Hawaiian bacon fried rice works better as a side item than at the bottom of a bowl.

El Toro Chino is onto something fun and interesting, but it didn’t land with me.

What works: Wanton chips are a great replacement for the tortilla variety.

What needs work: The skirt steak was overcooked.

Tip: Opt for a non-greasy rice at the bottom of the bowl.