Never trust someone who says he doesn’t like grits.

“A bowl of creamy, buttery, delicious grits? No thanks, friend. But let me tell you about this neat cult I just founded.”

Next thing you know, you’re shaving your eyebrows, signing over all your earthly possessions and living on a commune with people who talk about having “kind eyes.”

That’s as good a reason as any for you to take all potential friends to Jax Soul Kitchen, 525 S. University Blvd., in Norman to test their resolve against the Soul Pie ($10).

If they eat a bite of this Creole take on shepherd’s pie, with pulled pork and jambalaya baked under a layer of cheesy grits, without smiling, you’ll know they’re up to no good. 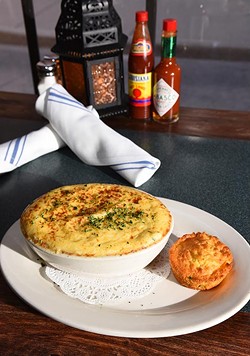 It is nearly impossible to not have a physical, shiver-down-your-spine reaction to this dish.

The pork is tender and fatty, and the jambalaya, which is fine on its own, adds a juiciness and spice to the proceedings. But the grits — good lord, those grits — they tie it all together, giving each bite a smooth, mildly sweet base for all those savory flavors to play off.

How I got out of Jax without trying the shrimp and grits, I am not sure. That low-country staple has been flourishing across the metro, and it’s one of my favorites. Certainly, I will remedy this oversight in the near future.

As a sampler goes, the Creole trois ($12) was two-thirds good and one-third gumbo. 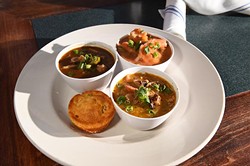 Maybe it was just an off day for the gumbo ($11 for a bowl), but the thin seafood stew had an unpleasant bitterness, possibly from a burned roux. That’s a dish I saw mentioned positively online in connection to Jax, so I’m hoping my experience was an outlier.

The étouffée was creamier and had a buttery thickness with perfectly cooked shrimp. Usually seen made with crawfish, this version of étouffée walks a fine line by keeping the sturdier shrimp from getting chewy.

There’s plenty of hot sauce on the table if you want to crank up the heat, but I’d like to see the kitchen amp up the spice a little. Hot sauce packs a punch, but slow-cooked spice can build slowly and leave your mouth tingling pleasantly throughout the meal.

The jambalaya, heavy with chicken, andouille and pork, was filling and fatty in the best of ways. That’s the magic of andouille sausage — it’s packed full of spicy fat that renders deliciously into broth, making it more substantial. Jax uses a fairly mild sausage for this, so anyone allergic to too much heat shouldn’t be scared off.

The spicy fisherman’s stew ($10) is a play on a cioppino. The thin, red broth had good tomato flavor, but the spiciness was a little one-note.

The taste of the catfish seemed to dominate the scallops and shrimp, which was a little disappointing. I could see ordering this on a very chilly day, but it didn’t stand out nearly as much as the étouffée in depth of flavor.

It’s a wonder there was any room for these dishes after the waiter dropped off a massive plate of loaded fries ($10) at the table.

Potatoes are cheap, but maybe prices have fallen as low as oil, because this was a truly impressive amount of tubers.

Hidden among the crispy planks of potato are chunks of andouille, chicken and pork under a slathering of melted cheese.

This isn’t an appetizer for two; it’s a meal. It might be the biggest value on the menu for college kids looking to fill their bellies with delicious Creole flavors before spending the rest of their meager allowances on Jax’s impressive list of beers and cocktails.

As one of the Good Life Dining Group restaurants, along with Blackbird Gastropub and Blu Fine Wine & Food, Jax has a pedigree for great bar service.

That might explain the bevy of heavy sides for $4. Beans & rice, sweet potato smash and dirty rice all look like great options for a quick and easy meal for those not burdened by full wallets.

But anyone who is looking for something more substantial might check out the po’boy menu. The classic fried catfish po’boy ($9) came with a mountain of coleslaw and a choice of side. The catfish itself was fried well and retained good moisture, but the flavor wasn’t pronounced.

You should slather on some of the accompanying remoulade sauce, which did pack a decent amount of spice.

Jax Soul Kitchen is still pretty young, but staying open more than a year in a city like Norman, in which restaurant turnover can happen in the blink of an eye, is impressive.

Better still, it seems like Good Life Dining Group has established a winning formula for opening new concepts. If the quality of the food tends more toward the Soul Pie, it’s a fair bet Jax could become a Norman staple in no time.

What works: Soul Pie is proof of a loving creator.

Tip: Check out the sofas in back if you’re just there to drink and hang out.