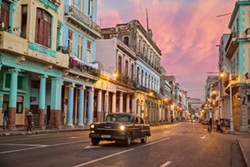 Who is an artist, and what is art? Such questions have preoccupied artists and critics for centuries, but they find an answer in Undercover Artists, a new workshop series by Norman Arts Council (NAC). And that answer is everyone.

Created by a programs committee at NAC, the premise of Undercover Artists is that an artist lurks inside all of us — it just might take some coaxing to unleash creative potential.

Norman-based photographer Shevaun Williams leads the next Undercover Artists workshop 9 a.m.-2 p.m. June 24 at Mainsite Contemporary Art, 122 E. Main St., in Norman. Capped at 12 attendees, the session includes a light lunch. Guests should bring a camera (or phone) and laptop with photo editing capabilities and know how to transfer photos between the two. Tickets are $25 per person. Visit normanarts.org to register.

In an era of increasing access to create and view art, the distinction between someone who enjoys making art and an ‘artist’ continues; this dichotomy informed the creation of the Undercover Artists series, according to Cher Duncan, events coordinator and programs assistant at NAC.

Duncan, who is in charge of the workshop series, said that the programs committee found inspiration from one of its members, Mariann Lawson, who recounted her mother’s ability to knit.

“Her mother had this fantastic gift to create art,” Duncan said, “but would have never referred to herself as an artist.”

Inspired by Lawson’s mother and her pursuit of artistry, the committee decided to create Undercover Artists as a way to foster a sense of creative exploration for beginners as well as experienced artists. The workshops focus on everyone’s capacity for creativity instead of their previous hours of training.

“We all have artistic abilities, and some of us are a little intimidated by displaying or showing off those skills, thinking that we’ve never been professionally taught or that we don’t have an art degree,” Duncan said.

The committee decided that local artists in Norman would lead the workshops with the goal of increasing confidence and creating more artists among attendees.

In February, artist Enoch Kelly Haney kicked off the Undercover Artists series with a workshop about sculpting in clay.

Shevaun Williams’ workshop, the second of the series, will provide an overview of the entire photographic process, beginning with technical specifications about cameras and editing apps. After learning about image capturing and photography basics, workshop attendees will take a walking trip through downtown Norman in order to experiment and take pictures. The group will reconvene at Mainsite for photo selection, editing and critique.

Williams, who has had her studio, Shevaun Williams & Associates, in Norman for about 20 years, became seriously interested in photography when she was in college at the University of Oklahoma.

After spending a summer abroad in France, taking pictures, Williams said she fell in love with photography. At the time, she was a languages major, learning French, German and Russian, but the signs of her infatuation with photography had already appeared.

“I was always the one with the Instamatic camera, taking pictures of my girlfriends,” Williams said.

When she returned from her summer, she said she quit school and went to work and her life took a different path than she had imagined it would.

On that path, Williams has continued to fuse her mutual love of travel and photography, looking through her lens to capture the sights, scenes and people from all over the world, from Cuba and London to Paris, Morocco and South Africa.

Williams’ breadth of work also includes fashion editorial spreads, a photographic examination of movement and athleticism and a documentation of The Russell School in Zambia.

When her neighbors at NAC contacted her about leading one of the Undercover Artists workshops, Williams said she thought it was a great idea.

“People are always wanting to take better photographs, especially in this day and age, since everyone’s carrying a camera in their pocket,” Williams said.

She considers ease of access and enjoyment as two of the main factors for photography’s increased ubiquity.

“Is there anything more fun than taking pictures?” she asked.

For Williams, the advent of smartphone and DSLR photography and its corresponding social media presence also means that content is always highlighted, sometimes at the expense of compositional and structural knowledge.

“The story you’re telling is important, but the content is reinforced by technical execution,” Williams said. “And if you know a little bit more about your camera … then you’re just going to take better pictures.”

Williams’ Undercover Artists workshop will aim to address photographers’ familiarity with their cameras. Attendees will learn about technical details, such as seeing the entire frame — quarter to quarter and top to bottom — in order to take better photos, Williams said.

A would-be photographer who lacks technical knowledge is like a painter who doesn’t know what different brushes do.

“If you know the rules, you can break the rules with forethought, intentionally, and come out with a better product,” Williams said.

The workshop will also focus on avoiding what Williams calls the “postcard image” and instead help people take more nuanced, unique pictures that ring true to the photographer.

One of Williams’ goals for the workshop is to replicate an experience she once had at a workshop where an attendee described a personal revelation after discovering the camera’s foot switch.

Williams said she hopes workshop attendees have a similar moment — whether small and technical or large and revolutionary — that shifts their perspective.

Artist Skip Hill will lead the next Undercover Artists session in September. While the exact date and time for Hill’s workshop are still being worked out, Duncan said he will focus on mixed media collage.

NAC plans to host a few workshops in 2017 and then gauge action for the future. After only one workshop, Duncan said reception has been positive, with some attendees traveling from Choctaw and Shawnee for Haney’s session.

“It is definitely something we would like to see continue,” Duncan said.