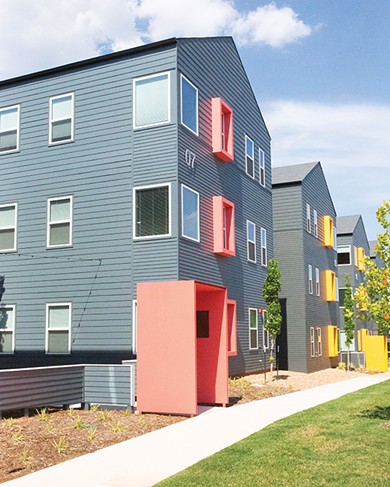 “There will be four buildings that’ll contain 114 units,” Bradshaw said. “There will be outdoor amenities for patios and covered areas. There will be a fitness facility in this third phase. There are two commercial locations that we’re having discussions with, a possible bookstore that might be there as well as a restaurant.”

“It’s lower pricing for that workforce segment, and there’s no difference in the housing. … That kind of goes along with our philosophy that this is not a project; this is a neighborhood. We’re building a neighborhood that is diverse. We just had a picnic cookout for all the tenants and the neighbors, and that kind of thing will continue,” Bradshaw said. “We try to do outreach to our neighbors and be mindful of them in what we’re developing and encourage all sorts of people to live there. This isn’t really gentrification; I don’t see that happening here. We’re really building it with a lot of help from the Urban Renewal Authority and the City of Oklahoma City and my investor group. We’re building what we think is something different and developing it into a neighborhood that is very inclusive.”

The four new buildings will be constructed west of the former school between High Avenue and Kelley Avenue and between NE Sixth Street and NE Fourth Street. High Avenue will be extended to connect Sixth Street with Fourth Street. NE Fifth Street will also be extended to connect Stonewall Avenue with Kelley Avenue. Bradshaw said those streets will be further developed with streetlights, landscaping and sidewalks and will provide better access and more parking spots.

“We’re in the final processes of closing, so we think we’ll be started in the first part of August,” Bradshaw said. “The four buildings will be opened in phases so that we’ll have some of them that will open [next] June, July, August and October.”

Bradshaw expects phase three to be completed by the end of October 2020.

The first phase of development was completed nearly two years ago and included redeveloping the former Douglass High School building — now known as The Douglass at Page Woodson — into 60 affordable housing units. It also included constructing an adjacent building, The Douglass Next Door, to create 68 more units for rent.

“We bought the Page Woodson school that had been vacant for about 20 — almost 25 — years, and we converted it to residential rental housing and redid the theater and commercial space that is primarily occupied by nonprofits,” Bradshaw said. “All 128 units are built and operated as affordable housing, which means to qualify, you cannot make more than 60 percent of the median income. It’s now over 90 percent occupied and stays that way, and all of the commercial spaces are leased.” 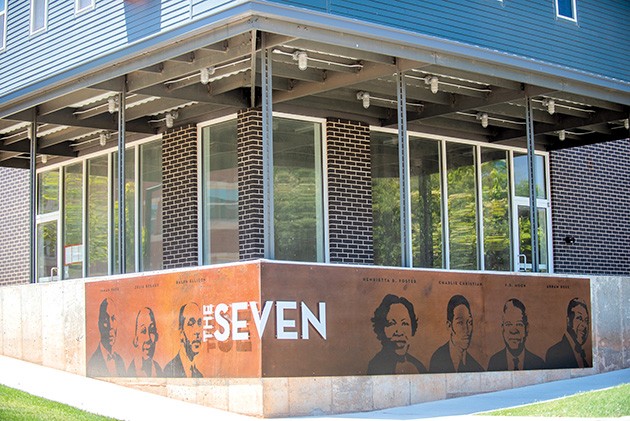 “There are seven courtyards that you use to gain entrance into each building, and each of those seven courtyards in The Seven are named for seven African American individuals that were selected by the neighborhood association to be commemorated,” Bradshaw said. “That also has a coffee shop that was part of that development that has been leased. They’re doing their tenant finish work now and will open soon.”

The entire Page Woodson area is about one mile from University of Oklahoma Health Sciences Center (OUHSC), which serves roughly 4,000 students and employs thousands more. Bradshaw said that while a majority of market-rate apartment residents work at OUHSC, they have a diverse group of residents at the three current apartment sections.

“To us, it’s validated our thoughts that there was a demand for housing — not only around the Health Science Center, but in that market — with the speed at which they leased up and the interest that continues to be shown,” he said. “It’s a diverse group of tenants from students to some professors to people that work at Boeing and nurses.”

When Bradshaw’s team bought the school, he said a large section of the local community felt like they had ownership of the building.

“We continue to try to be respectful of the neighborhood and reach out. Sometimes there’s difficulties because, at the same time, I have investors that put equity in this and have to get a return, so it’s a business,” Bradshaw said. “It’s not just something where you get all government money. We are a business, so we have to run it that way, but we try to be open and transparent. … We’re not promising anything; we’re just telling people what we can do and what we can’t do and be respectful of their feelings. I know we don’t do that all the time, but we do our best at that and we’ll continue to do our best.”’

A fourth and fifth phase with about 100 units each are expected to take place after phase three is completed. Depending on demand, Bradshaw said the next part of the development could encompass both phases.