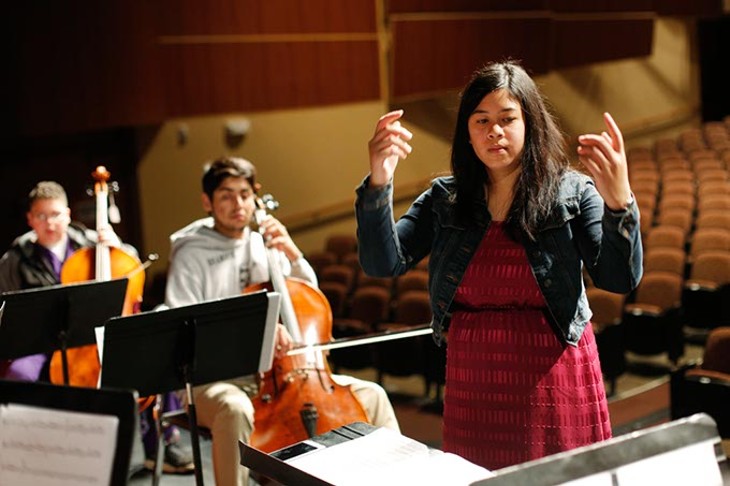 Sam Sy’s hands floated through the air as she conducted the Northwest Classen High School orchestra during an early morning practice. The piece, a version of “Dust in the Wind” by the band Kansas, sounded nearly perfect to the untrained ear, but Sy’s eyes darted sharply toward the violins.

“Stop,” she said, then asked a student to hand her an instrument so she could demonstrate the sound she wanted.

“This is what I am looking for,” she said before returning the violin.

It was first periord on a Friday late in the school year, a combination that can lend itself to inattentive students. But Sy demands — and receives — focus.

Sy arrived at Northwest Classen fresh out of college four years ago to find an orchestra program with eight students, not nearly enough to qualify for most competitions. But Sy believed orchestra could be a meaningful program for more students in this urban school, so she challenged them to raise their expectations. As a result, class sizes grew.

“It was very shocking,” Sy said about finding such a small program in her first year. “But you just do the best you can, and my hope was that I could build something that was meaningful for the students. I guess I have.”

Her second year saw 20 students and a few more her third year. Now, the program tops 30 with more expected next year. Northwest Classen’s orchestra program also has found success at competitions, including top honors at

Heartland Music Festival last year and a silver rating at a national contest in St. Louis earlier this year, a trip that was made possible by a grant from The Awesome Foundation.

“I think we have been kind of an underdog for so long and we see groups that are better than us that inspired us to work harder,” said Nate Bullock, a junior who plays viola. “If you compare our music from two years ago to now, it is completely different, and that’s because of the way [Sy] pushes and challenges us.”

While more affluent schools might enjoy larger orchestra programs with students who are able to afford to rent or purchase top-of-the-line instruments, Northwest Classen makes do with instruments owned by the school, many of which are in need of replacement.

Sy admits better instruments would improve the orchestra’s sound, but it’s not a valid excuse for judges at competition, and she doesn’t use it as one for her students.

“We just have to work even harder for it,” Sy said. 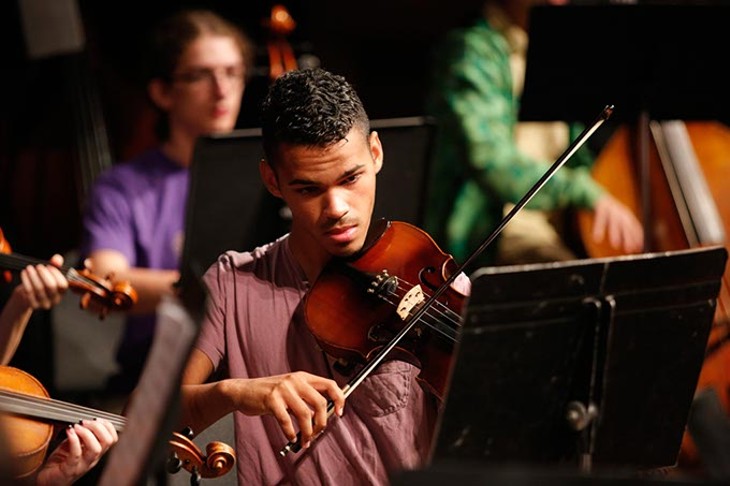 What Sy’s students lack in new instruments and funding they make up for with hard work that is easier to tap into than it might be in another school.

“These kids are fighters,” Sy said. “These kids know what it means to face a challenge and sometimes have to handle it on their own. A school our size might normally have 40 or 50 kids, and that might allow some students to hide and go unnoticed if they don’t know their music. But here, you can’t hide. Every student has to know their work and do it. We all rely on one another.”

Sy is tough but not callous. Her students demonstrate a fondness for her that goes beyond her skills as a teacher.

“I will pick them up for school, take them home and do what I can for them,” Sy said. “They know I will provide for them and push them.”

Edward Chehab, a senior violin player, said his experience in orchestra has taught him a lot about what he is capable of.

“It teaches me a lot about myself, about knowing I’m adequate and knowing myself more,” Chehab said. “Every time we go to contest ... I learn how to be prepared, be professional and give it your all.”

Near the end of the morning rehearsal, Sy paused before conducting the orchestra into action. She waited for complete silence and attention and then dropped her hand as if pushing play on a music player. As the performance entered the stretch where Sy had earlier called out the violin section, she looked at that section and a smile grew on her face as she heard the sound expected.

The song came to an end, and Sy said, “Nice job,” a small compliment that resulted in big smiles from the handful of violin players.

“These students have all the skills it takes,” said Sy, speaking about more than just playing an instrument. “They have everything it takes; they just needed someone to show them they could.”