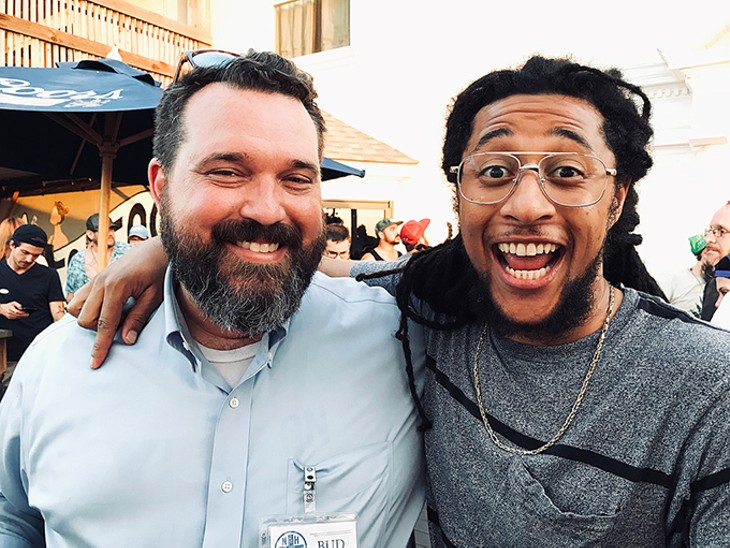 When Yes on 788 officially declared victory on election night, a joyful cheer rang throughout 51st Street Speakeasy, where hundreds gathered indoors and out for an official watch party.

It is appropriate that victory on the medical marijuana state question would be declared inside a bar taking inspiration from the speakeasy drinking establishments that popped up during the United States’ Prohibition era. June 26’s historic results promised an end to restrictions of another kind.

Local rapper and visual artist Mike Huckeby, also known as Huckwheat of the Sativa Prophets hip-hop collective, was one of many people who showed up at Speakeasy to watch the results roll in. Huckeby and the Sativa Prophets group have been vocal supporters of SQ788 and its get-out-the-vote efforts. They played an election awareness concert the Saturday before election night at Speakeasy.

Huckeby said the victory and the new industry medical marijuana brings into the state should be seen as an enticing opportunity for entrepreneurial-minded Oklahomans. He wryly suggested a new taxi app for users to call on when they are too high to drive.

SQ788 passed with 56.84 percent of the vote. More than 506,000 ‘yes’ votes were cast for the measure. Oklahoma is the 30th state to legalize medicinal marijuana — something Huckeby said he is proud of.

“The fact that we’re not last, that’s a big thing to me,” he said

Huckeby’s criticism of 788 opposition comes at least partially framed within the context of opioid and prescription drug overdose deaths. He said it is hard to take arguments about the threat of marijuana seriously when it is a drug that has never had a reported overdose death (a fact supported by the U.S. Drug Enforcement Administration). Any earnest discussion on addiction to pain medicines, he said, should at least mention the availability of cannabis as an alternative.

“If you’re not going to legalize bud, then you’re not talking about everything,” he said.

Huckeby was thrilled with not just the result, but with the high turnout in general.

“It makes me feel more confident about the direction of Oklahoma as a whole,” he said.

As it became clear on election night that the 788 ‘yes’ votes had built up an insurmountable lead, friends Drew House and Blake Dowell reflected on the oppositional arguments they heard against the state question, which they called “hilarious.”

“To us, it was like Reefer Madness,” House said.

House and Dowell said they have been following 788 closely for months. House has plans to eventually enter the state’s fledgling marijuana industry as a grower. He believes that some of the people arguing against the state question were motivated by ties to industries that could be affected by legalization, such as pharmaceutical companies and for-profit prisons. House said most opposition claims did not seem to be rooted in fact.

“With someone arguing for it, there’s passion, there’s research,” he said. “At the end of the day, there’s no research for [the opposition] to run to. Show me the bodies — who’s died from this?”

Dowell said international studies on the medical and pain-management benefits of cannabis can be easily found online, even if U.S.-backed research is lacking. House called 788 opponents motivated by their own financial gain selfish.

“There’s really no logical reason to be against it,” he said.

Dowell wonders whether people campaigning against 788 were entirely convinced of the side they were on.

“It seemed like they didn’t have confidence in the information they were putting out,” Dowell said. “The people who were on the pro- side, they verbalized their arguments better.”

"That was simply our deal, just an awareness campaign." — Jed Green tweet this

When Yes on 788 director Jed Green was not keeping close tabs on 788 voting tallies during the Speakeasy watch party, he was giving on-camera spot interviews to local media. The evening was as frantic as it was joyous. Green was pleased with the results but restrained his revelry, knowing there was still work to do to fine-tune the measure’s details.

Green said Yes on 788 knew it would face opposition with much more funding than their own campaign had to offer. Instead of fighting money with money, Yes on 788 focused all of its attention to get-out-the-vote efforts.

“We knew if we expanded the electorate — which we did effectively, doubling the historical precedent and breaking records — that we would move enough bodies to simply overwhelm the opposition,” Green said.

Green said the campaign considered analytical voter data, which was helpful, but ultimately not a determining factor in their ability to achieve victory.

“We know where the data road ends and it just becomes a map,” he said. “It allows us to target the folks we want, but one of the things about it is that you cannot run a simply data-driven campaign. Literally, you just kick back to 1950s tactics, and that’s what we did.”

Green said Yes on 788 dropped literature off at every door in 60 voter precincts within Oklahoma County. They also made around 750,000 phone calls to voters in four months of campaigning. Everything they did, Green said, was focused on awareness. T-shirts, yard signs and social media posts always had the primary vote date listed.

“One of the reasons you have low turnout in primaries is that folks are just not aware of what those elections are,” he said. “That was simply our deal, just an awareness campaign.”

Green feels that the ‘yes’ vote’s status as a true grassroots campaign gave it an advantage over the highly funded opposition: fervent, passionate voters determined to show up in bulk.

Green said he plans on closely working with Oklahoma Health Department to chisel out 788’s implementation framework. He also wants to guard against attempted changes to the state question’s original intent when the legislative session begins next year.

“We do expect [lawmakers] to tinker,” he said. “We’re pushing them to tinker, and we’re in there tinkering with them and making sure the ultimate goal is to preserve the spirit of 788 and do as little to it as possible to make sure it is actually a functional system, not just immediately, but for the long haul.”

Oklahomans for Health co-founder Chip Paul said it is big for the state not just that the state question was passed, but that it was passed with relatively little financial backing compared to the opposition.

“I think it speaks volumes for the people of Oklahoma, the unity we created, the grassroots movement we created, and it is a powerful thing,” Paul said. “I think it freaks out the powers that be a little bit because it’s we the people rising up and saying, ‘We want this.’ It’s kind of a cool thing.”

While Oklahoma does not have  a reputation as a progressive state, Green said those who voted ‘yes’ should be proud of what they have accomplished, no matter which side of the political spectrum they normally align themselves.

“I think it’s part of a larger social movement that includes education and criminal justice reform,” he said. “What it basically says is that there are issues where, if you strip away the partisan labels, you find 60-65 percent support for a wide variety of issues.”

A lot of doubters wrote off the possibility of Oklahoma approving medicinal marijuana. But Green said it might be time to rethink what the state is capable of.

“The reality is that it’s a whole lot more nuanced than that,” he said. “Oklahoma is a lot more complex than what a lot of people think.”

"That was simply our deal, just an awareness campaign." — Jed Green tweet this