In the punk scene spanning 1980-1990, young, mostly unskilled youth picked up instruments and proceeded to destroy everything they knew about rock 'n' roll.

These bands didn't care because it didn't occur to most of them that anyone else gave a shit about anything they did.

The film was written and directed by music journalist Scott Crawford and executed with success in large part through the lens of D.C. native photographer and director of photography Jim Saah.

From straight-edge to homicidal, many viewers will relate to punk’s cut-and-paste fanzine culture — recording split albums with local bands and trimming album covers with scissors before placing them in the cassette holders. These kids created and nurtured a scene that helped define and guide not only musical tastes but ways of living that still thrive today.

Now middle-aged, the musicians talk about their current and former bands in realistic ways. They mostly sucked (because they did, whether we loved or hated them), their skills were nominal, they were loud, they were fearless, they were largely oblivious to outside influences and they gave a shit about social and political issues and each other.

The film screens at selected theaters and locations nationwide through June. Visit saladdaysdc.com for dates, locations and updates. 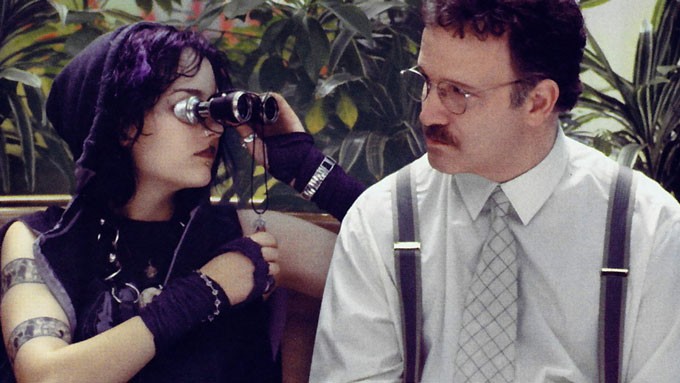 Jennifer, a sullen, soot-eyed, combat boot-wearing teen, needs a job. Like any other rational teen, she sighs and accepts that she'll have to go to the mall to find it.

Seventeen-year-old Jennifer, aka “J” (Leelee Sobieski, Night Train, Finding Bliss), clomps herself into the path of a much older man — 49-year-old Randall (Albert Brooks, Terms of Endearment, A Most Violent Year) — when she asks the conservative, menswear store manager to hire her.

J proves both a dreamer and a cynic. She self-harms and lacks boundaries. She's anxious. Alternatively, he's bored and passive. Both she and Randall are lonely. Their outlier statuses become their bond.

This film is honest and at times uncomfortable, but it is always relatable. J is awkward, both in her budding sexuality and in bluntness of affect and in speech.

“I’d like to propose a toast to all the special f-words — to friends, family, fate, forgiveness and forever,” J says.

J and Randall teach each other that friendship, attraction, curiosity and love can coexist without self-destruction.

As their hearts soften, so does Jennifer. The rigid lines — all-black attire, eyeliner, hair and lipstick — and brusque demeanor gradually morph into a laughing, open, thoughtful young woman.

The pair's unfolding quasi love affair is an intellectual primer for both as each moves into other life phases.

J and Randall prove that vital self-discoveries happen at all ages. They happen when people are brave enough to let things happen — even at the mall.