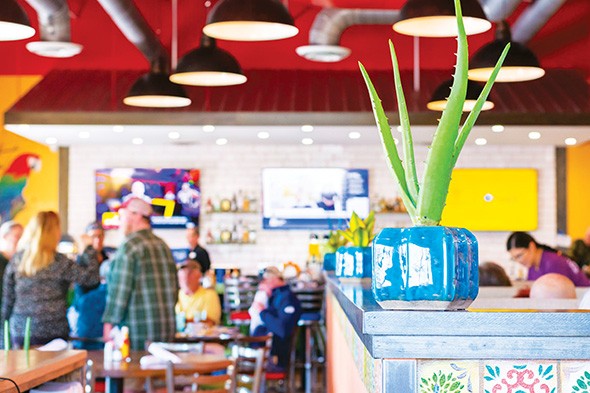 Hal Smith Restaurants has hit its stride with breakfast concepts. First, Neighborhood JA.M. became a breakout in north Oklahoma City and Norman — with a third location under construction in Midtown — and now, El Huevo Mexi-Diner in Norman is strengthening its early morning and lunch offerings.

Located at 3522 24th Ave NW, just off Tecumseh Road, El Huevo is a concept introduced by the restaurant group’s namesake and founder. According to operating manager Tanner Nickell, Smith wanted to pursue a “Mexi-diner” and commissioned several veteran members to develop the concept.

Nickell has worked for Hal Smith Restaurants since 2010, most recently as a manager at a few Louie’s Grill & Bar locations, and was tapped to run the store.

“We have gotten a great reception from our guests,” Nickell said. “This is a combination of a lot of people’s favorite dishes.”

He said the restaurant’s most popular dish is far and away the Hangover Burrito, and it’s easy to see why. It’s a meat-lover’s dream. Scrambled eggs, bacon, chorizo and breakfast sauce are combined with black beans and cheddar jack in a tortilla topped with queso blanco, ranchero sauce, queso fresco and cilantro with a side of Mexi potatoes.

"I think El Huevo could expand its
offerings by trying some specials first
and seeing what sticks." tweet this

The last popular item on the menu that Nickell mentioned to me is the Crunchy French Toast. The cornflake-crusted Cuban toast is drizzled with Mexican chocolate and served with caramelized bananas and fresh fruit. The dish sounds like a real winner to me, and I’ve seen photos of it happily shared on social media, but it’s somewhat surprising that it is the only sweet breakfast item on the menu.

“It is an area where we are trying to grow and evolve moving forward,” Nickell said of its sweet breakfast offerings. “The French toast has been a huge hit. We want to adapt and provide more options moving forward. We want to make sure we can provide something that is unique and fresh to the area.”

The easy answer would be to add a pancake or waffle addition to the menu, but how do you do that in a way that is new and unique? El Huevo’s closest analogs in Oklahoma City are Latin breakfast powerhouses Cafe Antigua and Cafe Kacao. El Huevo is offering a different style from Kacao’s very popular crispy brioche French toast, and Kacao has the market covered with its pancakes covered in its sweet lechera sauce. Antigua’s only sweet offerings are waffles with bananas and a bowl of oatmeal with sweetened condensed milk and fresh fruit.

I think El Huevo could expand its offerings by trying some specials first and seeing what sticks. I like the idea of oatmeal with dulce de leche and fruit or perhaps a spice-filled espresso waffle. Mix espresso grounds into the batter with cinnamon, brown sugar and allspice, and top it with a sauce made with condensed milk; I’m just spit-balling here. I’m sure the chefs will come up with some tasty options in the coming months.

Off the top of my head, I can only think of a handful of places in Oklahoma City that offer them: Los Comales at 1504 S. Agnew Ave., Tacos San Pedro at 2301 SW 44th St., Taqueria Rafitas at 1222 N. Pennsylvania Ave., Big Truck Tacos at 530 NW 23rd St. and the multiple Torchy’s Tacos locations. I know I’m missing some, but out of all of the taco options in the city, you’d think there would be more. Please send me places that I’ve missed.

I was excited to try El Huevo for the first time after a few positive experiences at Neighborhood JA.M. It’s impossible for me not to compare the two, but I quickly found that El Huevo has a little more emphasis on its cocktail program. It doesn’t offer specialty coffee like lattes and cappuccinos like neighborhood JA.M. El Huevo only has drip coffee and iced coffee, which is available in three cocktail versions, like the Mr. Sancho that pairs tequila, iced coffee and Baileys Irish Cream with a chocolate doughnut garnish.

“I really spent a lot of time trying to focus on the development of fresh and creative cocktails for the bar,” Nickell said. “We had discussed offering lattes and cappuccinos but decided that really wasn’t where we wanted to be slotted. Our focus is fresh ingredients like juices, fruit and vegetables. Liquor and wine have proved to be a much bigger mover than beer, which was a surprise to me.”

I started the meal with queso while eyeing the chicken enchilada dip, but the queso did not disappoint. I also tried the tamale platter and the puerco rojo and preferred the tamale platter. The house-smoked pork was juicy and had nice, smoky finish but needed to be crisped on the flattop for more texture. I didn’t enjoy the accompanying rojo sauce as much; it lacked a pop of acidity and chile flavor. You can add a beef tamale or cheese enchilada to any dish for an additional $1.99, and I can vouch for the addition of the tamale.

The same rojo (also listed on the menu as ranchero) sauce was used on the tamale platter, but the beef has more chile spice and made it come alive more, especially when the yolk from the over-easy egg ran over everything. I will order the huevos rancheros over the puerco rojo the next time I dine at the restaurant.

Despite a little disappointment in the sauce, I found the service to be friendly and quick — a hallmark of Hal Smith — and I think the concept has plenty of room for expansion.

What works:The tamale platter is elevated by spicy beef and the runny yolk of an over-easy egg.
What needs work:The ranchero sauce on the puerco rojo lacked a pop of acidity and chile.
Tip:Add a tamale or cheese enchilada to any dish for $1.99.