Hamburger fans will have reason to rejoice this summer, as Nic’s Grill owner Justin Nicholas (pictured) is opening a second location — Nic’s Diner and Lounge — at 1116 N. Robinson Ave. in Midtown.

Hamburger fans will have reason to rejoice this summer, as Nic’s Grill owner Justin Nicholas (pictured) is opening a second location — Nic’s Diner and Lounge — at 1116 N. Robinson Ave. in Midtown.

“It’s going to be an all-around diner. We’ll serve what I do — comfort food — in a nice environment,” Nicholas said. “We’re going to do it all: breakfast, lunch and dinner and a full bar downstairs.”

The planned two-story venue will likely open this summer, Nicholas said. Construction is now underway and will include a basement lounge.

He said he’s not changing a thing about his longtime location on 12th Street and Pennsylvania Avenue.

After five years at 6714 N. Western Ave., the upscale New American eatery is opening a second location in a familiar Bricktown spot: in the former location of Nonna’s Euro- American Ristorante and Bar, 1 Mickey Mantle Drive.

West owner Rick Haynes said the conversation has been going on for months, as the restaurant is looking to expand.

“We’re doing a complete remodel on Nonna’s.,” he said. “We want to make it as similar to the original West as we can.”

Haynes said they’re especially excited to offer more private dining areas — something Nonna’s had in spades — and continue using the patio space to their advantage. The menu will remain largely the same, though the restaurant will expand its selection of steaks with prime, hormone-free beef.

Haynes hopes the remodel will be done in 120 days, opening in August. 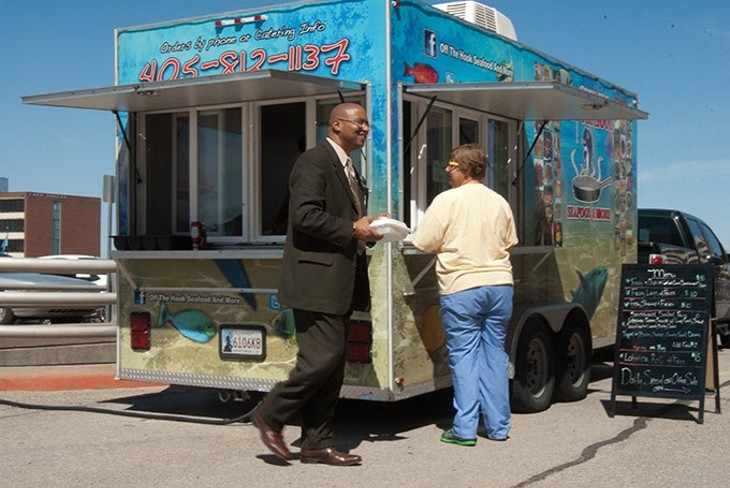 Off the Hook Seafood & More food truck will soon have a brick-and- mortar location on Britton Road and Broadway Extension.

Owner-operator Corey Harris originally planned for a mid-March opening and said it has been a frustrating wait for the leaseholder to sign the property over so they can get started. As a former Starbucks location, it’s a turnkey restaurant, which means Off the Hook can begin cooking almost right away, he said.

The new location means adding lots of new items to the menu.

“We’re going to bring a lot of new stuff Oklahoma has never even heard of before,” he said.

This does not mean the restaurant’s mobile aspect will vanish. The trailer will make appearances at monthly events like Premiere on Film Row the third Friday of each month and at The Bleu Garten.