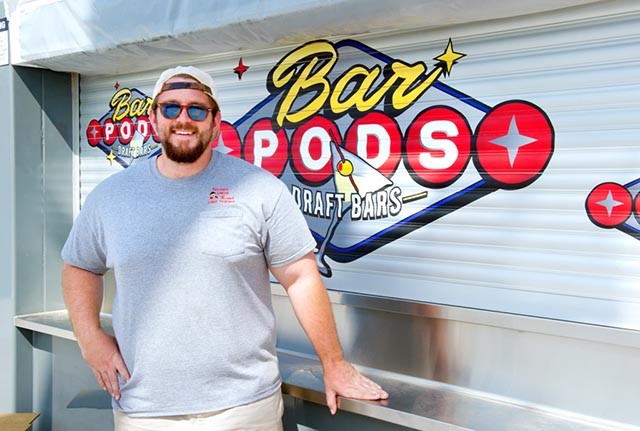 Hunter Wheat is putting the finishing touches on his food truck park, The Bleu Garten. The welcome addition to Midtown has been abuzz in OKC since we first talked with Wheat in April.

The once-vacant lot at 301 NW 10th St. can only be described as “transformed,” as little remains to be done to make OKC’s year-round food truck haven ready.

The site will feature space for up to 12 trucks with permanent bathrooms, a bar, a beer pull, a fire pit and covered seating. The official word at press time is that there will be a soft opening Sept. 18-19 and a grand opening Sept. 20.

Stay tuned to www.bleugarten.com and on Twitter at @BleuGarten for more updates. The Bleu Garten also has teamed up with local food truck app Truck It OKC to offer special sections devoted to what is sure to be a favorite outdoor dining space in Midtown.

Friday evenings are always a treat in Midtown with Urban Agrarian and its mobile market, 1235 SW Second St. Friday nights bring it to a happening location with live local music. Hang out and see what’s fresh and local starting at 1 p.m. each Friday.

There will be live music by acts including Andy Brewer and Taddy Porter 4-6 p.m. What better excuse to step away from the office for a minute than to take in what’s in season?

Due to the growing pains going on in Midtown, the easiest way to get there is to take Hudson south and look for the pretty green truck. It will either be parked on Walker or Hudson avenues at NW Ninth Street.

The truck offers the complete selection that is available in the store, including frozen and refrigerated items like dairy and meat as well as fresh local produce.

Recent construction has posed its challenges, but the turnout has been good nonetheless. Pro tip: Get there early, as food never lasts until the sundown closing time. The market tends to run out of items during the after-work rush. (A perfect excuse to ditch out a little early on Fridays. We won’t tell.)

If you’ve tasted the chocolate made by Bedré Fine Chocolate, an Oklahoma company owned and operated by the Chickasaw Nation in Davis, then we don’t have to tell you much about it. The premium confections are available both online and at local retailers around the state, including the newly opened Exhibit C in Bricktown, 1 E. Sheridan Ave., Suite 100.

The company has combined the charms of its chocolate with a 100 percent Arabica coffee in two flavors: dark and milk chocolate.

“There is a unique kinship between the aroma and flavor of chocolate and coffee, and Bedré has achieved what I believe is the perfect blend of the two,” said Bedré General Manager Philip McWherter in a media statement.