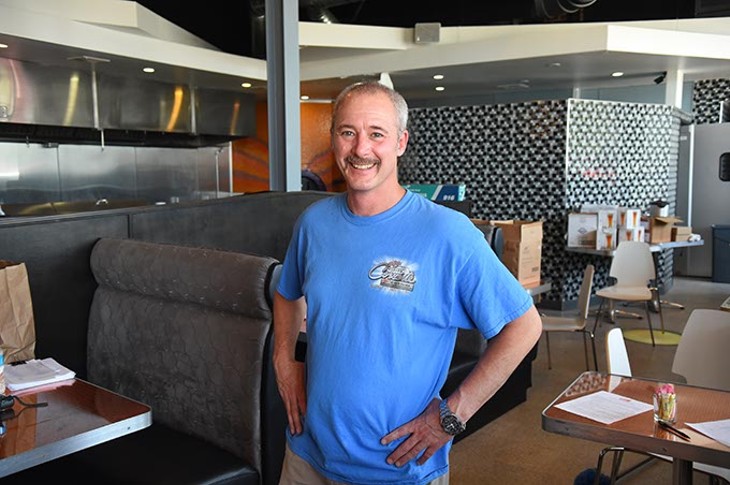 Midtown is getting another new restaurant and watering hole this fall with the expected launch of Gigglez Bar & Grill.

Owners Marty and Casey Phillips are renovating the spaces previously held by Saturn Grill and The Candy Store, 1016 N. Walker Ave., for a restaurant, bar and twice-a-month comedy club.

“There’s really only one comedy club in the city,” Marty Phillips said. “I kind of enjoy it. It’s not just a bunch of drunks. You’ve got drunks laughing.”

As the city and the local comedy scene grow, he said Gigglez will be a good place for dinner, a drink and some laughs. The menu will take advantage of the pizza oven left behind by Saturn Grill while adding gourmet burgers and sandwiches. The restaurant will also serve boba tea and smoothies.

In addition to a 10x13-foot raised stage, Gigglez will have a VIP area on the mezzanine, which can also be used as a meeting space.

Phillips said he hopes to open within the next two months, depending on construction and permits.

Self-appointed vine voyeurs at Wine Spectator Magazine have named a few Oklahoma restaurants to its list of the best restaurants for wine lovers.

Opus Prime General Manager Billy Wilson said it has been on Wine Spectator’s list for the last several years because wine is an integral element of the restaurant’s culture.

At Museum Cafe, Manager Lauren Garcia said it has a selection with more than 300 wines, including every varietal you can think of.

“We have about 20-24 by-the-glass options,” she said. “We also do wine flights so you can try 2 or 3 ounces of several different wines.”

Fresh off being named two of

Eater.com’s culinary Young Guns, chefs Andon Whitehorn and Colin Stringer will try to win over a tougher audience during an administrative hearing at Oklahoma City-County Health Department (OCCHD) next week to decide the fate of their private supper club, Nani.

“The administrative hearing will determine if their case goes forward,” Whitehorn said.

If judgment comes down against Nani, Whitehorn and Stringer will decide whether or not to appeal in district court.

While some assert that the sanctions imposed by the health department shut Nani down, Whitehorn said they had already decided to take a break after holding a number of pop-up events in Oklahoma and Texas.

“This hasn’t stopped us from operating,” he said. “We’re just taking a summer vacation.”